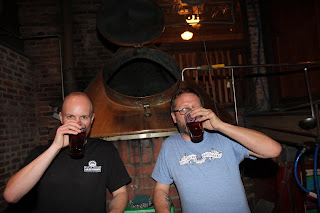 Photo, above: Brian and Steve enjoying a beer
during a collaboration brew day.

No, you're just getting started then. Those first two hours
are a good warm-up to the many other events going on
that night. 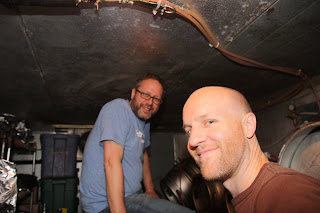 Photo, above: Steve (left) and Brian in the firkin cooler
in the bowels of Pratt Street Alehouse.

The best of which just happens to be happening at Pratt
Street Alehouse, beginning around 9. Brian Strumke of
Stillwater Artisanal Ales and Steve Jones of Pratt Street
(Oliver's Ales) will be on hand to debut their second
collaboration brew, Channel Crossing number 2.

The beer is described by Jones as "A Belgian take on
an English Nut Brown Ale. We used Belgian dark candi
syrup in it, among other things."

See you tomorrow night!
Posted by Chuck Cook at 6:39 AM