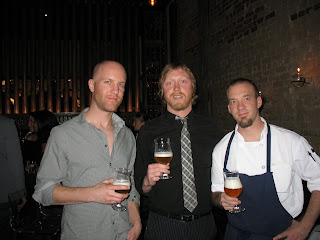 On Saturday, Beer Director Greg Engert and crew held a small
invitation-only gathering. The star of the show, so to speak, was
"Year 1: a Birch and Barley/Church Key Anniversary Ale" brewed
by none other than Brian Strumke of Stillwater Artisanal Ales. 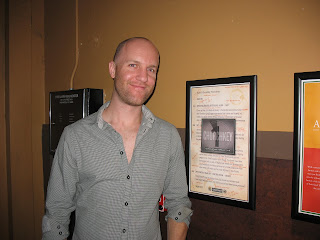 In Brian's own words:

"It has been one year since Church Key / Birch & Barley has opened it’s doors, and it that small span of time they set to elevate the level of what a beer bar / restaurant can and should be. For this occasion their beer director Greg Engert approached me to see if I could prepare a special offering. We decided to pull together chef Kyle Bailey, Greg, and myself to devise a recipe to be paired with their tasting menu for the week of their anniversary. The outcome is a delicate hazy blond ale brewed with Perle, Nelson Sauvin, and Hallertauer Mittelfrüh hops and lightly spiced with toasted juniper and guinea pepper. The brew was then fermented with a mix of Belgian ale yeast and Brettanomyces Claussenii, providing an aroma of tropical fruit and mild spice with flavors following it’s course melded with soft malts."

Most importantly, you ask, how did it taste? Delicious.
Only two sixtels were produced, so it won't last long.
In fact it may be already all gone. 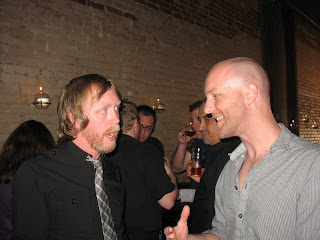 Photo, above: Greg Engert and Brian Strumke inside Birch and Barley
Posted by Chuck Cook at 9:06 PM