Max's Taphouse: the Fifth Annual Belgian beer fest is best one yet 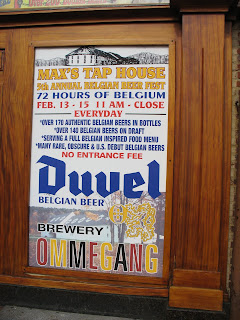 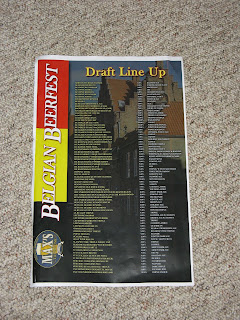 Photo: the draft menu for Friday the 13th. The menu was updated each day of the event, as kegs blew and new ones were put on draft.

"Over 300 kegs of beer were served over the weekend, and over 100 cases of bottled beer were also consumed by fest attendees" Casey told me.

He continued: "This was the biggest and best one yet, and we promise next year's will be even better!"

I have been on quite a sour beer kick since last spring, and enjoyed many samples of Cantillon Fou' Foune, Iris, and Grand Cru Bruocsella over the weekend.

Three very special treats from Geuzestekerij Hannsens of Dworp were big hits. The Jonge Lambiek (Young Lambic) and Oude Kriek (Old Kriek) on cask were superb, as was the new Experimental Cassis in 375 ml bottles.

I look forward to the sixth annual Belgian beer fest in 2010! 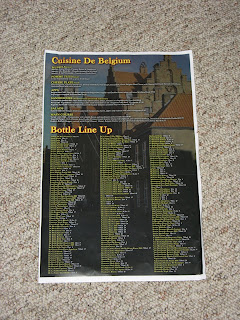 Brouwerij Westvleteren has a brand-new bottling line. A new Seamco machine replaces a circa 1978 bottler that was used previously.

Brother Joris, the manager of the brewery, told me in an e-mail last week that the he and the other monks of De Sint-Sixtusabdij have used the new bottler several times, and that they are very content with the new machine.

My friend Danny van Tricht was the first journalist to see the new line, and he has the first photos of it here:
New Bottling line at Westvleteren
Posted by Chuck Cook at 10:09 AM 1 comment:

Belgian cafes article is the cover feature in Beers of the World magazine, issue 22 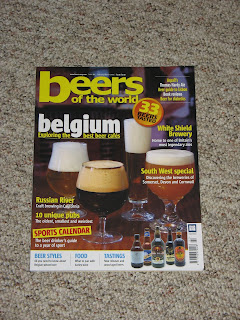 I am very happy to say that I have the cover feature in the newest issue of Beers of the World magazine, which is the premier beer magazine in the United Kingdom.

I last had an article in Beers of the World (also the cover feature!) in issue 16, in early 2008.
In "Beer Country: Belgium" I wrote about 35 great Belgian breweries in a 1,650 word piece, as well as ten great beer fests.

This new article in issue 22 is my fifth overall in the magazine since early 2007. I also have had articles published about Bierhuis Kulminator; Breweries and Cafes in Brussels; and Belgium's female brewmasters. See: Beers of the World author Charles D. Cook

Editor Sally Toms sent me a copy of issue 22 (February/March 2009) last week. My article "Celebrating Cafe Culture" is 2,000 words in length, and a dozen of my photographs were used. All the photos except the one on the first page of the article are mine.

The article is about the great beer cafes that are located outside the well-known, well-traveled cities of Antwerp, Brugge, Brussels and Ghent-though you'll see a couple of photos from cafes in those cities in the story.

Great cafes like De Heeren Van Liedekercke in Denderleeuw, De Gans in Huise, De Rare Vos in Schepdaal, Cafe Yes in Libramont and Le Vaudree in Angleur (Liege) are discussed, among others, as are beer recommendations.

Many thanks to Sally and the Beers of the World staff for their frequent and excellent promotion and coverage of Belgium and its great beer culture.

I'm just one of the many writers that pen articles about Belgium in BOTW.
In 2008, articles were published about 't Brugs Beertje by Jeff Evans; the Achel Trappist brewery by Roger Protz; as well as a big feature on ten great Belgian beer fests that was co-authored by my friend and colleague, Joe Stange of Brussels. There were several other Belgian articles published as well.

I was happy to see that Joe also has a feature on beer drinking in Lisbon, Portugal in this new issue.

There is also a fine article about Russian River brewing in California, by Chris Galvin. It's well illustrated, with ten photos inside the brewery and tasting room.

Copies of Beers of the World are available at many Barnes and Noble stores, as well as other bookstores and newsstands, in the U.S.

It might be 2 or 3 weeks till this issue appears stateside, as copies have to be shipped from the U.K. 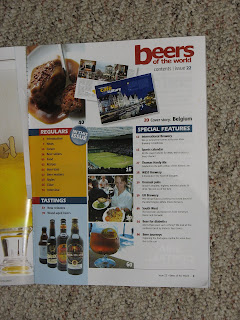 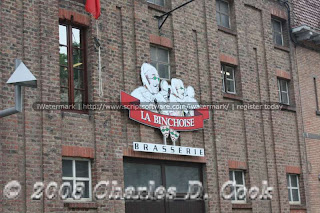 The February/March issues of many beer publications are starting to arrive at beer bars, beer stores, brewpubs and bookstores, and I'm happy to say I have four new Belgian beer articles coming out this month.

The first is an article about Brasserie La Binchoise of Binche, Belgium. My 650 word piece in Celebrator Beer News covers the brewery, located in Hainaut Province, Wallonia.

I visited with brewer/owner Bruno de Ghorain and his cousin, Benoit, back last May 31st.

Benoit handles sales, marketing and also some brewing. It's a family affair.

The brewery has a very atmospheric tasting cafe open on weekends and by appointment for visiting groups. I really enjoyed the beers, several of which are available in the U.S.

Here in the mid-Atlantic, copies of Celebrator are available at places like Max's on Broadway in Baltimore, Monk's in Philly, Mugs Alehouse in Brooklyn, RFD and the Brickskeller in D.C., and all the Capital Ale House locations in Richmond and Fredericksburg, VA. 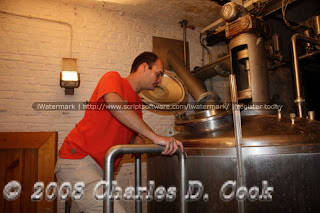 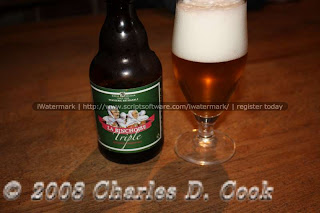