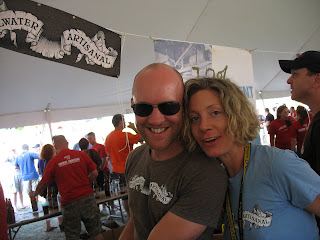 In just one week, the celebration of all things beery in Charm City begins.

The second edition of Baltimore Beer Week kicks off on Thursday,
October 7 at the Baltimore Musuem of Industry on Key Highway in
Federal Hill.

There are already 325 individual events planned over the course
of the ten day event, which ends Sunday October 17.

Lots of fun stuff there. But you know what I specialize in.

The title of this blog says it all. Belgian Beer Specialist.

That means Belgian-style beers too.

Not that I don't like IPA's, palate peeling Double IPA's,
session beers or Prima pils. Cause I do. Just ask around.
Drop a six pack of Two-Hearted Ale or Celebration at my doorstep.
It won't be there for long.

But there's plenty of people writing about those brews. 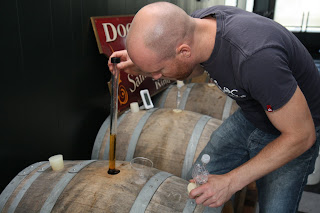 Photo, above: Brian pulling a sample of a special brettanomyces-
infused, barrel-aged beer at his main brewery in Maryland.

So it's Baltimore Beer Week, and the guy turning everybody's heads
via their taste buds with his world-class Saison-inspired brews is
Mr. Brian Strumke, brewer/president of Stillwater Artisanal Ales.

Brian's been off brewing in Denmark and Belgium lately, but he'll
be back soon. Just in time for Baltimore Beer Week. 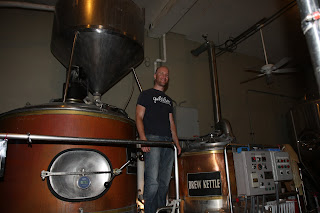 Brian in the brewhouse at his main brewery, Dog Brewing in
Westminster, Maryland.

Brian's premier event will be Sunday, October 10, from 10 am
to 3 pm. The locale: the friendly confines of Max's Taphouse,
Maryland's number one beer bar.

As Brian's first commerical brews debuted at Max's Belgian fest
in February, it's only fitting. Max's General Manager, Casey Hard,
has been a big supporter of Stillwater Artisanal Ales. Multiple
events have been held at Max's in the past seven months, with
special and rare Stillwater brews often seen on tap there.

You could say Casey knows a good thing when he sees it. 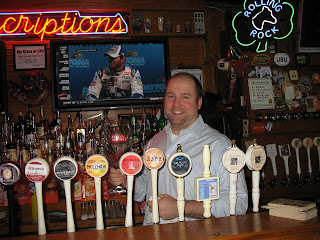 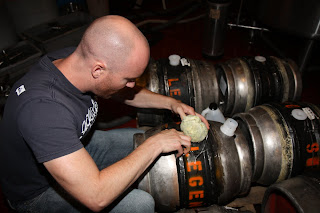 Photo, above: Brian putting dry hops in a cask of Cellar Door.

This lineup for the Max's event just in from Brian, today:
(he took a little break from a long brew day at Huisbrouwerij
St. Canarus, so I could get the word out)

and, drum roll please....a "Rare Beer 101" bottle release!
This one is "Requisite", which is described as an "Imperialistic" Stout.
Only 75 twelve ounce bottles were produced of this new brew.

Brian also mentioned "various casks" will be on hand.
Yum. It's gonna be a long, enjoyable Sunday....

Space is limited, so you have to RSVP Casey to reserve space. 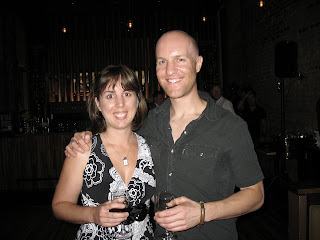 Photo, above: Brian and his sister, Brenda Strumke, at
Birch and Barley, Washington, D.C.
Posted by Chuck Cook at 8:01 PM