A pair of special new brews from Brouwerij Rodenbach 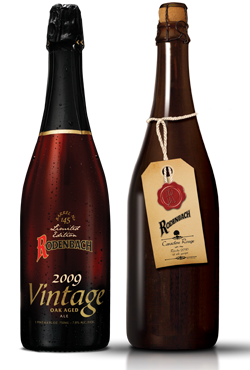 Rudi Ghequire and his staff at the Rodenbach brewery
in Roeselare, West Flanders have been busy.

When I last visited the venerable brouwery in June
2010, Rudi told me he had some projects he was working
on, but that he could not discuss them until they had
come to fruition.

A couple of them have now, I'm happy to say!

Rodenbach Limited Edition Vintage 2009 was just released
in Belgium this month. Vintage 2009 was aged in foeder
number 145 for two years. The taste is described as complex,
full, spicy and refreshing.

Foeders are, of course, the huge oak barrels Rodenbach ages
its beer in. There are 294 of these massive tuns, some as
many as 150 years old.

Rodenbach spokesman Peter Buelens said: "There are notes of
caramel and green apples mixed with an oak character in the
background. The soft, sour, fruity aftertaste is long and
well balanced."

I'm really looking forward to tasting this, as Rodenbach
is one of my favorite breweries! The site is really a Belgian
national shrine.

The second beer is even more special, and will be vastly more
hard to find: Rodenbach Caractère Rouge.

Rodenbach Caractère Rouge is aged in oak barrels for two years.
The resulting brew was then steeped in cherries, cranberries and
raspberries for six months. It was then bottled with yeast so a
bottle fermentation would occur. (Yum, seriously. Sounds like
it will be a great beer!!)

Only 900 bottles of this beer were filled, so it will surely be
a hot commodity. It also weighs in at 7% abv.

Geunes commented: "The Rodenbach Caractère Rouge has a subtle
fruity nose of raspberry and cherry, with wood and caramel notes.
There is also an aroma of violets, and hints of leather and
light tobacco. In short, it is a beer with a vinuous aroma.
On the first tantalizing taste, there is crisp acidity. The
taste is then soon countered by a pleasant residual sweetness
and delicate dryness produced by the cranberries. They give the
beer a long, clean and very pleasant aftertaste.
The three fruits used together provide an effect that is clearly
not to be missed. When I taste this Rodenbach, I just think a fresh
burgundy wine."

I hope I am able to taste Caractère Rouge on a future trip to Belgium!
Posted by Chuck Cook at 1:37 PM 1 comment: 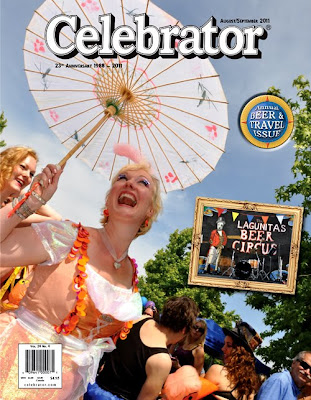 I have a 700+ word article in the August/September issue
of Celebrator Beer News on Brussels' great "new" bar,
Moeder Lambic Fontainas. 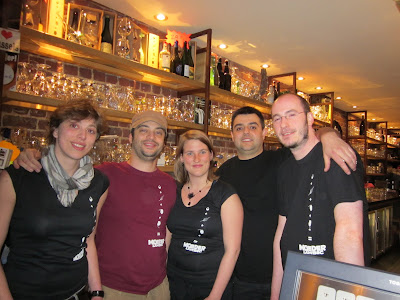 (Photo, above: most of the crew of Moeder Lambic
Fontainas. From left: Cynthia Paladini, Nassim Dessicy,
Julie Posschelle, Jean Hummler, and Andy Mengal.)
With 40 beers on draft and six beer engines, you can
spend a lot of time at Place Fontainas #8. And it would
be time well spent. Assuming you are a beer lover.
But you wouldn't be there if you weren't a beer lover,
would you? 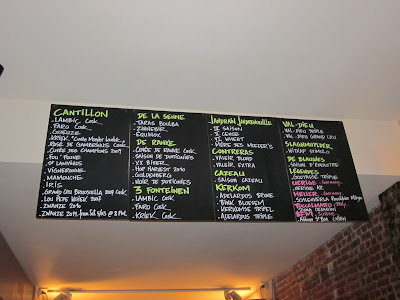 (Photo, above: the beer blackboard. Mouth-watering, no?) 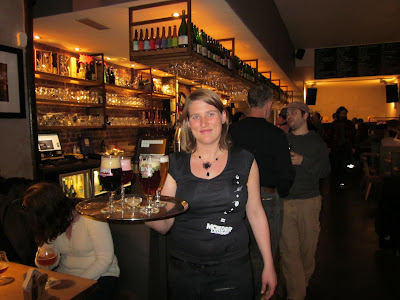 (Photo, above: pictured with the article is Julie Posschelle.)
You can find Celebrator Beer News at better bars, brewpubs,
breweries and other beery spots. Locations in my area include
Max's Taphouse in Baltimore; RFD in Washington, D.C.;
Monk's Cafe in Philly; and Sly Fox in southeast Pennsylvania,
among other locales. See: Celebrator
Posted by Chuck Cook at 3:54 AM 4 comments: