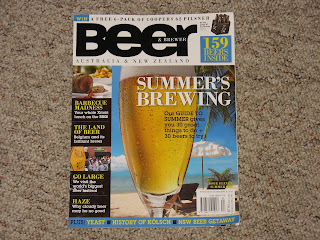 I'm happy to say that I just had my first article published in the
beer magazine "Beer & Brewer Australia & New Zealand."

I cover some of the country's top beer spots, such as 't Brugs Beertje
in Brugge, Brasserie Cantillon and Moeder Lambic in Brussels, and
Bierhuis Kulminator in Antwerp.

Beer & Brewer can be found at some Barnes and Noble bookstores and
other bookstores with International selections in the U.S.

Copies can be ordered on-line at: http://www.beerandbrewer.com.au

I'll report back in a few weeks about yet another Belgian article in
a new beer magazine!
Posted by Chuck Cook at 6:41 AM 1 comment: 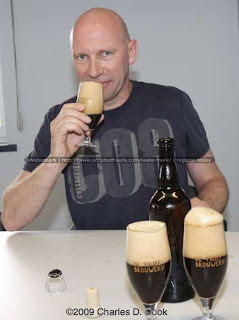 Photo: Dirk Naudts of De Proefbrouwerij, with a glass of Van Twee

On the 27th of April, I visited De Proefbrouwerij in Lochristi, East Flanders. I interviewed Brewmaster/Owner Dirk Naudts for several hours, as we toured his state of the art brewery. 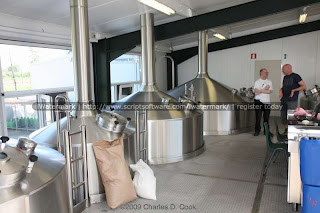 
While there, Dirk suggested that we taste his latest collaboration beer, called Van Twee (meaning “From Two” in Flemish.)

“John Mallet of Bell’s Brewery in Kalamazoo, Michigan and we here at De Proefbrouwerij brewed this beer when he visited in early March, 2009” Dirk told me as we sipped the dark, rich brew. “It’s kind a Porter, but also sort of a Belgian Dubbel as well” Dirk explained. “We added fresh cherry juice pressed from sour Michigan cherries. This gives a dark, fruity character to the beer. Also, the bottling conditioning sugar comes from Michigan sugar beets” Dirk remarked.

As we savored the Van Twee, which, at 7.5% abv, is remarkably easy to drink, my friend Carl Kins of Kortrijk said: “It’s like Irish coffee. There are three layers!”

I found the beer very much like a Dubbel/Porter combination, with a relatively medium bodied Dubbel-like mouthfeel, and pleasing funky character. I look forward to getting a bottle and seeing how it has developed over the six months since I tasted it at the brewery. 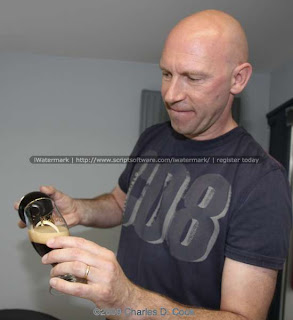 "Each year it is my pleasure to invite a noted American brewer to participate in the Collaboration Series,” noted SBS Founder Alan Shapiro. "I am thrilled with the beer that John & Dirk have designed and believe specialty beer enthusiasts will find it a unique and rewarding experience."

Get it while you can! 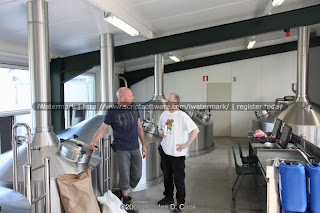 Posted by Chuck Cook at 8:49 PM No comments: