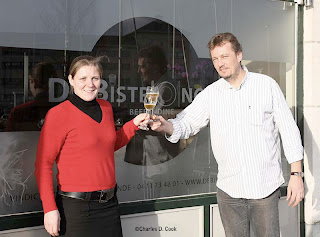 I'm happy to say that I have a 750 word article on the beery delights
of Belgium's port city, Ostende, in the October issue of Celebrator Beer News.
I cover Hotel Marion and 't Bottelje, which are connected to each
other and under the same ownership. "The Little Bottle" stocks 300
beers and has good food. 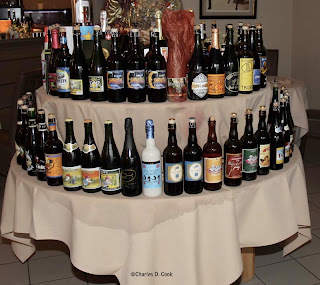 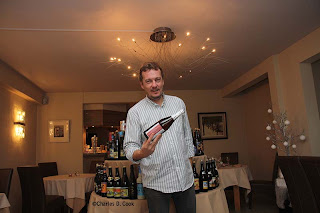 Photo, above: Christophe Pelfrène with a bottle of
De Bistronoom, the house beer of the restaurant. It
is brewed at Brouwerij den Tseut, and has 10% abv.
This brew has a whole hop flower added to it at bottling,
adding to the hop aroma and bitterness of the beer.
Stefanie de Vos and her partner, Christophe Pelfrène,
craft superb multi-course meals and pair them with Belgium's
excellent beers.
De Bistronoom offers meals cooked in beer as well. On my visit
May 31, my group enjoyed a fine lunch, with seafood being heavily
featured. The tuna steak was delectible, as was the dessert course,
custard paired withOak-Age Alvinne Melchior. Oysters, another
fish plate and veggies also impressed. 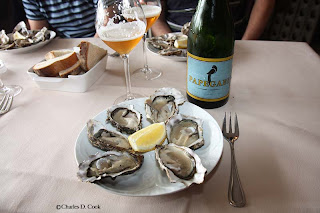 Photo, above: Oysters at De Bistronoom.
My recommendation: get to this world-class "cuisine a la biere"
restaurant if you go to Belgium! It's a mere three minute walk from
Ostende's train station, so there's no excuse for not doing so. 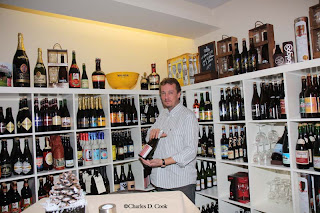 Photo, above: Christophe Pelfrène, with a great array
of Belgian brews. 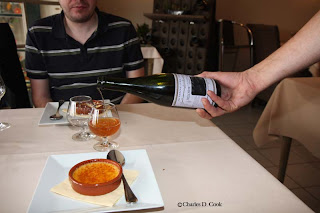 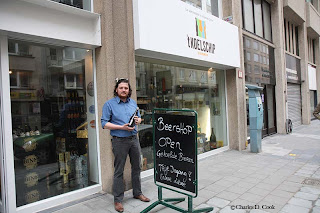 Photo, above: Ive Mostrey of 't Koelschip
Also covered: Ostende's excellent new beer shop, 't Koelschip.
The shop carries over 500 different beers already, and plans are
to get that number to 1,000 over time. "The Coolship" is owned
by Ive Mostrey, a friendly, dedicated beer  lover. Ive can offer
tutored tastings for groups. See http://www.koelschip.be/. 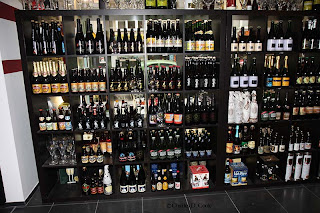 Photo, above: a shelf full of Belgian brews at 't Koelschip.
Posted by Chuck Cook at 5:00 PM