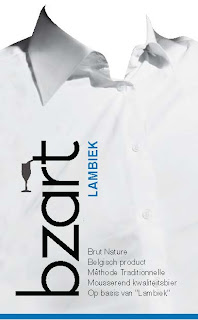 Geuzestekerij Oud Beersel has been quite a success story
since it was purchased by Gert Christiaens and his father
Jos in 2005. The old brewery has been beautifully preserved,
and they have added much more lambic fermentation capacity-eg,
more barrels, in the last couple of years. 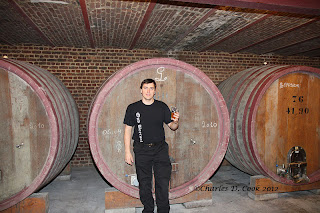 Photo, above: Gert Christiaens in front
of a foeder at Oud Beersel.


Gert works closely with the new Lambic Beer Visitor's Center,
De Lambiek, and is running tours from Brussels to De Lambiek
and Oud Beersel on Saturdays this summer. See here for details.

Another exciting new project is one that I can tell you about now.
Beer and wine enthusiast Luc Dirkx, originally of the Maasland
region of the Netherlands, just over the border from Limburg
Province in Belgium, has partnered with a winemaker in Limburg,
and the Oud Beersel lambic blendery in Beersel, to create a sort of
lambic  champagne beer.

"Bzart Lambiek" is a 13 month old lambic from Oud Beersel,
finished with a champagne yeast. The lambic was placed in
barrels in December, 2009. The Champagne yeast and sugar
were added at bottling, to spark a refermentation in the bottle. 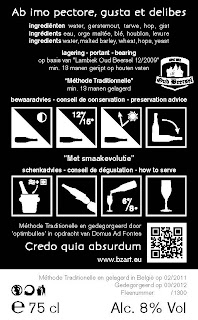 Image, above: the back label of
the Bzart Lambiek.


Prior to this, the 1,300 bottles in the 75 cl size of this brew
underwent what is referred to as "Méthode Traditionnelle."
This would be called the "Method Champenoise" when
dealing with a true Champagne.

A sparking wine maker, Guy Geunis, performed the riddling and
disgorgement process at his location in Borgloon. Geunis sold his
wines under the clever name "Champinnot" for years, before being
recently forced to change the name by champagne producers in
France. The new name is "Optimbulles" meaning "Optimum
Bubbles."

You can see photos of Dirkx and Geunis, and articles about the
venture (in Dutch) at these websites:

Geunis, with childhood friend Dirkx, and the local wine club,
Domus Ad Fontes, will market the beer in top Belgian restaurants.
These include De Karmeliet in Bruges, Couvert Couvert in Heverlee,
near Leuven, and Brasserie Latem in Sint-Martens-Latem, among
others.

A photo taken at the Michelen-starred De Karmeliet shows it is
offering glasses for 15 euro and bottles for 75. Certainly, a
Champagne price. 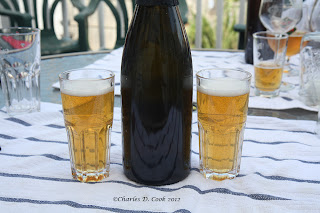 Photo, above: Bzart Lambiek. I received a bottle on
May 1st, before they were labeled.


Gert presented me a bottle on May 1st, which I enjoyed with
friends a few weeks later stateside. I found it to be a fine beer,
very well balanced, with a mild tartness, and very bubbly. In
fact, Dirkx, Geunis and the wine club were aiming for maximum
effervescence, and they certainly hit the mark.

Gert tells me they have 250 bottles on hand for sale at Oud Beersel
as of yesterday, and that another 1,000 will be sold in restaurants
in Belgium.

None is slated for export this year. "More will  be produced in 2013,
and we hope to export some then," Gert added. Better get yourself to
Beersel asap if you want a bottle!

Some even better news is that other versions of Bzart are already
in the works. Limburg Province is Belgium's primary fruit growing
area, and hence, Dirkx plans fruit-infused brews. Cherries,
strawberries, and perhaps other fruits will be among those used.
I look forward to tasting the "fruits" of his labors!