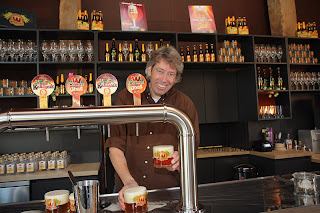 Last September 24, I visited Brouwerij and Alcoholstokerij
Wilderen in Wilderen, near St. Truiden, in Limburg province.
This place is nothing short of amazing, with an intact distillery
dating to 1890, as well as a new distillery and  brewery, on site.
There is seating for 500 people outside on the terrace (patio) in
good weather, and there is seating for a couple of hundred more
inside in a huge barn which has been converted into a tasting
room. The barn originally dates to 1743. 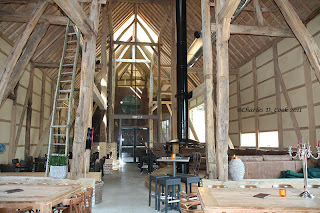 The new brewery officially opened on July 9, 2011. "We
started with two beers. One is a blond called Wilderen Goud,
a simple beer of 6.2% abv, brewed with one hop, and no spices.
This is our beer for the masses, as we don't sell any other brews
here. Nothing from any of the big companies. It's a pleasant
enough beer that you could have several in an evening. Our
other beer is a Tripel called Kanunnik, which is brewed with
four grains: barley, oats, wheat, and rye. It also has three
different spices and two hops in its recipe, and contains
8.2% abv," co-owner Mike Janssen told me last year.
Janssen's business partner is also his wife, Roniek Van Bree. 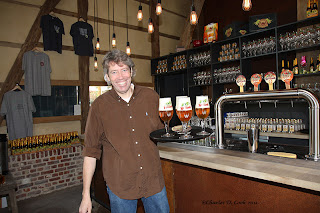 "We do have eight taps here in the bar, so my plan is to have
that many different beers within about three years," Janssen
added. 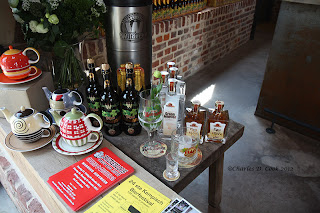 Janssen produces a Graan Jevener (32% abv) and an Eau-de-Bière
of the same strength in his new micro-distilley. As to the old, 1890
distillery on site, he commented: "This is the largest distillery of its
size and age still in existence anywhere in Europe. It's amazing the
Germans never found it during either World War." 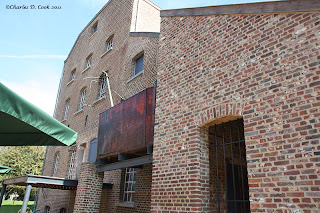 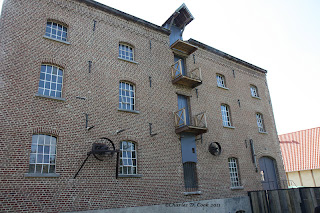 The German army took most of the copper kettles in Belgium
during the First World War to make armaments with. 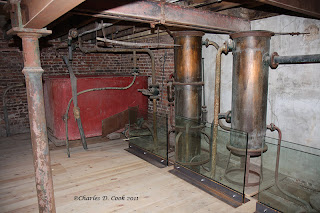 Janssen has worked at cafes and breweries in Belgium for
24 years: "I started at Riva in Dentergem in 1988. I was
involved with other breweries and cafes, including Brouwerij
Ter Dolen, over the years. Now I hope this is the last one I
will ever open. I have everything I want right here," he
remarked, grinning. 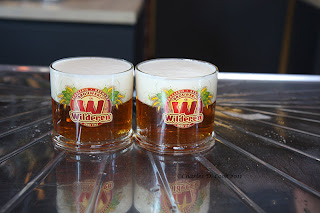 Janssen clearly knows how to market his products. With specially
made glasses, bottles, coasters, shirts, and other beery items, he
offers a full range of mementos. Wilderen also offers pralines
(chocolates) and a delicious cheese called HopKaas. 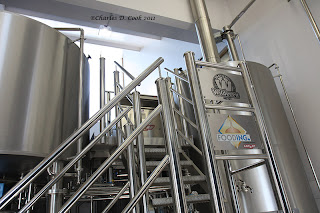 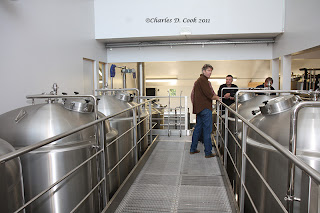 There are a couple of rows of 40 and 50 hl fermenters, and
beers are kegged on site. Beer is sent via tanker to Brouwerij
Huyghe for filling in 33 and 75 cl bottles. 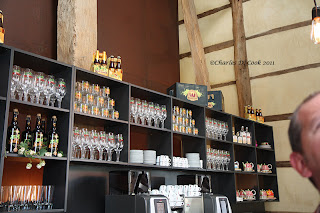 The water source used is the same 92-meter (300+ feet) deep
well that was used by the 1890 distillery. "We make about one
liter of beer per four liters of water," Janssen commented. The
spent grain is given to a farmer with 600 cows: "They are the
happiest cows in the region," Janssen added, smiling. 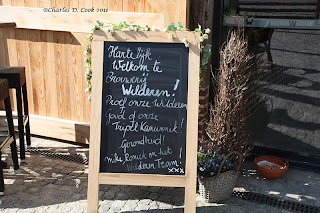 This place moves some alcohol, there's no doubt about it!!

As of today, Janssen tells me they have filled about 10,000
bottles of the spirits, mostly the Eau-de-Bière.

I think can feel a shot of that one coming on tonight. 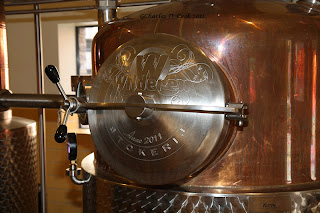 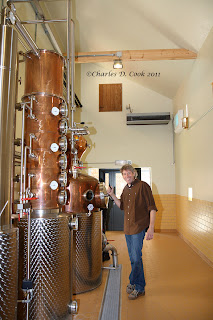 "I also have twelve 200-liter former Jack Daniel's and Buffalo Trace
barrels full of a Wilderen Whisky Single Malt, that will first be
released to the public on August 2, 2014," Janssen told me and
my Belgian companions. "The whisky must stay in the barrel
for a minimum of three years,"he added. 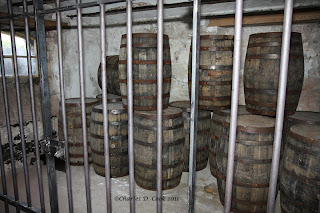 There are also some old huge oak barrels in place that could be used
for wood-aging, and Janssen made it a point to add that Limburg
Province is the fruit-growing region of Belgium, and that there
are cherry trees on site. In fact, a cherry beer of 3.5% abv was just
added this year. 95% of the Wilderen beer is sold on-site, as well
as in a few select cafes in the Netherlands.

Exportation to the U.K., Italy, France and the U.S. is expected in
the near future. Wilderen is having additional fermenters added in
September or October, which will boost yearly capacity to 10,000 hl
of beer per year. The brewhouse itself could easily do 20,000 hl per
year, if demand-and fermentation capacity-allows.

Brouwerij and Alcoholstokerij Wilderen has even been nominated
as one of the top five monuments in Flanders for 2011. The winner,
which receives a 12,500 euro prize, will be announced in Brussels
on September 3. Being beer-related, I know who I will be pulling
for!!

That's a good sample, though I actually took 324 on my visit. 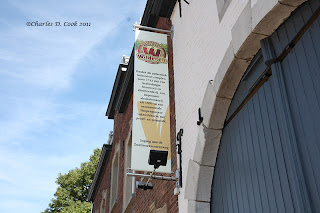