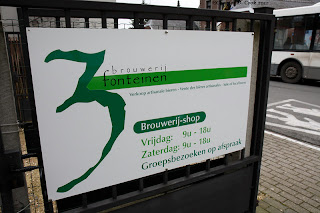 One of the world's most beloved producers of sour beer will celebrate
a new beginning in just a couple of weeks.

3 Fonteinen ("Three Fountains") of Beersel, Flemish Brabant, will
open their doors to the public from Thursday, August 30, through
Monday, September 3.

The occasion: the unveiling of their new brewery, right on site.

Some of you may remember a couple of posts in the last 18 months
or so, first in March 2011, here and then my follow up earlier this
year, here. 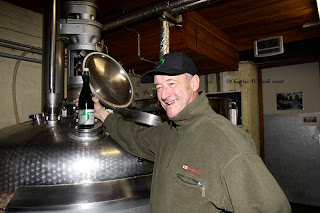 
While Armand Debelder's father, Gaston Debelder, started
blending lambics in the 1950's, it was not until 1999 that there was
actually a brewery on site. Armand started brewing lambic then,
and continued for ten years. "We did not own the first brewery that
was here. It was leased, and the owner took it back in 2009,"
Armand told me during a February 2011 visit. 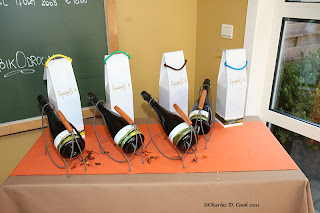 (Photo, above: sales of Armand 4 Oude Geuze
provided enough money to open another brewery
on site at 3 Fonteinen. This superb beer is
now almost sold out.)


He added: "For a time, I thought I would never brew here again,
as brewing is hard work, and I have a few health problems. But,
once I hired Michael Blancquaert, who is now the co-manager
of the brewery and blendery, I began to think of it again.
Sales of the Armand 4, which was a blend of the last three
lambics brewed on site here, has provided us with enough money
to be able to afford to add a 4,000 liter (40 hectoliter, or about 34
U.S. barrels) brewhouse. Michael will handle the manual labor,
and I will teach him as much as I can about lambic brewing and
blending. And, of course, my wife, Lydie Hulpai, will handle
things like marketing and sales." 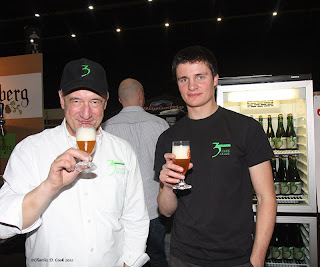 (Photo, above: Armand Debelder, left, and Michael
Blancquaert, at ZBF 2012.)

Once the weather cools off a bit, Armand and Michael will put
the new brewhouse into action.

In order to make room for the new brewery, the shop had to be
moved to where the LambicODroom cafe was. So, that cafe was
sadly closed, after as four-year run. The good news is the superb
Restaurant 3 Fonteinen remains open, and is a great place to drink
and eat. 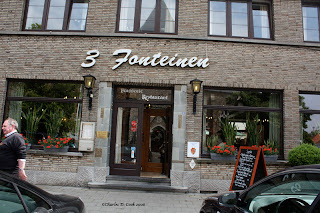 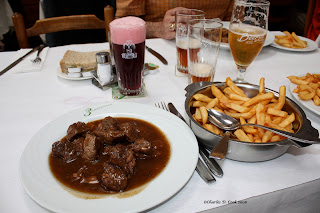 (Photos, above: Restaurant 3 Fonteinen, and an
excellent meal there.)


The hours for the open door days are 10 am to 5 pm. Tours of
the brewery and blendery will be offered in Dutch, English and
French. As an added bonus, each attendee will be given an
admission ticket to De Lambiek, the excellent lambic beer visitor's
center in Alsemberg.

Also, there is an announcement on the 3 Fonteinen website that
old bottles of Oude Geuze and Oude Kriek-not normally sold in
the cafe or restaurant-will be offered for sale on this special weekend.
It sounds like a really good weekend to be in Beersel.

Great stuff! looks like I'm heading there a few weeks too late for the vintage sale.

Thanks for sharing this great news!

I ran into Armand and Michael at the Sour & Bitter festival in Copenhagen last May and could see that he was a transformed man from only a year earlier. He looked so happy and at ease, telling everyone about the new brewery. I also think it helped that in Michael he has found an excellent heir, someone who will keep 3 Fonteinen going for many more years.

Cheers to the future of 3 Fonteinen!