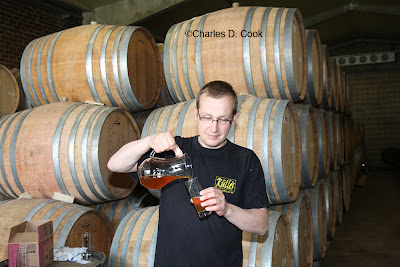 (Photo, above: Pierre Tilquin pouring a sample of
lambic in the blendery.)

This Saturday and Sunday, May 28-29, Belgium's first new
lambic blendery in nearly 15 years will open its doors to the public
for the first time, from 10 am-6 pm. Yes, sour beer lovers,
Gueuzerie Tilquin has arrived, and is ready to show off its
brews.
The mastermind and driving force behind the project is
Pierre Tilqiun, 37, who was educated as a bioengineer.
Tilquin holds a Ph.D. in statistics and genetics. 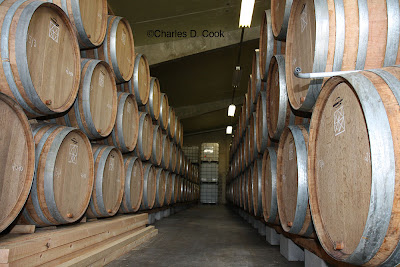 The following Friday, June 3, will be the official debut of Oude
Gueuze Tilquin a l'Ancienne, in 37.5 and 75 cl bottles and on draft.
The event will happen at both locations of Moeder Lambic in
Brussels, as well as Delirium Taphouse, starting at 4 pm (16.00)
local time. Delirium Cafe, the bar with 2,000 beers located below
the Taphouse, will have bottles on offer beginning at 10 am for
those who are too thirsty to wait till late afternoon, and Pierre
will be at on hand at the Taphouse at 10 PM (22.00) to present his
Oude Gueuze and answer questions.

I really wish I was in Belgium next weekend . And this one too. 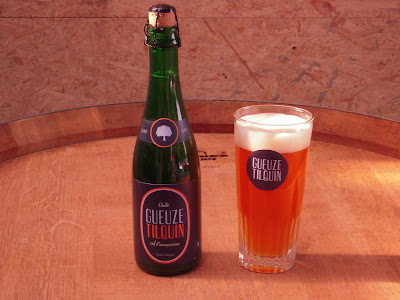 Tom Peters of Monk's cafe in Belgium plans to join the fun,
albeit a continent away. Peters says he will offer a sneak
preview with a very limited number of bottles of the Oude
Gueuze at Monk's. He will crack the first bottle at
12:01 PM that same day, which is also opening day of
Philly Beer Week 2011. 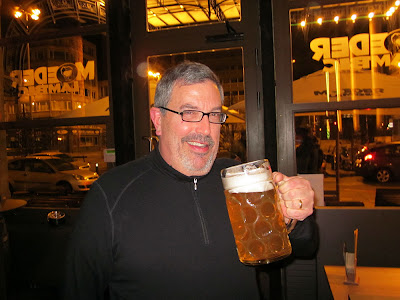 (Photo, above: Tom Peters likes his lambic in large
quantities, as shown in this photo at Moeder Lambic
Fontainas in March.)
I imagine Monk's might get a bit busy that day.
If I was in Belgium, I know where I would be!

Also, this weekend is the Weekend of Spontaneous
Fermentation in Buggenhout, arguably Belgium's top
lambic beer fest. I attended in 2008 and 2010, and look
forward to getting back in the future. 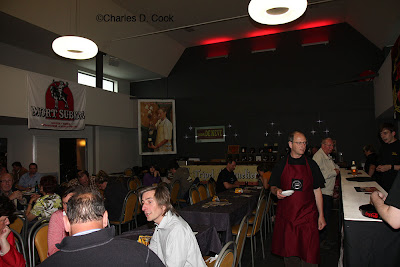 (Photo, above: inside the hall at the Weekend of
Spontaneous Fermentation Beer festival.) 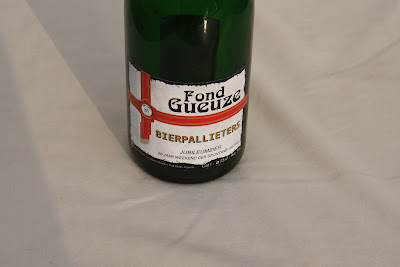 This is the 20th Anniversary of the event. The beer
appreciation club that organizes the fest,
De Opstalse Bierpallieters, asked Brouwerij Girardin
to produce a special Oude Gueuze for them, and indeed
they did. 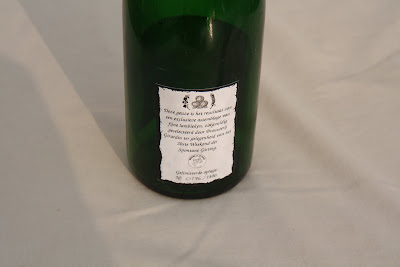 I'm fortunate to have tasted one a couple of weeks
ago, and it was very good. Only 1400 bottles were filled.
It will debut and be available at the event.
See: Weekend

I visited Gueuzerie Tilquin on May 29, 2010.
Here's an article that first appeared in Celebrator Beer News
last August:

Belgium has a new gueuze blendery, and it’s in Wallonia.

Lambic and gueuze beers, those produced in the Payottenland, an area to the south and west of Brussels, have been gaining in popularity and respect for a number of years now. Making traditional lambic brews, created by spontaneous fermentation and aged in oak barrels, is a tough business, requiring lots of initial investment and patience, as the production process can take years. Lambics of various ages are blended to make gueuze. 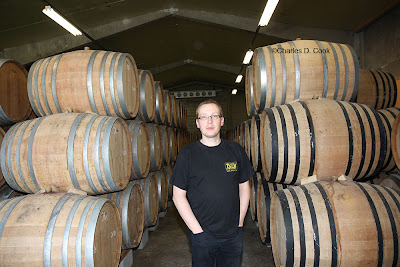 (Photo, above: Pierre Tilquin in his blendery.)

Fortunately for the sour beer lovers of the world, there are young Belgian beer lovers dedicated to the survival and promotion of such brews. Pierre Tilquin is one of them. He and a small group of investors have started the first new gueuze blendery in “The Beer Country” since Geuzestekerij De Cam opened in 1997.
Gueuzerie Tilquin is also the only lambic blendery in Wallonia. However, Flanders is barely a couple of football fields away. 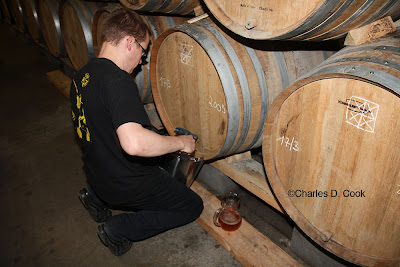 “We opened in March 2009,” Pierre told me during my visit to the blendery on May 29th. “We have 222 barrels, all in the 400 liter size, and all are full now,” he added. “So that’s 888 hectos of lambic on barrel.”
Opening a new blendery is a very big deal, as the initial investment in time and money is huge, with little financial return until the first bottle of Oude Gueuze is sold, years later. To take on such a venture requires someone with a lot of vision, patience and determination. 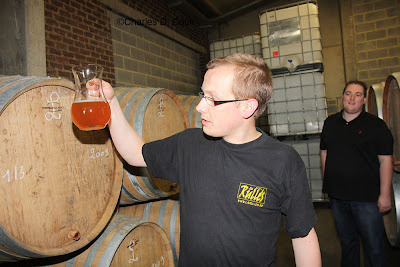 “I worked at with Armand (Debelder) at 3 Fonteinen for six months, and at Cantillon for six months as well,” Pierre told me. “I learned a lot from these two great blenders, and got different perspectives from each. It was very valuable experience. My idea is to take the best of both worlds,” he added.

He continued: “As I live in Brussels, I did want to open a blendery there. But rents are very high, and it was impossible to find a suitable space at a reasonable price. Here in Bierghes-Rebecq, we are only about 15 minutes driving from Lembeek, where Brouwerij Boon is, and Flanders is about 200 meters away.” 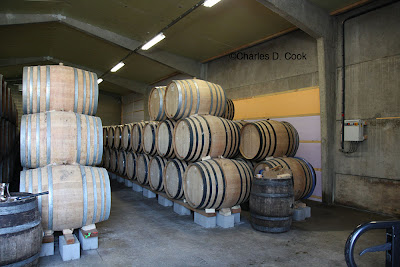 Pierre also mentioned the government helps businesses such as his in Wallonia, whereas such subsidies are rarely seen in Flanders. Adding to that, he said “We have a great deal of time and money already invested here. All the barrels are from French wineries; 150 of them, with the silver bands, come from the St. Emilion and Medoc regions, and cost us 70 Euros each. The other 72, with the black bands, come from the Hermitage region, and we paid 60 Euros each for them.” Pierre added that he cleaned the barrels with hot water until no color remained in them.

“I have backing and help from Gregory Verhelst of Brasserie La Rulles, and other investors. We have a complete business plan. I will work at the blendery full time, and we may have another person working part time as well in the future,” Pierre commented. 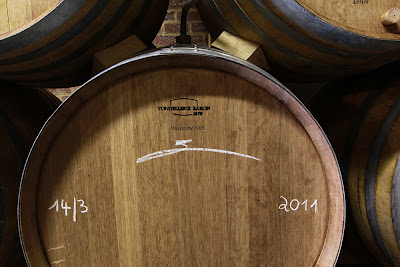 “Of course you know all lambic producers have their own symbol, which you can see painted on their barrels. I’m still working on mine, as well as a website,” Pierre remarked.

When will the sour beer lovers of the world be able to taste that first Gueuzerie Tilquin beer, you ask? “We will release our first gueuze, which will likely be called Oude Gueuze Tilquin à l'Ancienne, in May or June, 2011. It will be a blend of one and two year-old lambics,” Pierre told me. “I’d like to wait till 2012 and do a 1, 2, and 3 year old Oude Gueuze, but we need some return on our investment, and cannot wait until then. In 2012, we will have a three year old lambic in the blend,” he added. 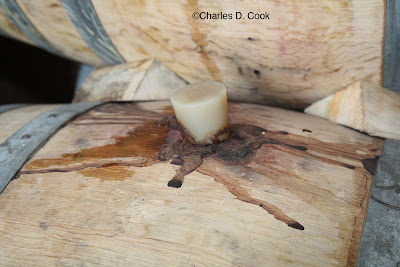 “My plan is to sell 500 hl of blended lambics and Oude Gueuze per year. For that you need about 900 hl of barrel capacity, which we have. We buy wort from Boon, Cantillon, Girardin, and Lindemans, and put them in our barrels here. But I won’t sell any straight, unblended lambic; there’s no reason to when you could buy that right from the breweries. I’ll sell only some blended lambics on draft at special places like Moeder Lambic and Delirium Cafe in Brussels, and of course 37.5 cl and 75 cl corked bottles of Oude Gueuze. I even have some ideas for fruit beers for the future, but it won’t be Kriek or Framboise, as these are already common. I want to do something different.”

Pierre continued: “As to Cantillon lambic, I will only use it in my blends as a three year-old. In fact, I’m the first and only gueuze blender that Cantillon will sell their wort to. I’ll probably use Boon as a one year-old, and Girardin and Lindemans as one, two, or three year old lambics.” 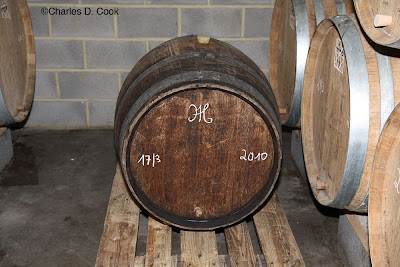 Ah, and the taste, you ask. We first sampled an interesting “March” beer from Boon which was just a few months old. It was an interesting brew; a lightly sour beer of 8 degrees plato and about 3% abv that Pierre told me he would used to lower the alcohol in his Oude Gueuze. “My goal is a gueuze of about 5 to 6% abv. I don’t want it to be higher than that. This March beer is what the farm workers would have drunk in the fields years ago. Refreshing, but not too alcoholic,” Pierre said.

Moving up the ladder a bit, we then tasted a 14 month old lambic from Lindemans that was very nice. It was getting its funk on, and was already a very pleasing, tart beer. We then tasted a Boon of the same age, which was equally as good. Having tasted lambics right from the barrels at all the lambic breweries and blenderies in the Payottenland (except the Inbev plant) I was very impressed. 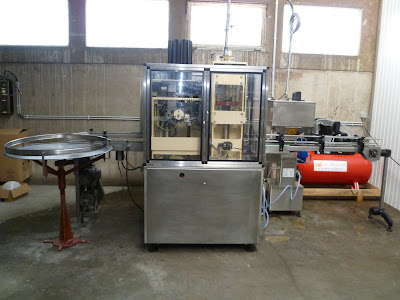 Pierre told me that the temperature inside the blendery is controlled so that it won’t go higher than 19 C (66 F) in summer. He added, “What you see here is only the beginning. I still have to build a warm room for conditioning the beers, and also a room for the bottling machine.”

I can’t wait till next summer arrives and the first Gueuzerie Tilquin Oude Gueuze is ready to drink! I think a lot of beer lovers are likely to feel the same. Sante, Pierre, and see you next year. (end of last year's article.)
Note that the bottling line has been installed, obviously. 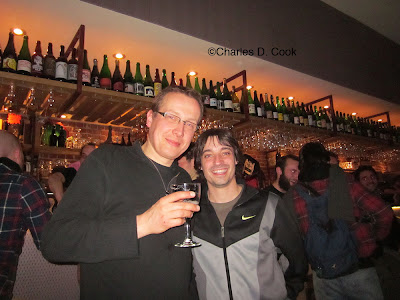 (Photo, above: Pierre Tilquin and Brian Ewing,
at Moeder Lambic Fontainas in March.

Brian Ewing and 12 Percent Imports will import Oude
Gueuze Tilquin a l'Ancienne to the U.S.A.

Fantastic, thanks for the great lambic news.

Jeff
WHERE THE WILD BEERS ARE

Great post, thanks for the heads up on the new lambic blendery!

Damn and blast! I was at Moeder Lambic the day before. Never mind I'll be back next year.
By the way do you know whats happening to Drie Fonteinen?
Click here for Bazza’s Blog ‘To Discover Ice’