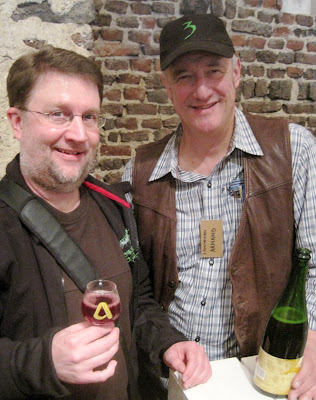 Hello Belgian beer lovers!
Here's an offer that should be an attractive one for
a web developer that also happens to love Oude Geuze.
I've been writing this blog for over three years-since
February 8, 2008-to be exact. Judging by the demographics
of the people reading it, it has been enjoyed by beer lovers all
over Europe, North and South America, Asia, Australia and
beyond. I know that because I have Statcounter.
I'd like to take the on-line appreciation and promotion
of Belgian beer to a new level. Having visited 80% of Belgium's
breweries and over 300 of its beer cafes, I think I have the
content to do that. With 15,000 photographs and 200 hours
of audiotaped interviews from The Beer Country, I'm sure of it.
What I need is a multi-functional website where I can offer
several levels of content and also ads.
What can I offer a web developer? 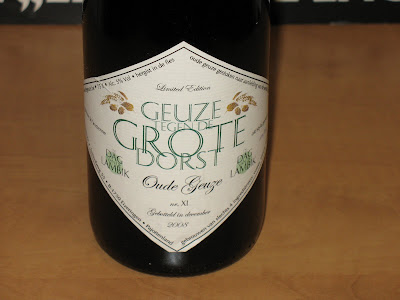 How about one of the world's rarest Oude Geuzes? 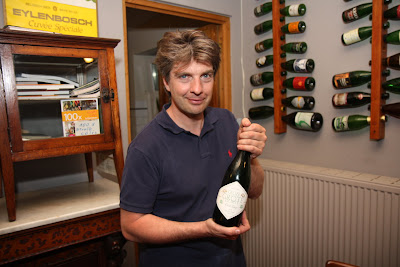 (Photo, above: Yves Panneels, of the lambic cafe
In de Verzekering Tegen de Grote Dorst. He's
holding a bottle of the Oude Geuze he bottled
in December, 2008.)
Only twenty-four 75 cl bottles and 15 Magnums were bottled,
in December 2008. I have it on good authority that a certain
bar owner in New England was offered $600 for a bottle...and
turned it down. Mine is a 75 cl, bottle number 11.
I wrote about it, with many photos and which lambics were
used in the blend, here .
I would prefer to work with someone in the D.C.-Baltimore-
Philly-NYC I-95 beer corridor, but will consider all ideas/offers
of help. If I do not receive an offer that I like, then I won't trade
this beer for services. I'd love to drink it, of course.
It's been in a 55 degree fridge since June of last year, when
Yves gave me the bottle. It was in his cellar before that.
Post a message or send me an email or Facebook message to
contact me.
If I don't respond immediately its because summer is a busy time
and I've for lots going on.
Cheers,
Chuck
Posted by Chuck Cook at 6:26 AM