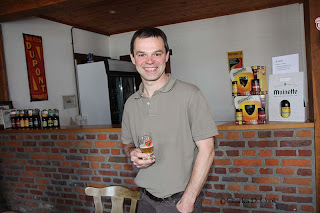 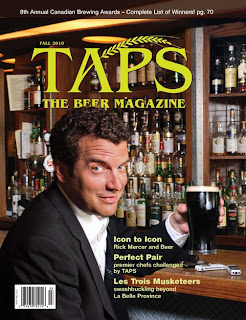 I have a 500+ word article on Brasserie Dupont, one of the world's
great breweries, in the Autumn issue of Taps: The Beer Magazine
(formerly Taps: Canada's beer magazine.)

This is my third Belgian article for Taps. I previously wrote about
Ghent's beery treasures as well as about lambic in the magazine.

I'm happy to say that with this issue, Taps is now available in the
USA at many Barnes and Noble and Borders bookstores...so head out
and pick up a copy! 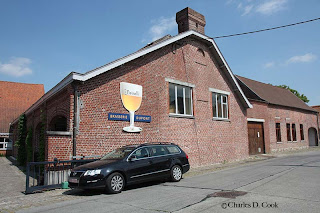 Photo, above: Brasserie Dupont. You can see the boiling kettle
inside the window nearest the car. 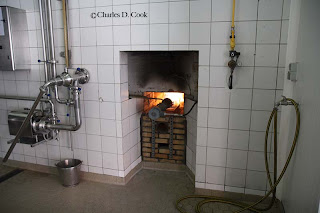 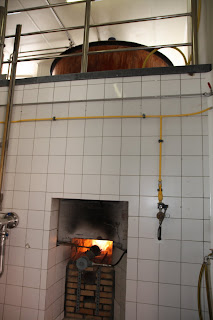 Photos, above: the copper boiling kettle at Dupont is
heated by direct fire.

There's some exciting things going on at Dupont, as I discovered
during my 3 1/2 tour of the brewery on June 2nd. My host was
Brewmaster/Director Olivier Dedeycker, who's grandfather was
also brewmaster. 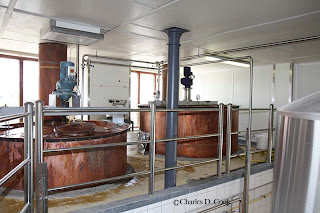 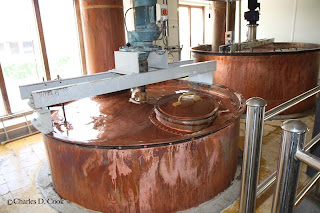 Photos, above: the copper kettles at Brasserie Dupont,
dating to around 1920. The one in the background is the
boiling kettle. 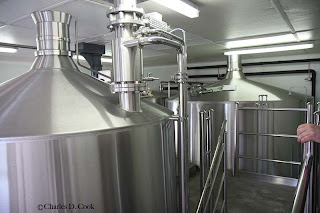 Photo, above: the new Italian brewhouse at Dupont,
built of stainless steel. It was installed in 2008.
Dupont mashes in here, then boils in the copper kettle. 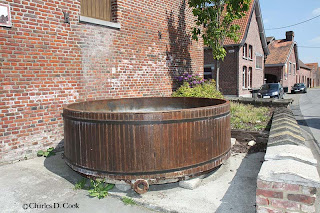 Photo, above: the old mash tun at Dupont. It was used
from 1844 to 2008. The brewery is keeping it as a
museum piece, which I think is a nice touch. 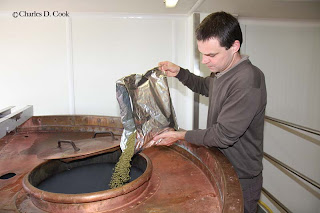 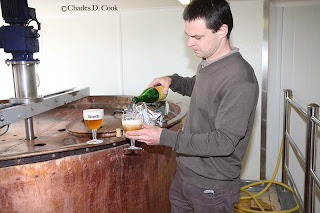 Photo, above: Olivier pouring chalices of Moinette on
top of the copper boiling kettle.
(Touring Belgium's great breweries and tasting their
excellent beers is a tough job, but I manage to
struggle through it, one beer at a time.) 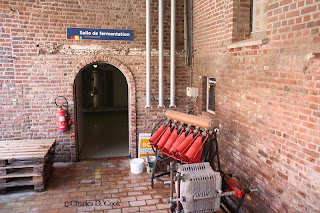 Photo, above: the entrance to the fermentation hall
at Dupont. 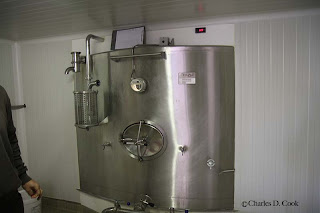 Photo, above: a fermenter at Dupont. All of are
of the short, squat variety, as the brewery feels this produces
a more complex beer than tall, conical fermenters. 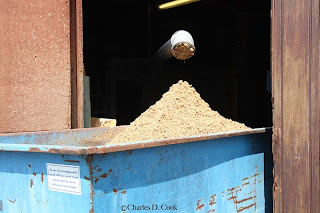 Photo, above: spent grain being pumped out of
the brewhouse. 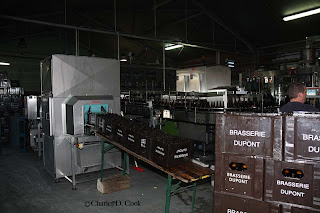 The bottling line at Dupont. 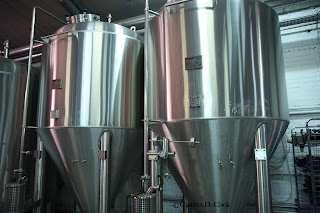 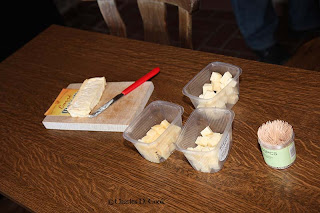 Photo, above: a variety of Dupont cheeses made for a
fine tasting, paired with several Dupont beers. 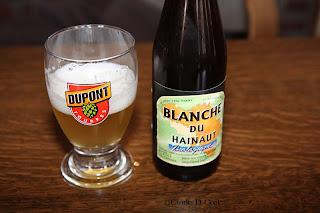 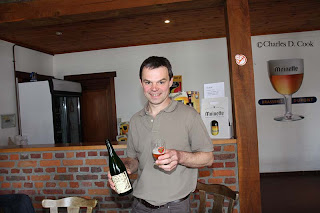 Photo, above: Olivier with the superb Cervesia, a beer
brewed with very little hops and mostly herbs and
spices. A modern-day Belgian Gruit ale. Don Feinberg of
Vanberg and Dewulf Importers tells me a small quantity of
this brew will be imported to the USA next year. 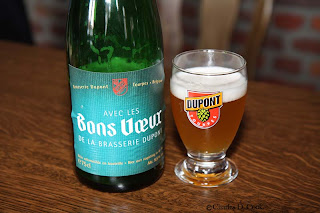 Photo, above: Avec les Bons Voeux de la
Brasserie Dupont. I leave you with this world-class
beer as the holidays are nearly upon us!

Cheers, and I hope you enjoyed this short look
at Brasserie Dupont, producer of benchmark ales
like Saison Dupont and Moinette. These beers are
imported into the U.S. by Vanberg and Dewulf.
See their site for more info, as well as the brewery website.
Posted by Chuck Cook at 6:51 PM

Very solid read. The Beer Magazine is a great idea

Hello ...
My name is Ricardo, aui I live in Brazil and I really enjoyed of your posts, I'm adding your blog to my reading list ..
Pass on my blog and leave a comment, craft beer is growing in Brazil for a look of my blog .... link below ...
Ein Prosit !!!