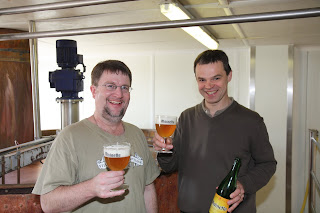 Me with brewmaster/Director Olivier Dedeycker, in the brewhouse
at the superb Brasserie Dupont in Tourpes: one of the world's
greatest breweries. 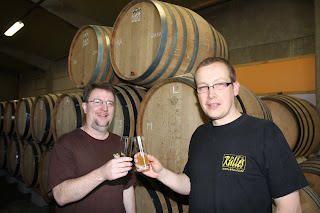 Photo: me and Pierre Tilquin of Gueuzerie Tilquin

I just got back Monday afternoon from my 21st trip to Belgium and 25th to Europe overall.

Maybe that will explain the over three week lapse in postings here. Yeah, excuses, excuses. 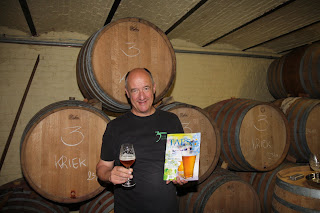 Photo: Armand Debelder of 3 Fonteinen with a copy of the Canadian
Beer magazine, Taps. There are 2 photos of Armand in my article on
lambic beer in this Spring issue.
It was another superb trip, I'm happy to say.
Highlights were visiting all the barrel rooms at Girardin, within an hour and a half of the jetliner touching down in Brussels, and tasting Frambooslambik and two other straight lambics right from the fermenters and barrels; visiting the new lambic blendery in Wallonia, Gueuzerie Tilquin; my first meal at De Bistronoom in Ostende; return visits at 3 Fonteinen, Dupont, Liefmans, Rodenbach and De Ryck; the Weekend of Spontaneous Fermentation Beer Fest; the Day of the Kriek at In de Verzekering tegen de Grote Dorst; visiting several new small breweries; and soaking up the atmosphere sitting outside at numerous cafes in perfectly sunny 75 to 85 degree weather for more than half the trip.