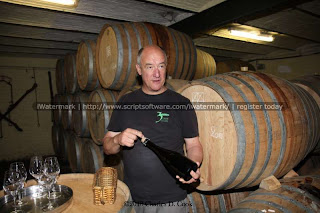 
There’s been a lot of conjecture about the future of the hallowed Drie Fonteinen (“Three Fountains”) geuze blendery in the last year or so. After “The Catastrophe” of May 16, 2009, when about 100,000 or so bottles of Oude Geuze, Oude Kriek and other lambics-nearly an entire seasons’ worth of production-was overheated due to a thermostat failure, things looked bleak.

The creation of “Armand’s Spirit” (called an "Eau de Vie van Oude Geuze" on its label, it is sort of bier schnapps/liquor of 40% abv) produced from distilling the unusable lambics, has provided a new revenue source for brewer/blender Armand Debelder. The profit margin is higher and the process of distilling is much less labor intensive than brewing, Armand, 58, told me during my visit to 3 Fonteinen on May 28th.

More than half the 6,000 bottles (500 ml size) had already been sold as of several months ago. There is definitely an interesting, subtle, geuze-like quality to the spirit, which is well worth seeking out if you just happen to be in Belgium.

(or, if you have a friend, relative, co-worker, or mere acquaintance, maybe you can convince them to bring you a bottle, while they last. Tell them I said so.)

“I also lost my brewery in 2009” Armand remarked as we talked in the lambic barrel room. “And the cost of the new brewery was the cost of what was lost in the catastrophe. So I won’t brew again here, for those reasons. But I do have some good news for lambic beer lovers” he stated.

I was eagerly anticipating his next comments, after that statement!

Happily, I was not disappointed.

“I had a stock of 13,000 liters of lambic brewed here in 2007, 2008 and 2009” Armand said. “So we have just produced a final, Drie Fonteinen-only Oude Geuze with these lambics. We are going to make this last-ever brewed on site beer one to remember!” he commented. 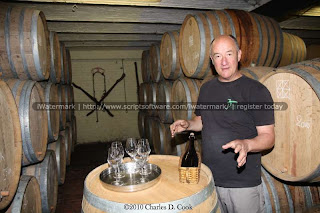 “I had a really exceptional 3 year old lambic, which your friends Brian (Stillwater) and Gunther (Bensch) tasted back in March” he continued. “It’s now been blended with my last 1 and 2 year old lambics, to make this Oude Geuze” he remarked.

Continuing, he exclaimed: “and now, Chuck” we are going to taste it!”

OK, twist my arm. Duty calls. Anything for Beer Research!

“As you can see, we are not using the typical lambic bottle for this one. This is because this beer will be one of a kind, the last Oude Geuze brewed here; the final single 3 Fonteinen blend. The bottle we are using is the Asti Spumante champagne type, which costs two and half times what a normal champagne bottle does. This product must have fine presentation, great taste and be unique.” 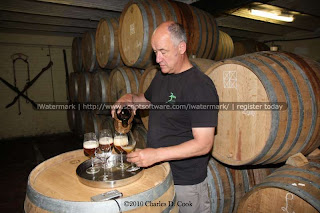 Armand continued “My wife Lydie worked in the marketing department of an American company for a number of years, and learned the value of presentation and marketing. I never cared about presentation in the past. She has taught me a lot about how to present my products.”

“Of course I used aged Challenger hops in this brew, as I usually do. These hops are not very much used in the lambic world, but I really like them. This Oude Geuze, which we have yet to name, is not filtered and no finings were used in it. It was just blended and then bottled” Armand stated.

He continued: “You are the first American to taste this beer, as it’s still young, and a bit soft. It was just bottled in March. But I think it will be a good one. We have not decided when it will be released for sale as yet. It won’t be offered until I feel it is fully mature and ready.” 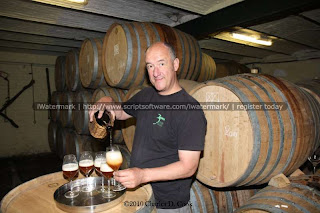 For a good, long while.

I found the beer to be a very enjoyable Oude Geuze, with great potential.

Only time will tell.

Armand will continue to buy wort from Boon, Girardin and Lindemans and place them in his own barrels for aging and later blending to produce Oude Geuze, Oude Kriek, and possibly other blends, as in the past. Plans to open a distillery on site are still being considered. 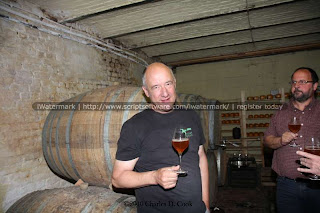 Hi Chuck, great reporting! I always wondered if Mr. Debelder had given a first-hand account of what happened that day, his emotions, thought process and decision making afterwards etc...Have you or anybody else ever conducted an interview w/ him specifically on that day? Apparently there is some video of Mr. Debelder speaking to this subject at the lambic summit but it was pretty inaudible.