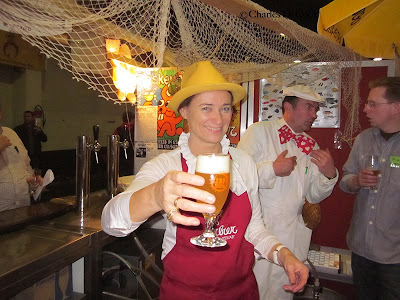 (Photo, above: Els de Mûelenaere, wife of Kris Herteleer
of De Dolle Brouwers, with a "Verse Vis" at the 2011 ZBF.)


The end of an era is at hand, and the beginning of
another is just over a year away.

The Zythos Bier Festival (ZBF) which is the closest thing
that Belgium has to a "national" beer fest, has seen its last
show in St. Niklaas, an East Flanders city located between
Antwerp and Ghent. 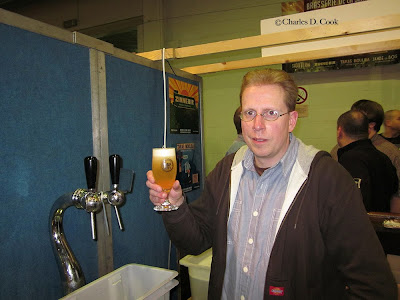 (Photo, above: Yvan de Baets of Brasserie de la Senne
at ZBF 2011, with a glass of Taras Boulba.) 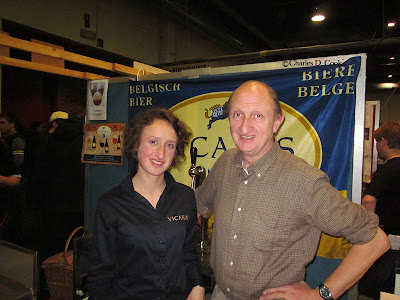 (Photo, above: Ann-Catherine Dilewyns and her father,
Vincent of Brouwerij Dilewyns. They are opening a new
brewery in May, and their beers will be headed to the
USA later this year.)

My good friend Carl Kins (who is a well-respected member
of the H.O.P. club in Kortrijk, a Zythos affiliated club that
organizes the Karakterbier fest in Vichte every year) told me
the following this morning: 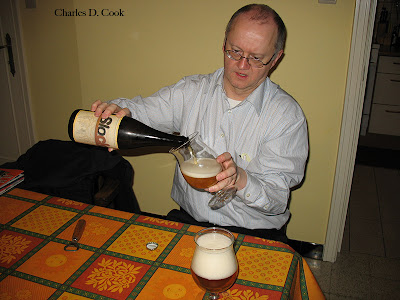 "The Stadfeestzaal of St-Niklaas, or City Festival Hall, is being
torn down in the next few weeks. So, another venue had to be
found for the ZBF." 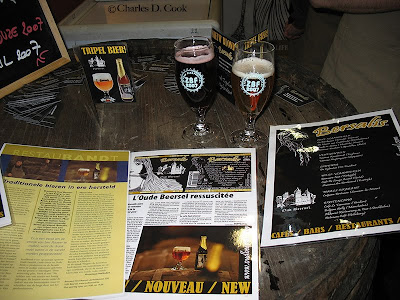 The new location will be the Brabanthal ("Brabant Hall")
located 4 km from the center of the historic city of
Leuven in Flemish Brabant. Carl added:

"The Brabanthal is more than double the size of the St Niklaas-hall,
allowing expansion, i.e. every brewer willing to participate will be
able to. And, contrary to this year, no people will need to be queuing
(waiting) on the outside any longer."

The fest will be held on the last full weekend of April every year for
the next five years, at least. So it is April 28-29 for 2012. See
Brabanthal

This new location and new date leads to a number of possibilities.
The Toer de Geuze, an open house at nine of Belgium's lambic
producers, is organized every other (odd-numbered) year,
on the same weekend. So, in 2013, once could do the ZBF on
Saturday April 27, and the Tour de Geuze on Sunday April 28th.
That, friends, would be a great weekend!

Additionally, Leuven has far more beery delights than St-Niklaas.
In fact, it's not even close. St-Niklaas has little in the way of
Belgian specialty cafes and no breweries, and Leuven has many.

If it's one I know for sure, it is that my good friends in the
De Leuvense Biertherapeuten (LBT) which is one of the
very active and highly thought of Zythos-affiliated beer appreciation
clubs in the country, will put on a show. 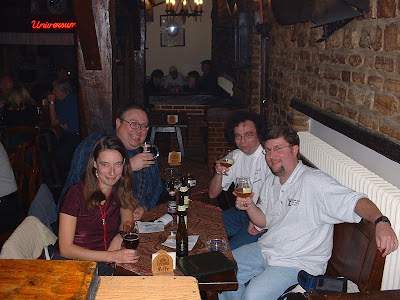 (Photo, above: three of the board of the LBT, who will
likely play a major part in ZBF Leuven: from top left,
Steven Vermoere; Ann Frankie, lower left; Luc Smekens,
top right; and yours truly, bottom right.
Photo taken at Cafe Universum in 2003.)

Luc Smekens and Steven Vermoere are on the board of the LBT
and have been working each ZBF since the first in 2004. I first met
them when they were working at the old 24 Hours of Belgian Special
Beer in 1997 in Antwerp. At that point, I wasn't even a beer writer
yet.

I had brought with me a number of special American brews to share,
and hence made some new friends. Got that? If you want to make
some friends in Belgium, bring some great local beers to share! 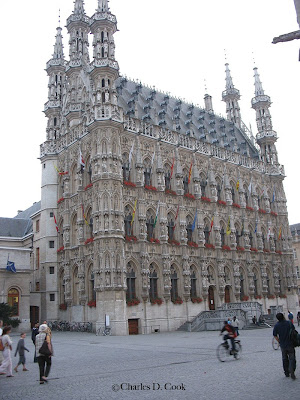 Luc and Steven took me on a couple of epic pub crawls of Leuven
in the past, so I know that cafes like Blauwe Kater, Vliegend
Varken and Taverne Still Waters will see crowds of thirsty beer
lovers next April. 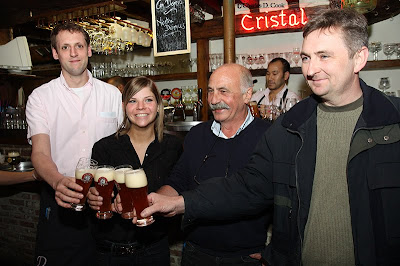 (Photo, above: brewer Marc Knops (far right) and
several other staff of Huisbrouwerij Domus in
Leuven celebrate the release of a new beer in 2009.)

No doubt the Domus brewpub/cafe will as well, as Marc Knops
(who also brews at Achel, the Trappist Abbey and brewery in
Limburg) has been cranking out some very nice beers there the
last few years. I visited in April, 2009. Domus also has good,
reasonably priced food as well as a number of other Belgian
beers. Get there. 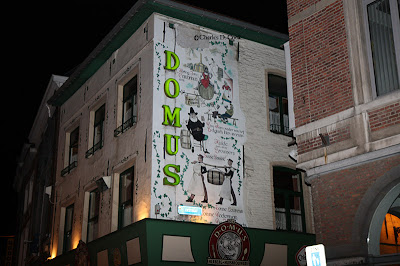 (Photo, above: Huisbrouwerij Domus in Leuven.)

Leuven is also very easy to get to from Brussels or Mechelen. While I
might opt to stay in this beautiful medieval city of 35,000+ students,
you could as easily stay the night in the E.U. capital or the home of
Brouwerij Het Anker, Mechelen. Both are about 20 minutes by direct
trains. 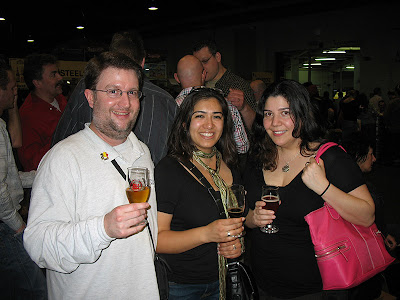 (Photo, above: me at the 2007 ZBF with a couple of
beer lovers from California. Yes, I realize the tasting
glass I am holding says 2004, however old glasses are
always still in use at ZBF alongside glasses from the
present year.) 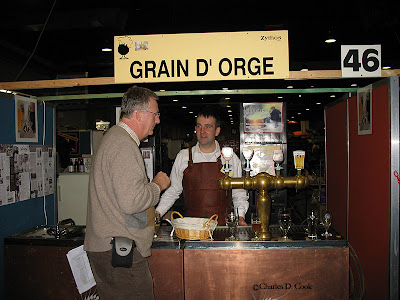 (Photo, above: Beer writer Tim Webb talking to brewer
Benoît Johnen of Brasserie Grain d' Orge at the 2007 ZBF.
I visited the Liege province brewery for a second time,
at their new location, earlier this month.)

I look forward as much to visiting Belgium and Leuven in the Spring,
with its warmer weather, historic sites and beery culture.

I also attended the forerunner of the ZBF, The Objectieve
Bierproevers (OBP) "De 24 Uur van Het Belgisch Speciaal Bier"
fest some five times. The first three times I went were at
Antwerp's Stadfeestzal, which burned down in December, 2000.
The final two 24 Hours beer fests were put on at Antwerp's
Oude Beurs, the former commodities exchange.

When the OBP closed up as a legal organization after the 2002 event,
the ZBF was formed, and took up its role as Belgium's premier beer
promotion and protection organization. It has done superbly well,
and should continue to do so, under the direction of current
president Jan Rumes and the Zythos staff.
See ZBF 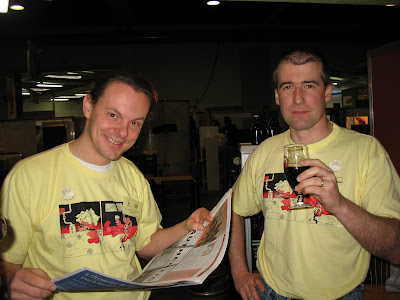 (Photo, above: Glenn Castelein and Davy Spiessens at the
2007 ZBF.)

How this will affect the Alvinne Craft Beer Festival (ACBF) is unclear
at the moment. Whether Davy, Glenn and Marc will follow suit and
change their fest to the same weekend as ZBF or stay in March is
something they will have to ponder over, and they are incredibly
busy building a new brewery.

(UPDATE: as you can read in the comment below, Glenn
confirms ACBF will remain in March, on Saturday
March 3 and Sunday March 4. So one could do the
Nacht van de Grote Dorst (Night of the Great Thirst)
at In de Verzekering tegen de Grote Dorst on Friday
March 2, then ACBF the Saturday and Sunday.
Soooo many tough choices for the beer lover.)

Better start looking for a spare beer-processing
organ now...just in case.
Posted by Chuck Cook at 9:04 AM

ACBF will be on saturday March 3th and sunday March 4th