This article originally appeared in the June/July issue of Ale Street News. 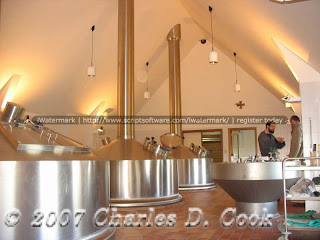 The St. Bernardus-Westvleteren story has been the subject of much discussion over the years, even more so recently, as the popularity of both breweries has increased exponentially.

I have visited the brewery at St. Bernardus twice, and have made four visits to Brouwerij Westvleteren/De Sint-Sixtusabdij van Westvleteren. My latest was in December 2009, when I toured the new and old breweries with Br. Joris, the monk in charge of the brewery.

Hence, I think I can shed some light on this interesting subject.

While I'm at it, I'm also going to show you some photos from inside the
breweries at Westvleteren and St. Bernardus. 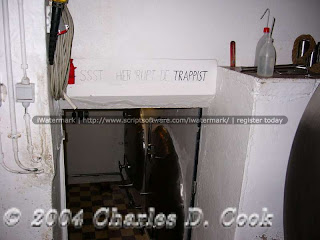 Photo, above: entrance to secondary fermentation cellar. Above the
entrance it says: "Shhh....Here ripens the Trappist" 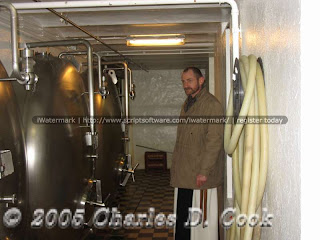 Photo, above: Brother Joris in the secondary fermentation cellar.

Brouwerij St. Bernardus opened in 1946 with an arrangement to brew beers under license for the nearby St. Sixtus Abdij (Westvleteren) for commercial sale.

The years immediately after the Second World War were a difficult time for the monks of St. Sixtus, as the brewery and abbey needed major renovations after years of German occupation. The roads around the abbey were also in very bad shape. 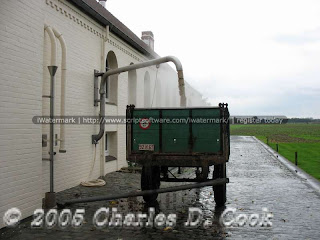 Photo, above: spent grain being pumped out of the brewhouse at
Westvleteren.

Hence, the monks needed money for the renovations, and also to sustain themselves. They decided to make an agreement with Evarist Deconinck, who ran a cheese makery located not far away, among farmland a couple of miles outside the picturesque village of Watou. Ironically, this same cheese makery had been founded and run by the Trappist monks of the Mont de Cats monastery in nearby France, who had fled their country in a time of turmoil. The monks called the farm “Refuge de Notre Dame de St.Bernard,” and their primary source of income came from sales of their Abbey cheese. When these monks went back to France, Deconinck took over the farm and cheese makery. Later, the Claus family took over from him. The brewery name, St. Bernardus, comes from the monk’s name for the farm.

The original St. Sixtus Abbot 12 (Abt for short) had already been changed from its original formulation when this occurred. Until sometime in the 1930’s, the Abt really did have 12% abv. However, it was very difficult to brew, as the high alcohols often killed the yeast. Additionally, the monks did not have the high-tech labs of today, so it wasn’t easy to brew high alcohol beers back then. Hence, the beer was reformulated a bit to reduce the alcohol to 11% abv, which still packed a mighty punch. 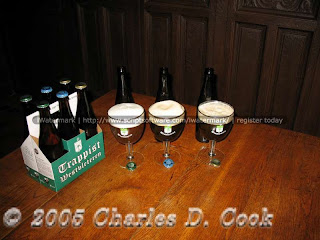 Photo, above: the three beers of Westvleteren: Blond, 8, and 12.

The first three beers of St. Bernardus-namely, Pater 6, Prior 8, and Abt 12-were pattered after the similarly-named, dark, malty, strong brews of St. Sixtus. To achieve this, the brewmaster from the abbey joined St. Bernardus and brought along all the recipes, the yeast, the equipment and the brewing knowledge. 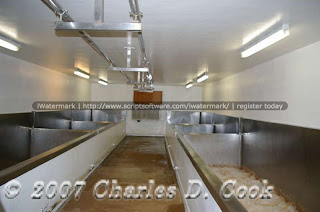 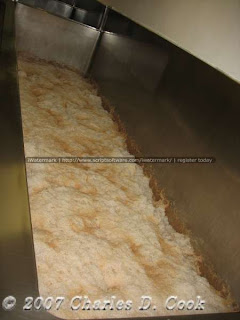 Photo, above: close up of one open fermenter in action at Westvleteren.

Note that the beers of Abdij St-Sixtus have been referred to strictly as “Trappist Westvleteren” by the monks for the last decade or so. These beers have no labels today, but such was not always the case. Many bottles did, in fact, have colorful labels until sometime in the 1950’s. 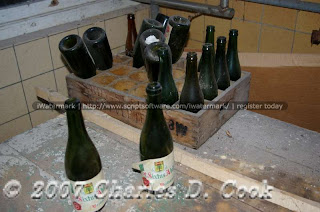 Photo, above: old Westvleteren bottles from the 1950's or 1960's. Taken
inside the old brewery at Westvleteren.

You can still find bottles of beer brewed at St. Bernardus with the words “Trappist” and “Westvleteren” and “St. Sixtus” printed on them, at places that carry aged beers, like Bierhuis Kulminator in Antwerp. 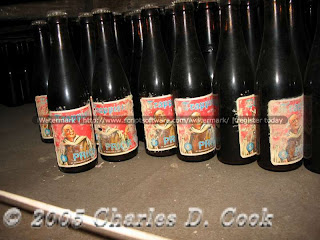 These are bottles of Prior 8 brewed at St. Bernardus in the 1970's.
Note the word "Trappist"on the labels.

In the beginning of the 1960’s, the son-in-law of Evarist Deconinck, Guy Claus, took over the brewery. Negotiations then began with the monks of St-Sixtus to renew the license. This process was completed in 1962, when St. Bernardus was again granted a license to brew beer for Westvleteren, for a period of 30 years.

In 1992, this arrangement came to an end, and the monks of St. Sixtus decided not to renew the license. The Trappist Abbeys had decided that the term ‘Trappistenbier’ could only be applied to beers brewed inside the walls of the Trappist Monastery, under the control of monks.

This allowed the monks of St. Sixtus to increase production a bit, as they had opened a new, larger capacity brewery in May, 1990. However, to this day they still produce no more than 4,750 hl (about 4,000 US barrels) per year.

St. Bernardus then entered the marketplace on its own. It has been a great success. 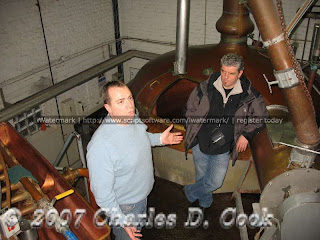 Brouwerij St. Bernardus cuts no corners in the production of its beers. To make very complex, flavorful strong ales takes time. The Abt 12 has an overall production period of over 3 months, from primary fermentation to maturity. This includes 2 months of cold conditioning and a further 2 weeks of warm-conditioning. 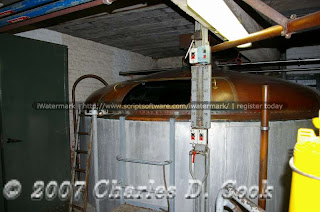 Photo, above: the mash tun at Brouwerij St. Bernardus

All the St. Bernardus beers are unfiltered, unpasteurized and bottle-conditioned. All are offered in 33cl and 75cl bottles, and kegs of various sizes. The Abt 12 is also now available in 6 liter (Methuselah) bottles. That would make for a very big tasting, my friends! 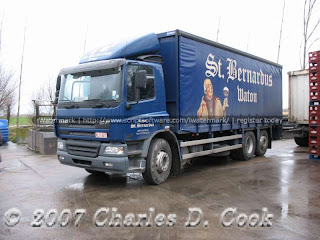 This is a sight I'd like to see pulling up to my front door!

Ironically, it is the brews of St. Bernardus that still use the original Westvleteren/St. Sixtus yeast, while Westvleteren has used Westmalle’s yeast since the early 1990’s. While Abt 12 was originally based on Westvleteren Abt, it has achieved much renown in its own right in the last ten or fifteen years.

Brouwerij St. Bernardus has seen its beer sales increase at a rate of 10 to 15% per annum for several years, and major renovations and expansions are underway at present. Sales doubled from a 2003 level of 8,500 hl to 17,000 hl in 2009. Look for this brewery to continue to grow, and keep lots of beer lovers (like me) happy. See: sintbernardus.be and specialtybeer.com.

Needless to say, the Trappist beers of St-Sixtus/Westvleteren haven’t exactly been ignored by beer lovers, either! The Abbey is under construction and renovations as well. See: sintsixtus.be. 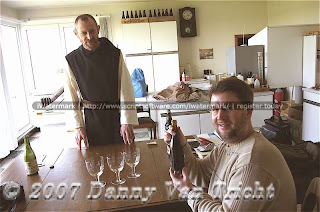 Photo, above: me and Brother Joris in the lab at Westvleteren,
about to open a 1969 Westvleteren Abt 12.
Posted by Chuck Cook at 7:40 PM

So, it appears the ABT 12 I have that is in a Methusila and 3 years old can age for some time. Does it make the beer better to age it, like wine?