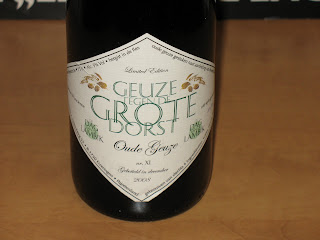 Yves and Kurt Panneels run what is arguably the world's
greatest lambic cafe: In de Verzekering Tegen de Grote Dorst.
The name translates as "In the Insurance against the Great Thirst."

Meaning: your thirst for lambic beers will be quenched when you visit! 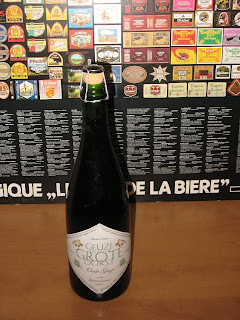 I wrote about the cafe here: Grote Dorst
Often called Grote Dorst for short, the atmospheric, friendly bar is located in the small town of Eizeringen, about ten miles west of Brussels. Grote Dorst is open on Sundays between 10 am and 1:30 pm, as well as during the three special fests held at the cafe each year.

These include the first beer festival the brothers organized, "The night of the Great Thirst", which occurs the Friday night before the Zythos fest in March on even-numbered years. The next one in Belgium will be in 2012. There will be a "Nacht van de Grote Dorst" somewhere in Maine, USA, in August, 2011. Those of you who know a certain much-loved beer bar in the Pine Tree state just might be able to guess where that event will be.
Another great event, which I attended this year, is Day of the Kriek (De Dag van de Kriek) on the first Saturday in June.
The last special day of the year falls in December: De Dag van de Lambik (The Day of the Lambic.) 15 different unblended lambic brews from nine different lambic producers were served on draft in the 2009 edition, and the same number are planned for the 2010 fest, which will be on December 12.

After the first Day of the Lambic in 2008, enough straight, unblended lambics were remaining after the event that Kurt and Yves decided to blend it all and make an Oude Geuze of their own.
Twenty-four 750 ml corked bottles and fifteen 1.5 liter Magnums were filled of Geuze Tegen de Grote Dorst Oude Geuze nr. XI.

This beer was blended from the following lambics:

The one shown in the photos, number 11 of 24, is one of the few that remain.
It's also probably the only bottle currently residing in Baltimore. 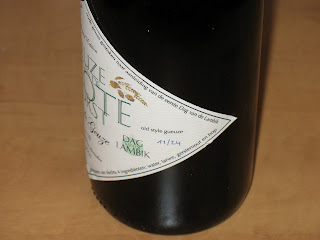 I have it on good authority that a certain bar owner in New England was offered many hundreds of dollars for a bottle-and turned down the offer! 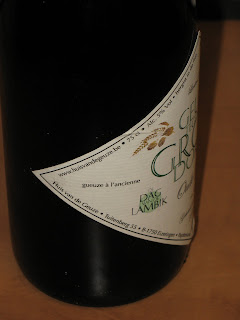 How does it taste? No idea....but it must be really good. 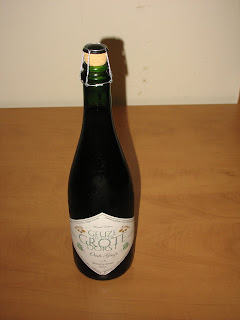