This article originally appeared in the June/July issue of
Celebrator Beer News.
Thanks to editor Tom Dalldorf for allowing me to republish it here. 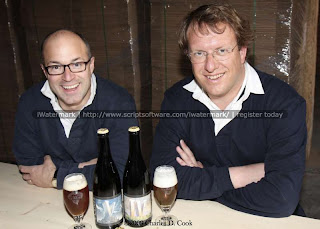 Top Photo: Alexandre Dumont de Chassart (left) and
Stéphane Meulemans, partners in Brasserie de Jandrain-Jandrenouille.
They have bottles of Saison V (left) and IV (right) in front of them.

“My wife and I bought this farm in 2005. Some of the old stone buildings date to 1749. We spent the first two years renovating it, and adding running water and electricity,” said Alexandre Dumont de Chassart, one of the two brewing partners of Brasserie Jandrain-Jandrenouille. The brewery, located in the province of Wallonian Brabant, about 30 minutes south of Brussels, is situated among gently rolling fields, near the small village of Jandrain. It is in a very rural location; a classic locale for a Farmhouse brewery.

“We opened our brewery in 2006, and sold the first beer in October 2007. We brewed about 150 hectos during the first year,” Stéphane Meulemans, Dumont’s partner, told me as we toured the brewery in April 2009. Stéphane and Alexandre’s day jobs? They work for Washington’s Yakima Chief in Louvain-la-Neuve, selling American hops in Europe and further afield. That’s beer karma, eh?

“I have spent a lot of time in the USA and Belgium drinking microbrews, with a constant quest for a new kind of product. It was only natural that I’d want to open a brewery some day,” Stéphane commented. “Alexandre and I met at the University of Louvain-la-Neuve while studying engineering. We were always experimenting with homebrewing. A commercial brewery, making the kind of beers we like, was the next step” he added. 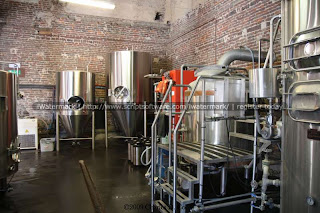 Photo, above: the brewhouse at Jandrain-Jandrenouille

The brewing system is made by Northern Breweries in the USA. It has a 10 hl batch size.

“Our well is over 60 meters deep” Alexandre told me. “The oldest part of the farm dates to the 14th century,” he continued. “In fact, this area was the scene of a battle between French and Austrian troops in 1740, as well as other battles through the centuries. Hence, the farm was designed so it could be completely enclosed and self-sufficient during those times.”

The first beer produced was Saison IV, named both for the four seasons and also its four ingredients: water, malt, hops and yeast. In fact, it also has four varieties of hops in its recipe. IV could also represent the fourth child of both partners, Stéphane mentioned. “It’s a little bit of a play on words,” he said, as Danny van Tricht and I tasted this refreshing brew. It has a pronounced hoppy character with citrus and grapefruit notes. No spices are used; just American and other hops, the varieties of which are a secret, except that one is Cascade. The beer is dry-hopped, and eminently well-balanced, with about 30 ibu. I did find the draft version dangerously drinkable for its 6.5% abv. The bottled version was delicious as well. 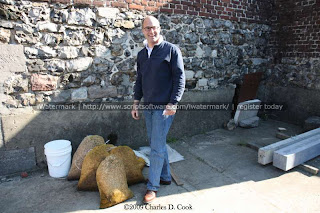 Photo, above: bags of used dry hops at Jandrain-Jandrenouille

“Our second beer was the V Cense, which is a little stronger and maltier than the IV, with 7.5% abv. It is an Amber beer, with five ingredients and 30 ibu. It’s also dry-hopped,” said Alexandre. He added: “The V Cense has a more complex mouthfeel and aroma than the IV Saison. It is brewed with 3 different malts (Pils, Munich, and Caramel) and has very light spicing.”

“We want our beers to be earthy and not too soft or well-rounded. The fruitiness should come primarily from the hops and not fermentation or spices. In fact, our newest beer is a kind of Blanche, or Witbier. This wheat beer, which we have not yet named, will use no spicing in its recipe. Aromatic American hops will provide its specific taste, flavor and aroma character,” Alexandre told me in early May.

About 200 hectos of beer were produced at Jandrain-Jandrenouille in 2009, and the partners predict about 300 to 400 hectos will be brewed in 2010. “We are waiting for a couple of new 36 hl fermenting tanks, so we can expand capacity” Alexandre commented. “And we have a couple of students working here during the week, as we work our day jobs,” he added. “So things are going well.” 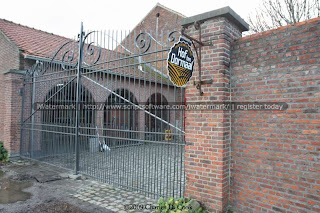 In a rural area in the Province of Flemish Brabant, in Flanders, there is an even newer Farmhouse ale brewery: Hof ten Dormaal. “I bought the farm in 1999” brewer/owner Andre Jansssens told me, as we sat in the brewery on a cold December day. “This used to be a big farm, and it still is. It was founded around 1100, and the oldest part of current house dates to 1680.”

Just across the country road from the brewery, there is a pasture with a farm pond where Andre keeps several Belgian draft horses. It’s a very serene setting. On the same side of the road as the brewery is a remnant of more recent, turbulent time: a stone blockhouse that was part of the Maginot line. “Unfortunately, it didn’t stop the German army in WW II” Andre commented.

“I used to own an accounting business, and sold it to do something less stressful” Andre told me. “But I knew I couldn’t make a living just by farming, so I opened the brewery in May 2009. A brewing engineer from the brewing school at Leuven helped, and created the recipes.” 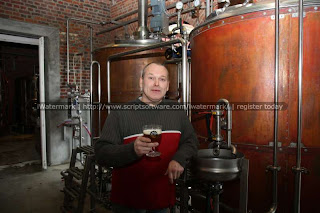 The brewery? It comes second hand from the USA. It was formerly at a John Harvard’s brewhouse; Andre bought it in Montana. “The weak dollar really helped, as it was too expensive to buy a new brewery,” he added.

And the brewery concept? “We want to be as self-sufficient as possible. We grow and mill all of our own grain, and grow all our own hops. We also want to cultivate out own yeast strain, and power the brewery with rapeseed oil that we produce,” Andre commented. All very ambitious goals, no doubt! Hopefully, the family will succeed in all these endeavors. 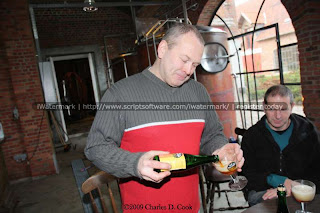 Photo, above: Andre pouring an Amber

“The Blond is an ale of 8% abv, that has a distinct, yet balanced, hop presence. It is made in the style of our traditional Belgian Saisons, but with a slightly bigger body. The Amber is a 7.5% spiced ale, with a delicate balance between sweet and bitter. Both are very effervescent, refreshing, and easy drinking” Andre told me, as we sipped an Amber. It was quite delectable, as was the Blond. “As you can see, we package them in 375 ml, corked bottles. I also fill limited numbers of 20 and 30 liter kegs, and we did a Christmas beer this year as well,” he added. See: hoftendormaal.com and 12percentimports.com. 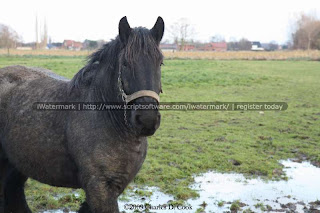 I remember trying a beer at Chez Moeder Lambic about 3 years ago that I particularly liked. The only thing I remembered, was that it's name was IV, but never found out what was the brewery. Now I know. Thanks! Look forward to sample more from Brasserie de Jandrain-Jandrenouille.