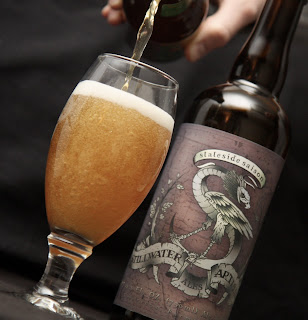 There’s a little bit of Belgium coming to Baltimore.

I sat down with Brian for an informal interview a few days ago. He describes Stateside Saison as “An ‘American Farmhouse Ale.’ It’s a Belgian-inspired brew that uses a combination of European malts, hops from New Zealand and the United States, and a classic farmhouse yeast to achieve a fruity, yet spicy, melange of flavors and aroma.”

Brian took the big step from accomplished homebrewer to professional brewer on January 14, when he brewed 30 barrels of the Saison.

Formerly a renowned techno D.J. and producer, Brian spent years traveling the globe spreading his unique sounds. He remarked: “A lot of my touring was done in Europe, so I had fairly decent exposure to good beer over the years. After my last tour, in 2004, I returned home to delve into a new passion: homebrewing.”

Perhaps an unexpected shift, but one he states was actually inspired more by his time at home in Baltimore: "When I was not traveling, my friends and I spent a lot of time at the Brewer's Art drinking their Belgian-themed house-brewed ales."

He now credits the Brewers Art as not just an inspiration, but also an "invaluable resource" when it came to putting together the Stillwater Artisanal project.

Brian cut his teeth by ranking in some local homebrew competitions, which eventually led to wins in both the Sam Adams Longshot and Holiday Competitions, as well as the AHA (American Homebrewer’s Association) Nationals. 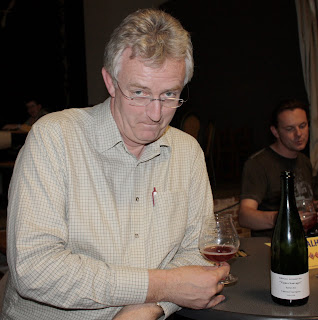 Above photo: Tim Webb, the Internationally renowned Belgian beer expert and author of the “Good Beer Guide to Belgium" shown sampling one of Brian’s wild ales at the 2008 “Weekend of Spontaneous Fermentation” in Buggenhout, Belgium.

About his brewing philosophy, he told me: “I have never been good at staying within guidelines. In fact, I only like to use them as reference points. My tendency has always been to stray off course and pick up bits of inspiration from here and there. This is just as much an artistic endeavor for me as it is a business.”

"Distribution throughout the mid-Atlantic region will begin by mid to late March. Stateside Saison will be available in kegs, casks, and 750ml bottles through Twelve Percent Imports" Brian mentioned.

“I hear you just bought a plane ticket to Belgium” I remarked, as we concluded our talk.


Things could get interesting. 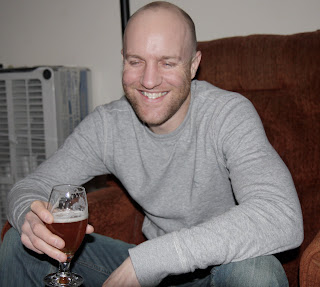 Above photo: Brian Strumke, aka Brian Stillwater.
Posted by Chuck Cook at 9:14 PM

Brian's an awesome brewery. It's great to see him going public with his project. He has made some of the most interesting and refreshing beers I've had in years.

Congrats Brian! The world needs more innovative entrepreneurs like you!