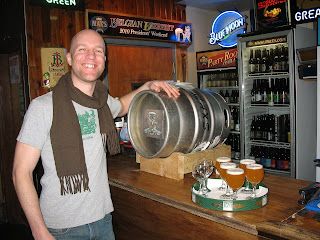 
Baltimore’s newest brewer has met the beer drinking public, and they have met his beers.

Max’s Taphouse, located in the Fell’s Point neighborhood of Baltimore, hosted a Press/VIP rollout event for Stillwater Artisanal Ales last Saturday the 13th. Local and regional beer bloggers, beer writers and other VIP’s attended the party, beginning at 10 am-an early hour for many, who had been at Max’s much of the previous day, the first of the Sixth annual Belgian beer fest.

“We felt it was great timing, as well as very appropriate, to hold Stillwater Ales first official event right here in Baltimore, during Max’s Belgian fest” brewer and founder Brian Strumke, aka Brian Stillwater, said during the gathering. 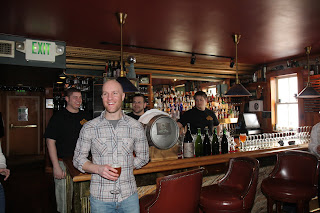 Photo: Brian at the Press/VIP rollout event inside the Mobtown Lounge at Max's Taphouse

Stillwater’s first beer debuted to the public on Friday the 12th: a dry-hopped version of Stateside Saison, served from a firkin on Max’s main bar. Even though samples were limited to wine-glass size, the firkin was gone by around 3 pm, some four hours after the fest opened to an enthusiastic crowd.

“I was very happy by the way the beer turned out” Stillwater remarked.

A firkin of French-oak aged, dry-hopped Stateside Saison was the main libation during the Press event. It was drained within an hour by thirsty attendees. Count me among them!

Stillwater also broke out some other goodies (all in bottles) such as a Magnum of Cabernet Sauvignon Lambic, which rivaled many of the great brews produced in Belgium’s Payottenland. This dry, tart, sour, complex brew had nuances of both Kriek and Framboise.

Also featured was Stillwater Kriek, another fine sour brew made with Maryland cherries.

Stillwater showed off more Saison-ish prowess with two different versions of “Of Love and Regret” a brew spiced with spring botanicals. The base beer was eminently pleasing, and the second, with the addition of Chardonnay grapes and brett, was also a serious crowd-pleaser.

Last, but not even close to least, was "A Saison Darkly" a delicious dark Saison with 8% abv, brewed with rose hips and hibiscus.

Look for Stateside Saison in 750 ml bottles in bars and retail stores by mid-March, as well as on draft in select bars in the mid-Atlantic region.

Belgian fest Director Casey Hard and the rest of the crew at Max’s, including Bob Simko, Jamie Ritter, Jason Mislan, Jessica and many others, did a great job running the event over the long three day weekend.

“It was our best Belgian fest so far” Casey told me after the weekend.

See you there next year! 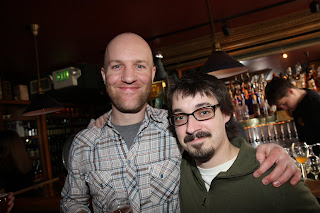 Dammit, I wish you had told me of the 10 AM event so I could have made it. It would have been nice to get there before I had to run chainsaws at the Streetcar Museum and then get stuck when my car wouldn't start, then have to run home and fix the %$*&#!@ washing machine--TWICE. If I had started with your event, at least SOMETHING would have gone right that day.

Dammit, I wish you had told me of the 10 AM event so I could have made it. It would have been nice to get there before I had to run chainsaws at the Streetcar Museum and then get stuck when my car wouldn't start, then have to run home and fix the %$*&#!@ washing machine--TWICE --- i feel for you friend... :(

Stillwater Artisanal Ales is a great addition to the Baltimore area. A nice evening is in order with a Stillwater in a cool bar with great vintage decor and large wall mirrors. Cheers!