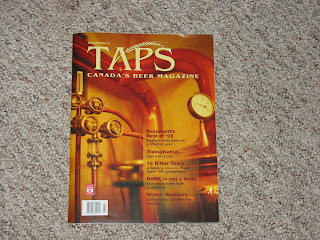 I just received the Winter issue of Taps: Canada's Beer magazine, and I'm happy to say that I have a 700 word piece on the 2009 Great American Beer festival.

In addition to discussing America's great beer festival, I also mentioned some other events that occur during GABF week, such as Dr. Bill Sysak's legendary tastings at Falling Rock Taphouse.

Taps is available at: www.tapsmagazine.com.

An on-line version of the magazine is available, as well as the print version.
Posted by Chuck Cook at 7:37 AM

Great stuff ! Seeu in May !