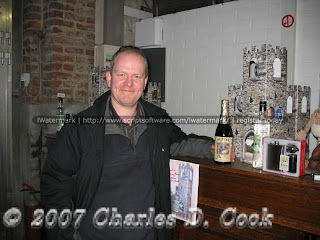 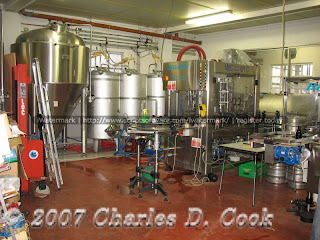 One of the smaller Belgian breweries that I have visited in the last couple of years is Brouwerij De Graal, located in Brakel, in the Province of East Flanders. Brewer/owner Wim Saeyens was a homebrewer for years before opening the brewery in 2002. Wim has a Ph.D. in chemistry, and attended the brewing school at the University of Ghent.
De Graal products include Gember, the first commercial beer, brewed with Ginger, as well as Blond, Dubbel, Speciale and Tripel.
I visited in December, 2007, with Belgian beer lover Carl Kins of Kortrijk and Mark Smith of Ohio. The temp inside the brewery was a cool 55 degrees, but we were soon warmed by the De Graal beers!
We found the Gember to be very well balanced and not overly spicy. Its 8% alcohol is well hidden. As to its prime ingredient, Wim had this to say: “I mill (grind) dried ginger root and add it to the beer. It’s a natural ingredient.”
Wim pointed out that he has four brewing kettles, two boiling kettles and two lauter tuns: “This is so I can brew continuously on a brewing day. I usually produce about 550 to 600 liters of beer per batch, or about 2.4 hectos per day.” About 750 hectoliters were produced in 2008.
De Graal also has Bierbrand, a sort of bier schnapps distilled from six of Wim’s brews, produced at a distillery near Oudenaarde. We all found this 40% abv tipple to be very good. Sadly, I don’t believe Shelton Brothers, which imports the De Graal brews, imports Bierbrand.
De Graal has several interesting beers, including Triverius, a strong wheat beer with 6.8% that was commissioned by the town of Brakel to mark an important anniversary. “It could be classified as a Double White beer, as some similar brews are now being called” Wim told us as we enjoyed a sample.
Wim enjoys bitter, hoppy beers, so he was receptive when Carl Kins asked him to brew a special beer a couple of years ago. Carl related the story to us “I travel to the U.S. every year, for the GABF and other events. I wanted to have a special local Belgian brew crafted for my 50th birthday: one with American hops and Belgian yeast. So, I asked Wim to brew SloCK, and it has now become so popular that it is a regular De Graal beer. It has 55 ibu and 6.5% abv, but it’s not really an IPA. It has a fruity character due to the hops used. It’s also very drinkable but not overpowering. There are no herbs or spices used either.”
The De Graal beers are unpasteurized. A centrifuge is used to remove any remaining hop pellets. German Hallertauer hops are used in some of the beers. A different yeast is used for brewing than for bottling conditioning. In fact, Wim uses several different yeast strains for in his beers. Blond, Dubbel and Gember have the same yeast, while the other beers use different yeasts.
De Graal has an Italian bottling line which can fill 33 cl and 75 cl bottles. Shelton Brothers imports only the 75 cl bottles into the U.S.
Wim mentioned lots of plans to expand the brewery and add new equipment during our visit.
I enjoyed the beers of De Graal, and I think this is a brewery to watch in the future. 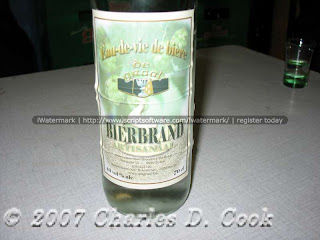 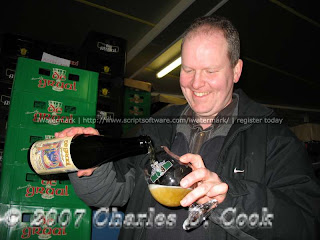 hey just curious. how do you pronounce "Triverius"?