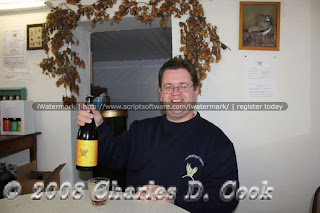 Photo: brewer/owner Frédéric Baert, with a 75 cl bottle of Blonde. 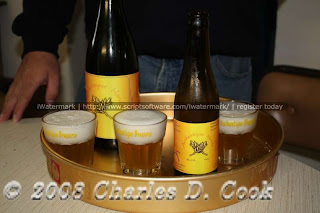 I had the pleasure of visiting one of Belgium’s smallest breweries back last May 31st.
As part of my tour of Wallonian breweries, Belgian beer lover Carl Kins (of Kortrijk) and I visited Brasserie Authentique in Blaton, Hainaut Province.

“I brewed 60 hectos of beer in 2007” brewer/owner Frédéric Baert told us as we toured the brewery, one of the smallest in Belgium. “I plan to produce about 120 hectos this year (2008)” he continued.

Baert has plans to buy a new brewkettle in February of this year. The present ones are made for dairy use; yes, as in milk! I’ve seen such kettles at other small breweries, such as La Frasnoise in Frasnes-lez-Buissenal, also in Hainaut Province. They must be much cheaper for small breweries than new brewkettles.

The fermentation tanks were brand new in early 2008.

Brasserie Authentique opened in 2004. Up till last year, Baert was brewing just once per week, but he told me plans to brew twice per week in 2009, and has a goal of achieving 500 hl of production in the near future.

The two flagship beers are the Blonde and Triple. The Blonde has 6.5% abv, and is flavored with coriander and white pepper. The hops used are Brewer’s Gold and Hallertau.
I found it a very pleasant and easy drinking beer, with interesting spice notes. The Triple has 9.5% abv, and uses the same hops. Both are offered in 33 and 75 cl bottles. The other brews are all in 33 cl bottles, which are usually purchased new.

I found the Ambrée (Amber) to be a very fine beer, with a lot of body and flavor for its 5% abv. It has only Brewer’s Gold hops in its recipe.

The Noel (10.5%) uses star anise and Belgian juniper in its recipe. Sadly, though not surprisingly, it was out of stock when I visited .

The Authentique brews can typically be found at Delirium Cafe in Brussels and the HopDuvel beer warehouse in Ghent, among other places.

Baert is looking to expand, as he needs more room for warm-conditioning, storage and other things. He also wants to buy a new, larger bottle-filler and better bottle labeler.

Baert told me I was the first English-speaking journalist to visit his brewery, which was a surprise. Authentique was also the 75th Belgian brewery I had visited, so it was a fine little tour and tasting. 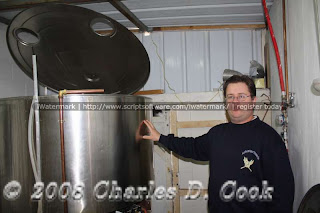 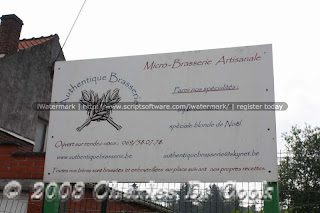