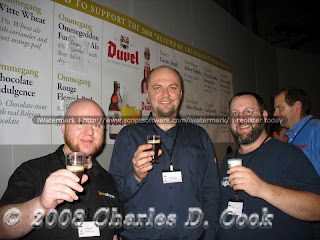 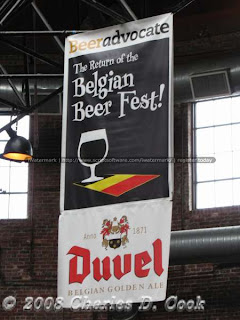 Over the past weekend, I attended the Beeradvocate Belgian Beer Fest for the third year in a row, and I'm happy to say this one was another very successful event for the Alström Brothers, Jason & Todd. "All three sessions sold out several days in advance" Todd told me happily, as we spoke during the "Night of the Funk" on Friday, September 26.

About 500 tickets were sold to the "Night of the Funk" which featured standout brews like Cambridge Brewing Delilah, a blend of barrel aged strong golden ale with Brettanomyces Anomalous and Bruxellensis, and an herbed blonde gruit beer.
I had lunch at Cambridge the same day, and brewmaster Will Meyers was doing some experimental blending while I was there. The food and beers at Cambridge are very good, and it's a must stop while in the Boston area.

There was a plethora of great brews during both Saturday sessions. With about 1,000 tickets sold per session, the fest remained comfortable and not packed to the gills as other beer fests sometimes are. There was good food available, such as waffles, Flemish Beef stew, mussels, bratwursts and more. A chocolatier was on hand, and the free samples were very well received. I know, as I went back for seconds and thirds. Fourths, even!

See http://beeradvocate.com for info on future Beeradvocate beer fests at the Cyclorama in Boston. The next BA fest is the Extreme Beer Fest February 20-21, 2009. 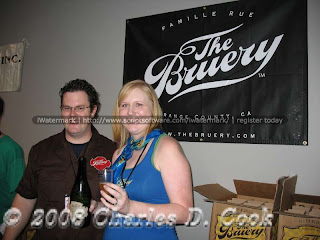 Patrick and Rachel Rue, of the Bruery. Their beers were very well enjoyed at the fest!
Posted by Chuck Cook at 11:19 AM

That was a great weekend.