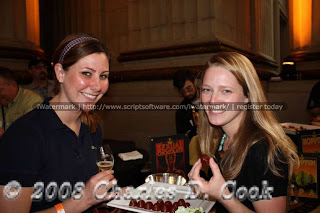 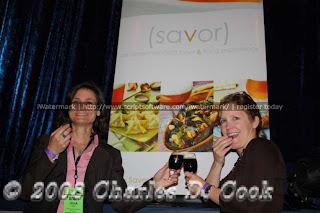 Bottom photo: Julia and Cindy of the Brewer's Association


(Note: this article was originally intended to run in Celebrator Beer News, however with all the great coverage of Food and Beer in the new October/November issue, there was not enough room for it. However, Lucy Saunders does talk about SAVOR in her article "Dreams of Food for a Fest" on page 10 of the new CBN.)

An event to SAVOR, in Washington, D.C.

“All three sessions, with 700 attendees each, sold out in advance!” said Julia Herz, Craft Beer Program Director for the Brewer’s Association. SAVOR, described as “an American Craft Beer and Food Experience” by the BA, featured a smorgasbord of great beers from across the USA, and fine foods to match. There were 96 different beers offered from 48 different breweries, as well as 35 appetizers, which were served like tapas.
The variety of delicacies was very wide ranging, with such treats as succulent Tenderloin Bruschetta; Lager Steamed Thai Turkey with Shiitake Dumplings; and sweet treats from Christopher Elbow Artisanal Chocolates of Kansas City, which had five different chocolates on hand. Having been to Belgium 17 times, I know great chocolates, and these were among the best I have tasted on this side of the pond. Those of you living in the Bay Area should be happy to know that this chocolatier opened a location in San Francisco in March! See christopherelbowchocolates.com.
The beer selection was equally as interesting, as many of the brews at SAVOR are not normally available in the D.C. area. Breweries from across the country were on hand, such as Deschutes, with Mirror Pond Pale Ale and Black Butte Porter, paired with Blue Cheese and Walnut Shortbread Rounds; Four Peaks Brewing with Kiltlifter and 8th Street Ale; Great Lakes from Cleveland, with Elliot Ness Amber Lager, paired with Stilton Bacon and Scallion Puffs; New Albanian Brewing, with Hoptimus Imperial IPA and Thunderfoot Oak Aged Cherry Imperial Stout, paired with Artisan Cheese from Capriale Farm; New Belgium Brewing with Abbey Dubbel and Mothership Wit, paired with Peking Duck Purses; and, among many others, Santa Cruz Mountain Brewing’s Devout Stout, which paired well with Christopher Elbow’s Raspberry Chocolates.
Tomme Arthur of Port Brewing wowed the crowd with Judgment Day Abbey Ale and Veritas 003. Natalie Cilurzo of Russian River was busy every session, serving up Pliny the Elder and Supplication to throngs of eager beer lovers.
East coast favorites such as Allagash, Brooklyn, Clipper City, Dogfish Head, Stoudt’s and Troegs were on hand as well. From the Midwest, breweries like New Holland, the St. Louis Brewery, Sprecher, and Two Brothers were standouts.
SAVOR also featured a number of seminars (referred to as Salons by the BA) on various beer and food subjects, such as one on beer and cheese pairings by Garrett Oliver; and another with Hugh Sisson of Baltimore’s Clipper City Brewing, on how to pair foods/seafoods from the Chesapeake Bay area with great beers.
I attended a Salon called “Cross Drinking Without Social Stigma” with Lauren Buzzeo of Wine Enthusiast Magazine, Ray Isle of Food and Wine Magazine, and Ken Wells of Conde Nast Portfolio. The subject: Wine writers and their beer drinking preferences, and how drinking great beers had changed their perceptions of malted beverages. Each writer chose a different beer to pair with a cheese or chocolate, and all attendees were given the same three samples, as part of a blind tasting. The audience was nearly split among the three writers as to which had chosen the best food and beer pairing.
The next Salon featured none other than Sam Calagione of Dogfish Head and Marnie Old, who is both an Assistant Dean of the French Culinary Institute, and a Wine Sommelier. The subject: a debate on pairing foods with wine and beer. Needless to say, it was a spirited one, as always when Sam and Marnie clash. Not that I’m biased, but Sam carried the debate with his beer and food pairings. OK, maybe I am biased! Beer and food can pair superbly.
Any upscale event, which SAVOR certainly was, needs a classy venue to set the stage. The Andrew W. Mellon Auditorium, an ornate building completed in 1934, was the perfect locale for the event. The Mellon Auditorium has been described as one of the finest examples of Classical Revival Architecture in America. The Brewer’s Association certainly did their research in choosing the site for SAVOR.
As to the future of SAVOR, Julia Herz had this to say: “The Brewer’s Association is receiving feedback daily on SAVOR, and we will be discussing, over the next few months, the event and its future.” See beertown.org. 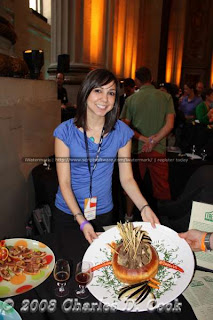 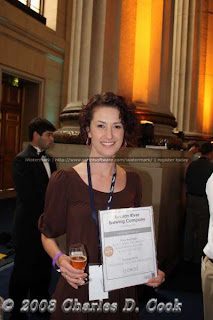 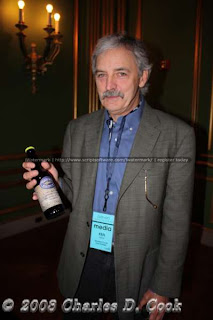