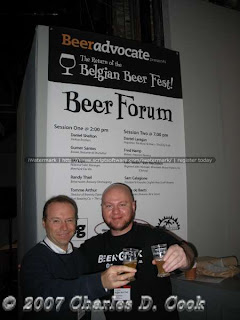 
In just a few short weeks, one of the premier Belgian beer events in North America returns to its home in Boston. The Brothers Alstrom, Jason and Todd, will once again lead the way in organizing "The Return of the Belgian Beer Fest" at the Cyclorama.
I attended the event in 2006 and 2007, and was suitably impressed. The beer and brewery list covered a who's who in Belgian and Belgian-inspired brewing, and the guest speakers were some of the most noted in the industry. While the speaker list has not been posted yet for this year's event, to be held Sept. 26-27, I'd say that judging by last year, when Trappistes Rochefort brewmaster Gumer Santos and Yvan de Baets of Brasserie de la Senne were guests, beer lovers can expect some well known figures at the event.