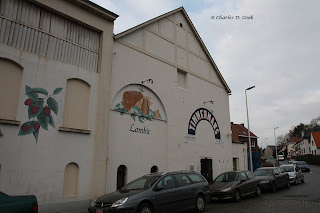 When I first visited lambic brewer Brouwerij Timmermans
of Itterbeek in November 2008, I was impressed.  Belgian
reporter/photographer Danny Van Tricht and I tasted several
different vintages of lambic and kriekenlambic right from
their oak barrels; these had from a few months of age to
several years, and were as good as other straight lambics
I had tasted from other well known lambic breweries and
blenderies. 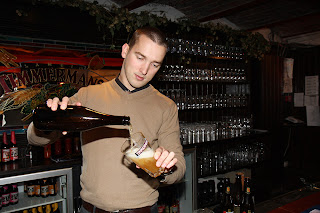 Photo, above: Dimitri Demol pouring a
Timmermans Oude Gueuze in 2008.

Our guide, Key Account Manager Dimitri Demol, then
mentioned that Timmermans had blended an Oude Gueuze
for the first time in many years. We tasted it, and found it
a very pleasing, tart, refreshing brew. An unsweetened,
proper Oude Gueuze. 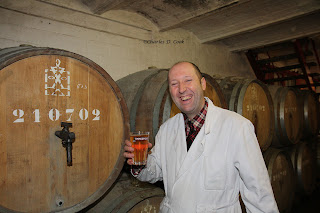 A sample of Timmermans lambic, right
from a barrel.

When Dimitri commented that an Oude Kriek was in the
works, I knew this would be a special one, as I greatly enjoyed
the one year old kriekenlambic we had tasted. 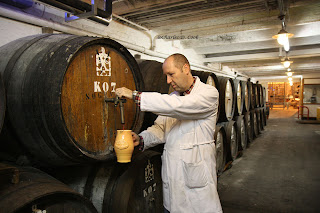 A crock of Timmermans kriekenlambic from
an oak barrel. Yum!


The Oude Gueuze had matured well by the time I attended
Toer de Geuze in April 2009, and now it is a one of the
brewery's year-round brews, and is available in the USA. 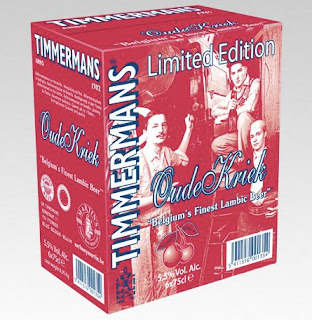 I'm happy to say that a batch of Oude Kriek is headed
stateside sometime in early 2013, and I highly recommend it,
having tasted it in Belgium several times now. 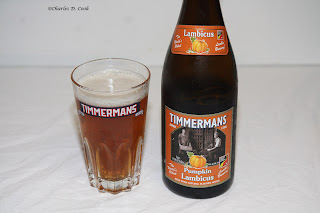 Timmermans has been experimenting a bit more in the last
few years, and for the first time sent a pumpkin infused
lambic to the U.S. this year, called Pumpkin Lambicus.
I will openly state that I am not a big fan of pumpkin beers,
but this one really pulled it off well. The pumpkin flavor and
spices are very mild, and a very pleasing tartness makes for a
well-balanced brew with minimal sweetness. At only 4% abv,
it is a great session beer. This one was a big hit at "A Weekend
of Belgian Beer" at Hudson Street Stackhouse in late October. 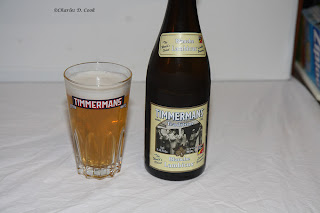 Timmermans also has a lambic-wheat beer blend, called
Timmermans Tradition Lambicus Blanche. This brew has
a base of malted wheat, with coriander and orange peel
added as spices. The lambic adds a light tartness to the
blend. This beer is very easy drinking, with a touch
of sweetness and 4.5% abv.

In addition, the brewery offers several other lambics
blended with various fruits.

I look forward to more innovation on the part of this
venerable, photogenic brewery, which was founded
in 1702. See: here
Posted by Chuck Cook at 12:41 PM