Beers of the World Magazine returns, with Limburg Province article 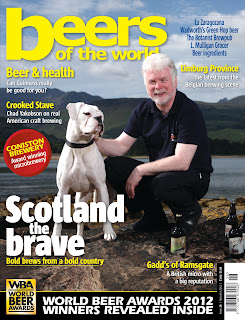 I'm happy to report that a great beer magazine has been
resurrected after a more than three year hiatus.

Beers of the World, of the U.K., which stopped publication
in 2009 after four years, has been purchased by a new
owner. It re-debuted in the UK with issue 26 in November,
and is now available in the USA at bookstores such as Barnes
and Noble.

Former editor Sally Toms is back at the helm, and excited is
to return to the world of craft brewing.

I have a 1,500+ word piece on breweries and cafes in Limburg
Province, featured on the cover of the magazine.

I'm not the only American with a Belgian beer article in the issue,
either: Joe Stange, co-auther of "Around Brussels in 80 Beers"
has a piece on Cafe De Kunstemaecker in West Flanders as well.

See: here for subscription information. Beers of the World is also
available for iPhone and iPad via an app at the iTunes store.

Beers of the World gave excellent coverage to Belgium's beer
scene in the past, and it seems that is going to continue with the
resurrected mag.

Cheers to that.
Posted by Chuck Cook at 2:16 PM