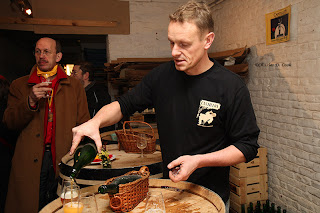 Photo, above: Jean Van Roy, brewmaster,
Brasserie Cantillon. A similar photo I took appears
on page 29 of the new "World Atlas of Beer."


There is some good news from just a few days ago, and it involves
one of my favorite Belgian breweries.

According to brusselsnews.be, Brasserie Cantillon of Brussels
started storing/aging/maturing beer in 2011 in huge World War II
underground bunkers in Brussels. 8,000 bottles are already resting
in the spot below the Hookai and Arduinkaai streets, which are
near the Yser metro stop, and the Leopold tunnel in central Brussels.

The article quotes Cantillon brewmaster Jean Van Roy as saying
that 2,000 visitors tour the Cantillon brewery each month, and that
they now produce 1,700 hl of beer per year.

The idea of storing beer in huge cellars began with a visit to a
champagne maker in Reims. Van Roy enlisted the help of the city
of Brussels to find a suitable place close to home.

It is said there are seven basement rooms, each with 15 square
meters of space.

Van Roy was quoted as having measured the temperature:
10 degrees celsius/50 fahrenheit in winter, and a max of
21 C/ 70 F in the heat of summer. 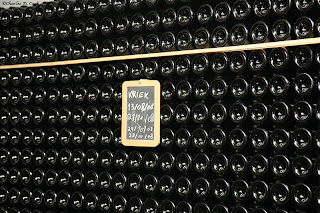 
Cantillon signed a 30 year lease, as they view is as a long-term
project. Van Roy is quoted as saying they will add 3,000 to
4,000 bottles per year to the cellars, so that it might contain as
many as 80,000 bottles in twenty years.

Mostly, they are storing Oude Gueuze, but also lambic and Lou
Pepe Kriek. Some of the bottles date as far back as 2002. It is
said that Cantillon also is producing some bottles destined specially
for the cellar, such as an Oude Gueuze with a 2, 3, and 4 year old
blend, rather than the normal blend of 1, 2 and 3 year old. As well,
bottles sizes up to six liters are being aged there.

Van Roy was also quoted as saying he doesn't know if or when he
will sell any of the beer in the cellar.

He also said that in the year his son Florian was born, 1996, he began
to save and cellar certain amounts of bottles.

The articles goes on to say that next Saturday, November 10, will be
an open brew day, from 6:30 AM to 5 PM. See here for more details.

The original story is here