"The World Atlas of Beer" published, and Cantillon's Quintessence 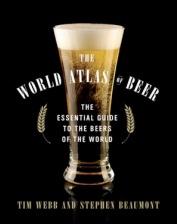 "The World Atlas of Beer" was recently published, and it is
a must read book. The authors are Tim Webb and Stephen Beaumont,
both well known in Belgian and other beer circles.

Before I proceed, I will let you know, in the interest of disclosure,
that I did have two of my photographs published in the book,
which I'm very pleased about.

The first is of brewer Jean Van Roy of Brasserie Cantillon
in Brussels, on page 29a (top.) This half-page photo was taken in
November 2008, during the Quintessence, Cantillon's twice yearly
beer and food pairing event. In fact, the event has become so
popular that the next Quintessence will be held over two days. 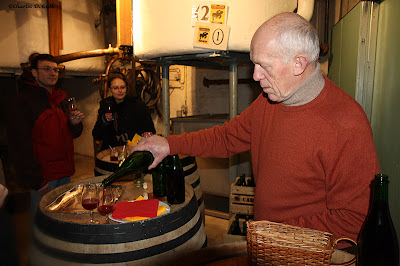 (Photo, above: Jean-Pierre Van Roy pouring at Cantillon's
Quintessence in 2008. Jean-Pierre's son, Jean, is pictured
on page 29/top photo in "The World Atlas of Beer.")

It's next weekend. Yep, if you are in Belgium next weekend,
get there! Friday, 5 October will be reserved for members of
the "Brussels' Museum of Gueuze"and professionals in the beer
world, while Saturday will be for the general public.
The menu and details are here

The second photo is that of brewmaster Dirk Naudts of De
Proefbrouwerij in Lochristi, East Flanders, on page 77. This
photo also occupies a half page in the book.

To have a look at these photos, you'll just have to get a copy
of the book. :)

While I have not read "The World Atlas of Beer" from cover to
cover, I have read most of the section on Belgium-no surprise
there! It is certainly a fine introduction and overview of Belgium's
brewing heritage, styles, breweries and cafes. While written with a
general audience in mind, it will still be of much interest to
well-informed beer lovers. A good balance has been achieved
between appealing to Belgian beerophiles and keeping things
simple enough for novices to enjoy and understand.

In short, well done on the Belgian section. In fact, all the sections
of the book that I have read seem well-researched and well illustrated.

I saw several copies at a Barnes and Noble here in Baltimore,
Maryland, this week, and they can be purchased on-line at Amazon here