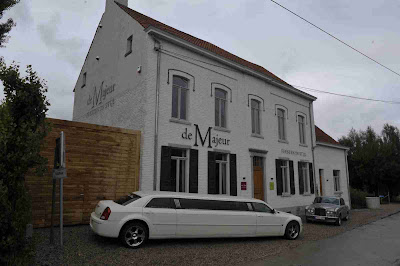 I mentioned there would be a very special beer dinner in
Belgium the week before the Zythos Bier Festival (ZBF)
on these pages a couple of months ago, here
Well, the details are now available, right from one of the
organizers, Yves Panneels of the fabulous In de Verzerkering
Tegen de Grote Dorst cafe in Lennik/Eizeringen.
I've helped a bit with the translation to English.
The event website is here 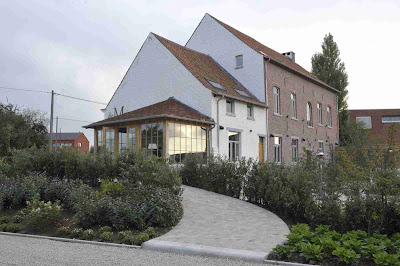 “The Great Belgian Beer Dinner of 2012” will be an exquisite culinary experience founded on a commitment to quality. It will be a major event in a prime location, with excellent beers, top class food, and the three best chefs in the world of beer.

Tom De Four of De Heeren van Liedekercke (Denderleeuw) with Stefanie de Vos of De Bistronoom (Ostend) and Chris Lively of Ebenezer's Pub & Restaurant (Lovell, Maine USA) will join together to serve a fantastic six-course meal on Wednesday, April 25, 2012. The location will be in the historical setting of 'De Majeur' in Roosdaal-Pamel, near Ninove. 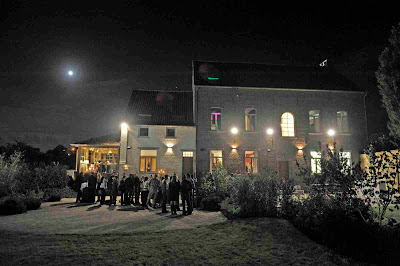 The chefs have also selected very special beers specifically for this meal.

Information: Date is Wednesday, April 25, 2012 at 7 pm at Feestzalen 'De Majeur' at Rijstraat 16, 1760 Roosdaal (Pamel.) The six-course meal costs 80 euro per person, drinks included. Seating is limited. Quick Registration will be the key to securing a seat.

STEFANIE De VOS,  of De Bistronoom, which, since September 2011, has been at the top of the RateBeer list of the best beer restaurants in the world, is the lady in the group. Stefanie, 28, works her magic in the kitchen, while her husband, beer sommelier Christophe Pelfrène (44) greets and serves the guests. Stefanie, along with 47 other young chefs, was recently selected as one of the “Young Faces of Flemish Gastronomy” through the organization “Flanders: Nice Country.” She was also nominated for the title “Lady Chef of the Year 2012.” The restaurant is located near the Ostend marina, near where the Mercator anchor is found. See:  www.debistronoom.be

CHRIS LIVELY  : Christopher Lively, 39, grew up in Texas, and after graduating from culinary school, went to work in California. He was the executive chef of the Marriott Hotel in Los Angeles, an important position. But Chris wanted his own beer restaurant, and he would have it. He moved to the other side of the United States, and settled in New England. Since 2004, he and his wife, Jennifer, have run Ebenezer Kezar's Pub & Restaurant in Lovell, Maine. From then till now, on Ratebeer.com, Ebenezer’s was voted four consecutive years the title of the “World's Best Beer Bar.” In 2009, Chris opened The Lion's Pride in Brunswick, Maine. Barely a year later, his second beer restaurant won second place on RateBeer. A very remarkable achievement. See:   www.ebenezerspub.net  and www.lionspridepub.com

The three chefs will prepare a fabulous 6-course dinner with exquisite beers. Soon, it will be disclosed in detail.

Feestzalen 'De Majeur' is located west of Brussels in the Payottenland, a stone's throw off the N8 from Brussels to Ninove road, in Roosdaal (Pamel). This restored brewery is surrounded by a beautiful garden. Inside, there are three beautiful banquet rooms with a capacity of 10 to 90 people.

'De Majeur', is run by Evy Vandenberghe. She graduated as a cook from the Hotel Ter Dunes in Koksijde. She gained experience in restaurants such as Juana in Nice, France, The Grand-Bigard in Bigard, the Pastoral Reet, 't Molentje in Zeebrugge, Tom Thumb in Aalter, 't Krekelhof in Gooik, and The Elephant in Halle. Together with her partner and building contractor, David Ore Note, they bought and renovated the dilapidated building at Rijstraat 16, Roosdaal-Pamel. This building was once a brewery, belonging to Frans Tondeurs (born 1838.) He was the mayor of Pamel from 1879 to 1907. “De Majeur” has all the amenities of home. Evy sets the background, with all the trimmings available, for The Great Belgian Beer Dinner 2012. The rooms are stylishly decorated. The beautiful romantic candlelit baths will set tables while guests are pampered with the finest cuisine.

The number of spaces for The Great Belgian Beer Dinner 2012 is limited. Quick Registration is the key. The price for the 6-course menu (including custom drinks) is 80 euro per person.  Upon reservation, 80 EUR per person is payable. The payment of this sum constitutes final reservation. Cancellations can only be made in writing (letter, fax or mail). Up until three weeks before the event, the entire sum paid will be refunded, minus 10 € administrative costs. Until two weeks before the event, half the sum paid will be refunded, minus 10 € administrative costs. Thereafter, no refunds will be given.