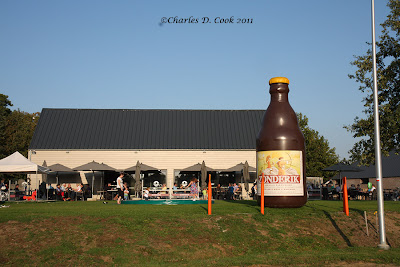 On the first day of my Belgian tour last autumn, I had
dinner at a great new beer cafe/restaurant in
Heusden-Zolder, near Hasselt in Limburg Province.
Brasserie de Bierkaai is located alongside a canal
that runs all the way from Antwerp to Maastricht.
It is an ideal location for cyclists-or anyone else-to
stop for a meal or just a beer. 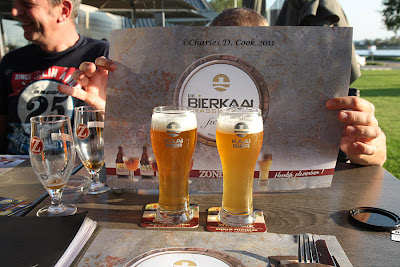 (Photo, above: Kaaibier, an unfiltered pilsner brewed at
Bier Anders in Halen.)
One of the owners, Luc Van Esch, is a serious beer lover
and it shows in "The Beer Quay." Luc has an unfiltered
pilsner called Kaaibier brewed at the new Bier Anders
brewery in nearby Halen. This delicious, 5% abv libation really
hit the spot on an 80 degree day on 24 September. 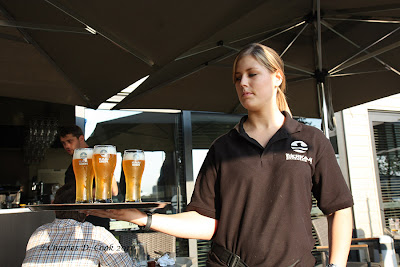 (Photo, above: a server with a trio of Kaaibeers.)
Luc told me recently: "The Kaaibier will be the basis
for our new Kaaikriek. Both beers will be available
within a few weeks in 25 cl longneck bottles, as well
as in draft here at De Bierkaai. Both will be available
for export as well." 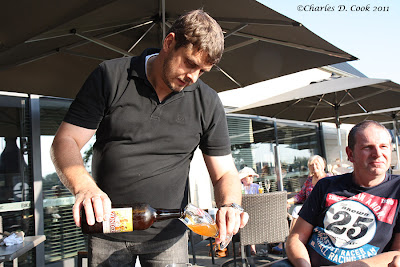 (Photo, above: Luc Van Esch pouring a Zonderik Tripel.)
Luc also has three other house beers. One is Zonderik
Tripel, and there is also a Dubbel. Both have 8% abv.
There is also a Tripel Speciaal packing 10% abv.
All were formerly brewed at De Proefbrouwerij, but
production has moved to Bier Anders for these as well. 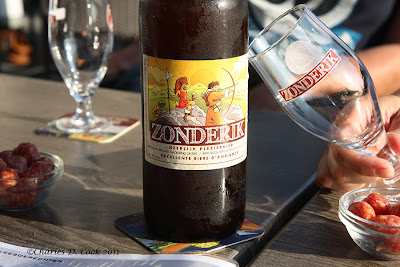 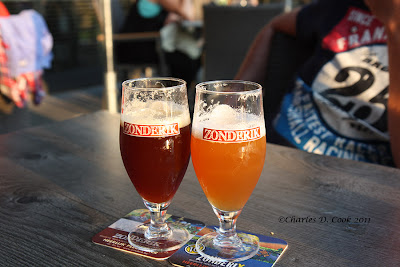 (Photo, above: Zonderik Dubbel and Tripel.)
Five beers are available on draft, with four of these being
the house beers. The Zonderik brews are offered in corked
75 cl bottles as well.
As you can see in the first photo, there is a huge blow-up
Zonderik Tripel bottle in the front yard of the cafe, letting
any beers lovers who pass by know this is a place that is
a welcome spot for them!
Brasserie de Bierkaai is also very family friendly as well.
They have a playground in front of the cafe as well. 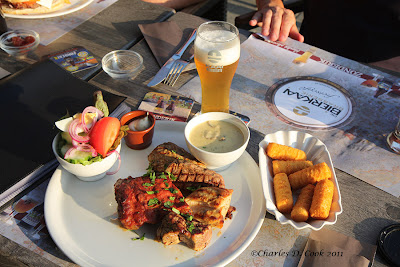 De Bierkaai also offers tasty meals at affordable prices.
I enjoyed a dinner of several mixed grills, paired with
one of my favorite Belgian side dishes: croquettes.
Most entrees are in the 8 to 13 euro ranges, and many
smaller snacks are in the 5 euro range.
See their website here
Menu here
De Bierkaai is located at Laarstraat 41/2, 3550,
Heusden-Zolder. Tel: 011/745883.
So you heard it here: a stop The Beer Quay is a
must when in the area!
Posted by Chuck Cook at 5:43 PM