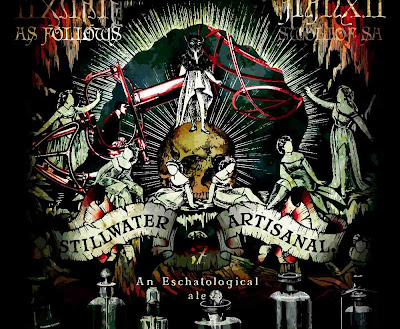 (Image, above: the label for Stillwater Artisanal Ales
second anniversary beer,"As Follows.")
See the bottle below! 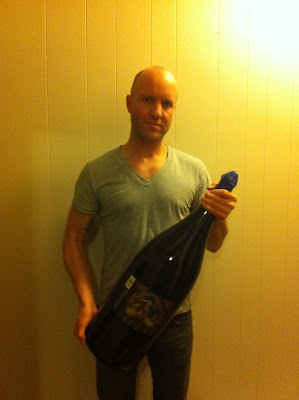 (Photo, above: Brian "Stillwater" Strumke with a nine
liter bottle of his 2nd anniversary beer, "As Follows."
It will be opened at 11 am tomorrow at Max's.
Better get there early!)
One of America's Premier Belgian beer events begins
tomorrow, and it's right here in my hometown of
Baltimore, Maryland.
The 8th Annual edition of Max's Belgian Beer Festival
will feature over 200 Belgian beers on draft and over
275 in bottles over the course of the weekend, running
through Sunday.
Max's 100 taps will rotate. As one keg kicks, Casey Hard
and crew replace with another.
As last year, I will have a slideshow running on Max's
big-screen TV (downstairs) showing images from about
70 Belgian breweries represented at the fest.
It will be about 1,100 slides total and run time will be
about 90 minutes from start to finish. It will run on a
loop all weekend beginning tomorrow around noon.
The rare ones I am looking forward to include Tilquin
Gueuze and many others.
See: Maxs for the draft list.
I hope to see you all at Max's this weekend!
Posted by Chuck Cook at 11:08 AM

this was a fantastic event, and nice running into you at the bar!