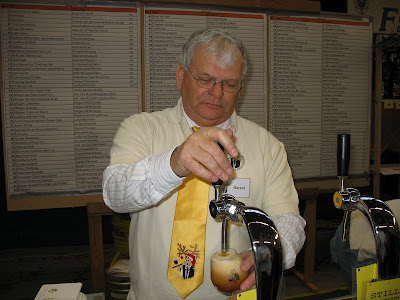 (Photo, above: an OBER member pouring a Christmas
beer in 2007. Note the tie. These guys are serious
about their beer fest!)

O.B.E.R. (roughly translated as "The Objective Beer Tasters
of the Essen Region") has been organizing what is
arguably the world's greatest festival of Christmas
and winter beers for many years now. Surely it is
easily the best for Belgian beers in those categories. 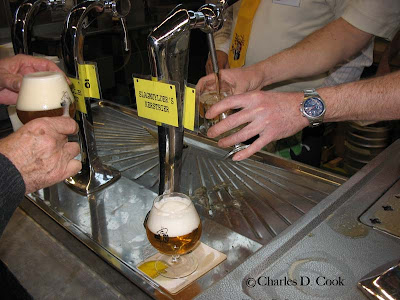 Sadly, I'm stateside this year, but for any of you
in Belgium this weekend (or wishing you were too!)
here's a little preview-and look back. 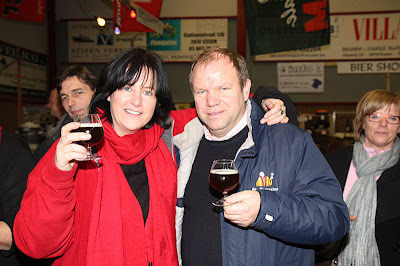 (Photo, above: Brewer Hans Depypere of Brouwerij
St. Bernardus in 2009, with his lady friend.
St. Bernardus Christmas was named the top Christmas
beer of the 2009 fest.)

For 2010, word from my friend and OBER webmaster
Gunter Mertens is that there will be around 155 beers
on the list, with about 25 new ones not available in 2009.
This includes 20 beers on tap, the rest in bottles.

Ones beer lovers are excited about include Zwet, a
Drie Fonteinen-De Proefbrouwerij collaboration beer,
and Hof ten Dormaal Winter 11, among many others. 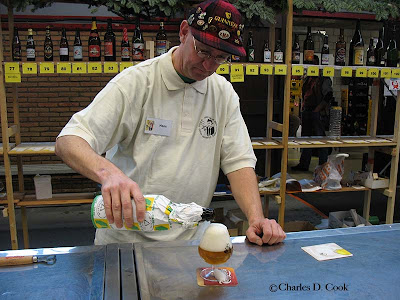 The article below, about the 2009 event, appeared in the
February/March 2010 issue of Celebrator Beer News. The world’s greatest Christmas beer festival just keeps getting better and better. Organized by O.B.E.R. (The Objective Beer Tasters of the Essen Region) the 15th edition of the “Kerstbier” fest, held at the Heuvelhall in Essen, Belgium, offered 157 beers, with 22 on draft. 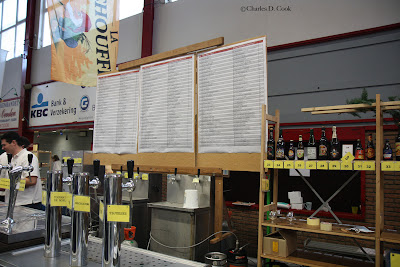 (Photo, above: the beer list is seen above the
taps here, and bottles begin on the right.)

“We even have five mulled cherry beers, called gluhkrieks, that we are offering hot today, at 65 degrees Celsius (nearly 150 degrees F)” Gunter Mertens, Secretary of O.B.E.R., told me during my visit to the fest on Saturday, December 12. “The rarest is perhaps the De Cam Hiete, from lambic blender Karel Goddeau. It is a genuine artisanal kriek with 40 kg (88 pounds) of cherries per 100 liters. We sweeten it a little with honey; it is then spiced at a rate of one small stick of cinnamon, twelve cloves, and one bay leaf per liter” Gunter mentioned. 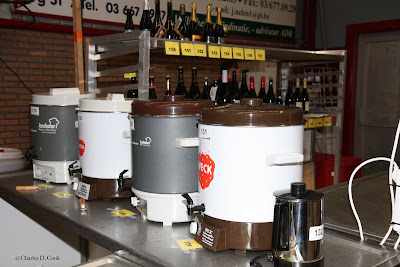 It didn’t take very long for me to traverse the fifteen or so feet separating me from the Hiete. It was delicious! I also tried the Timmermans Warme Kriek Chaude, Van Honsebrouck Premium Gluhkriek, and perhaps the original, Liefmans Gluhkriek. All were very good. Of course, it was a cold, windy day in Essen, and these warming elixers hit the spot at the beginning of the fest. 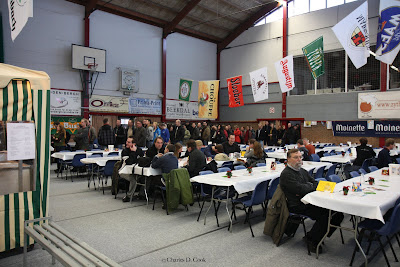 (Photo, above: shot in the hall just a few minutes
after the fest opened. Note the line to buy glasses
and tokens.)

Other interesting brews on draft were Kessel X-mas, from Brouwerij De Vlier; Tournay de Noel from Br. Cazeau; Loterbol Winterbol; and De Ryck Christmas. There were too many bottled brews to mention all my favorites, however several new ones are worth a mention, such as La Grelotte from Br. Grain ‘d Orge; Kerstbier from De Scheldebrouwerij; Pere Canard from Sint-Canarus; and Nondedju de Montaigu, a strong blond ale with a smoothness that belies its nearly 11 percent alcohol. 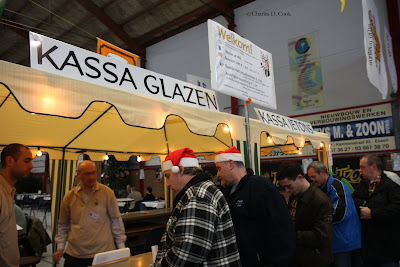 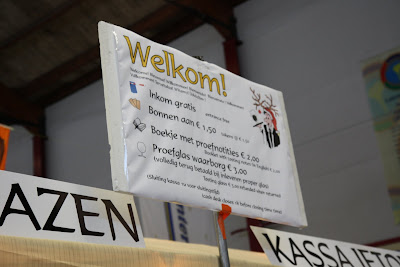 (Photos, above: here is where you buy tokens
and glasses.)

Most beers cost one token (1.5 euros, about $2.25) for a 15 cl/5 ounce glass, while a few special and rare brews cost 2 or 3 tokens. Such brews included Bush (Scaldis) de Nuits and Prestige (both 13% abv, and 3 tokens each) as well as four special Mikkeler beers that cost 2 tokens each, and were brewed at De Proefbrouwerij in Belgium, sent to Denmark, and reimported to Belgium for the fest. That’s dedication. 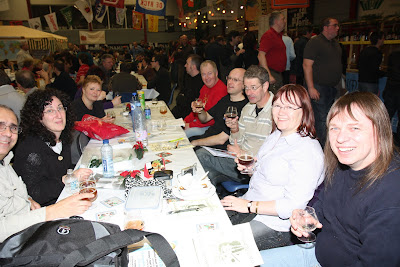 As usual, the OBER crew had snacks like Vlaams Carbonnade (Flemish beef tips in a gravy sauce) on offer, as well as a new feature: cheeses from three Trappist breweries: Chimay, Orval and Westmalle, served with bread.
Kudos to Gunter Mertens and the whole OBER crew for 15 Years of Christmas Beers!
See: kerstbierfestival.be. 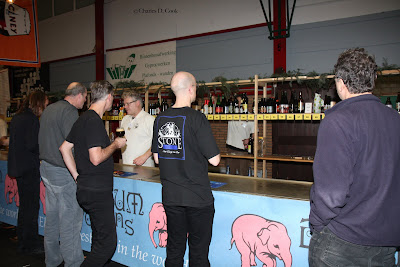 (Photo, above: if you see the gentleman in the
Stone shirt at the fest, be sure and buy him a beer.
Especially if he's wearing a Santa outfit. No, it's
not me.)
Posted by Chuck Cook at 8:32 PM

Hello brewers, that this Christmas will bring much happiness to all and many beers ...
Happy Christmas ...........
http://grandecervejeiro.blogspot.com/