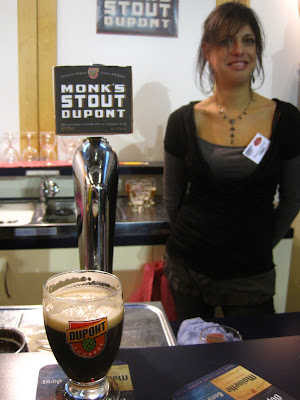 My friend Stu Stuart (who I hear runs some great beer
tours to Belgium) was over in "Belgie" last month,
and visited the superb HORECA Expo in Ghent, held
November 21-25.

HORECA stands for "Hotels, Restaurants and Cafes"
and the Expo is a trade fair for anything you'd need
for such an establishment in Belgium.

In fact, when I attended in 2008, there were at least
25 breweries set up with miniature pubs serving great
Belgian beer. Yes, it was heaven inside, as it snowed
outside. You could check out the latest, greatest new
restaurant equipment, have a beer, then return to
whatever you might be shopping for.

I stuck with beer.

The EXPO is often used as a place to debut new brews,
as with Brasserie Lefevbre's Hopus and Brouwerij's Bockor's
Omer in 2008. 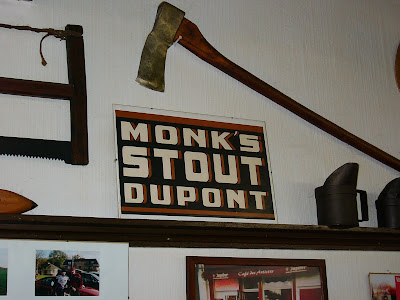 (Photo, above: an old Monk's Stout sign
hanging on the wall of Cafe Les Caves Dupont in
Tourpes, right across from the brewery.)

This year, one of the new brews is one I already knew about,
at least as far as concept. Brasserie Dupont Brewmaster/
Director Olivier Dedeycker told me on my June 2 visit to
the brewery that the next new brew on his agenda would
be Monk's Stout. This is a beer his grandfather brewed
in the 1950's. 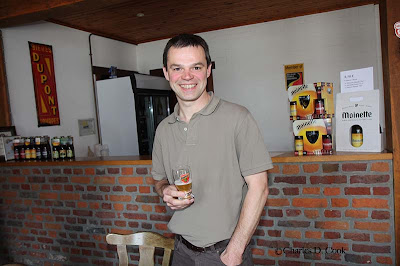 The first had been the dry-hopped Saison Dupont seen
in Belgium in the Spring. Yum. You get the picture.

As Dupont has extra fermentation capacity now,
Olivier has the luxury of crafting some new brews, or
re-creating some old specialties. 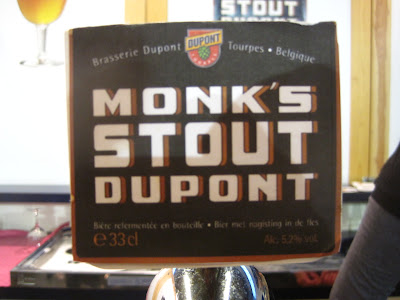 (Photo, above, by Stu Stuart.)

There are two versions of Monk's Stout. Both are 5.2% abv.
One is dry and roasty, and another is said to be a little more
rounded. Initial tasting reactions are that they are both
very tasty beers. I'd expect nothing less from this superb
brewery!

Monk's Stout is available in 33cl bottles and 20 liter
kegs in Belgium. Whether we'll see any stateside is yet
to be seen. Cross your fingers.

Or buy a plane ticket.
Posted by Chuck Cook at 7:43 AM