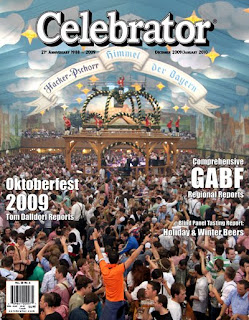 I have an 800 word article about what I call "Sour beer Rampage
II" in the December issue of Celebrator Beer News.
I wrote about many of the great sour beers (and breweries producing
them) that were available at GABF in 2009. The breweries were
Cascade Brewing, of Portland, Or.; Upstream Brewing, of Omaha,
Neb.; Trinity Brewing, of Colorado Springs, Co.; and the always
superb Russian River, Lost Abbey and Port Brewing.
I focused on sampling sour beers at three of the four
festival sessions.
Yum. It was great!
Posted by Chuck Cook at 4:24 PM