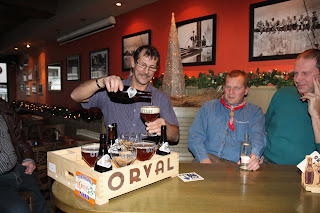 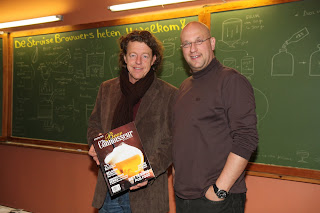 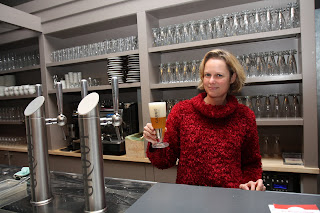 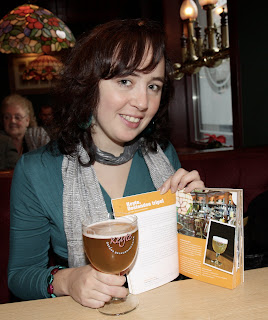 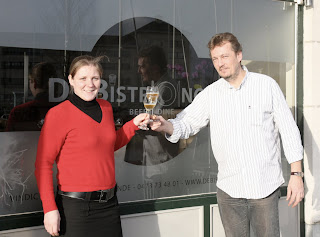 Eight days in Belgium, a major snowstorm, a head cold, and
two big articles with looming deadlines have sapped all my
extra time away.

I visited Belgium for the 20th time from December 6-14.
I toured seven breweries that were new to me (really eight;
I'll explain below) as well as Westvleteren, for a (great!!!) fourth
time.

It was the first time I had visited the brewery since I got
my new digital SLR, and the photos are very good.

I also went to De Struise Brouwers in Oostvleteren, at their
new brewery, "The Schoolhouse." Believe me, this is a place
you WANT to go and learn. Sit down and study brews like
Aardmonnik, Black Albert, Black Damnation, Dirty Horse,
Pannepot, Pannepeut, and more under the teutalege of Carlo,
Phil, and Urbain.

You just want might stay after class...no, you WILL want to stay
after class!!

I also went to the new location of De Vlier, which moved into a
larger building in the suburbs of Leuven. I had gone to the first
location, in Kessel-Lo, in April. As the brewery has the same name,
and same equipment as the first location, I'm only counting it as
one visit. Also on the agenda was a visit at Brouwerij St-Jozef in
Opitter, in Limburg Province. Opitter is the home of tennis star
Kim Clijsters.

Additionally, I went to Brouwerij Hof ten Dormaal, a new
farmhouse brewery with several interesting beers. The farm
is located in Tildonk, Antwerp Province, and most of the brewing
equipment comes secondhand from the U.S.A.

I also had a great time visiting Gents Stadsbrouwerij Gruut,
where no hops are used in any of the three brews crafted by
Annick De Splenter. Annick is Belgium's newest female brewmaster.
Her family used to own the now defunct Riva brewery in Dentergem.

There was a press release party for the new book "Proeven 100x
van straffe streekbieren" at Gruut on Tuesday, December 8.
Several brewmasters and many beer lovers were on hand. The
book, which covers 100 great Flemish beers and great cafes to
taste them, was co-authored by Bruno Loockx and
Sofie Vanrafelghem.

I also visited many great beery cafes on the trip, including the
new beer restaurant, De Bistronoom, as well as 't Botteltje in
Ostende; 't Brugs Beertje and Erasmus in Brugge; Aba-Jour,
Bierhuis Castel, and Het Waterhuis aan de Bierkant in Ghent;
Zaandvlooi in Kruishoutem; De Molen in Bierbeek; Ons Te Huis
and Het Haasken in Diest; Demervallei in Aarschot, a great place
with 450 beers; Herberg in de Ster (aka De Boeres Krant) in
Wezemaal; Herberg Piet Konijn in Booischot; Biercafe de Kluis
in Herenthout; De Stroopop in Zoersel; Oud Arsenaal and
Bierhuis Kulminator in Antwerp; Delirium Cafe and Moeder
Lambic Fontainas (the new Moeder Lambic) and Restobieres,
all in Brussels.
Posted by Chuck Cook at 11:21 AM

I saw some of the treats you brought back from this latest trip and can say, without a doubt, you are one blessed S.O.B!

Keep up the good work and please post more.

Wow. Quite a productive trip!! Good to see so much new stuff going on. I'm glad your keeping on top of all of these changes. I hope you have some articles on tap to cover all of this.