Belgium, trip 19: the last day, plus highlights of the trip 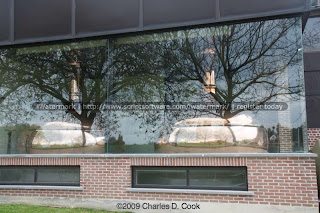 I visited the Westmalle Trappist brewery for the fourth time on Tuesday the 28th, then had a fine meal at the new Cafe Trappisten.
Later I visited the Domus Huisbrouwerij in Leuven, and tasted the new honey beer created by Mark Knops. Mark is a busy man, as he also brews for Achel, De Haalve Maan, Malheur and other breweries. I enjoyed the new Domus brew, as the honey was not overdone. It's an enjoyable beer of 6.5% abv.

Many thanks to Gunther Bensch (who created the first Tripel Gueuze beer, Vicardin) for being "Bob" for a couple of days. Look for more info about Gunther and another new beer in future posts.

There were many great highlights of the trip, but I have to say that my several hour visit at Brouwerij Girardin was probably the top. Heidi and Paul Girardin were wonderful hosts, and it was a day I won't soon forget. Seeing the beautiful copper brewkettles, copper koelschip, mash tun and wooden casks where the superb Girardin beers, such as the Jonge and Oude Lambik and Gueuze Girardin 1882 are created, was fantastic. The whole brewery is a shrine to lambic beer, and another of Belgium's national treasures.
Due to their extreme rarity, photos from inside the brewery will only appear in my printed articles. None will be shown on the Internet.
A similarly long visit at De Proefbrouwerij, with Dirk Naudts as host, was also very memorable. It's amazing how many great beers De Proef makes, in so many different styles.
The brewery is very high-tech and very clean as well. More on De Proef in the future, such as about a certain collaboration beer with a highly-regarded midwestern brewery. Yum.