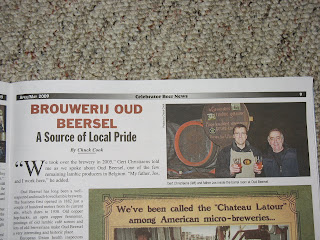 I have a 1,100 word article on the Oud Beersel lambic blendery
in the April/May issue of Celebrator Beer News.

I visited Oud Beersel last November 21st, with my friend
Danny Van Tricht. It was a cold day, but the Oud Beersel
brews soon warmed us!

Gert Christiaens and his father, Jos, took over the historic site a
few years ago. They purchased Oud Beersel from Henri Vandervelden.

Bureaucrats from the European Union forced Vandervelden to close
the brewery in 2002, due to new food and hygiene regulations that
are considered to be a vast waste of time and energy by brewers and
beer lovers in Belgium.

Seems that bureaucrats are the same all over, eh?

I hope that everyone enjoys the article! Hopefully Celebrator
will put the entire article on its website at some point.

Celebrator Beer News can be found at places like Max's on Broadway
in Baltimore, RFD and the Brickskeller in D.C., Monk's Cafe and
Nodding Head in Philadelphia, Sly Fox in the Philly area, and
Mug's Alehouse in Brooklyn, among other places on the East coast.

Photo: Father Jos and son Gert, inside a room filled with old
brewing tools and equipment 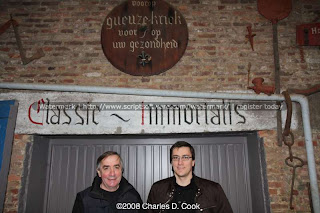 Photo: inside the barrel room at Oud Beersel. The lambic beer is HERE! 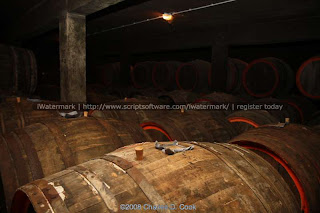 Do they brew at all? Or are they strictly a blender? If so, where do they get their lambic and did they ever brew?

Hey Craig,
They can't brew at Oud Beersel unless they put in a new brewing installation. Blame the EU bureaucrats for that.
Oud Beersel gets their wort from Boon (Boon uses the old Oud Beersel recipes to produce the wort) and then Gert puts this wort into the original Oud Beersel barrels for aging, and does all the blending himself.
Same process at De Cam and Hanssens....

Thanks, I will keep updating!

Which Belgian beers are available on the island of Bali, Indonesia?