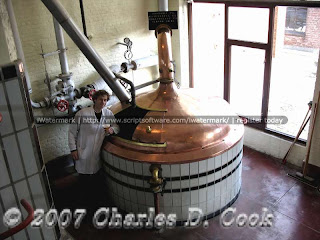 
I have had a couple of new articles published within the last week or ten days, and more are on the way.
In the December 2008 issue of Celebrator Beer News, I wrote about the historic Brouwerij Slaghmuylder in Ninove, East Flanders. Slaghmuylder brews the Witkap beers as well as fine lagers such as Kerstbier and Paasbier.
The brewmaster is Karel Goddeau, who is also the blender of the excellent De Cam lambic beers. I visited Geuzestekerij De Cam last month, and tasted the De Cam Lambic, Kriekenlambic and Geuze on draft at the De Cam Volkscafe, which is just yards from the blendery.
In the December 2008 issue of Ale Street News, I wrote about Brouwerij Contreras in East Flanders, and their delicious brews, as well as the new beers being imported by 12 percent imports in the NYC area. These breweries include Brasserie Cazeau and Brouwerij Contreras, among others.
I also mentioned the closing of the atmospheric HopDuvel cafe in Ghent, but have since learned that HopDuvel, which has been a beer specialty cafe since 1980, will reopen this month!
Additionally, I have a big, 3000+ word Belgian feature due out in a well-known beer magazine within the next 10 days.
Merry Christmas to everyone. Enjoy those Belgian Christmas beers! 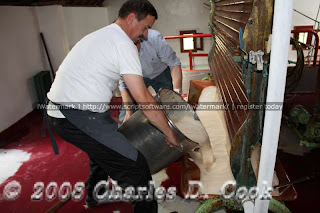 Photo: pouring yeast into a baudelet heat exchanger at
Brouwerij Contreras in Gavere-Asper, near Ghent.
This is hands-on work! 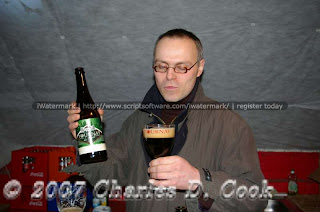 Laurent from Brasserie Cazeau in Templeuve, Hainaut province, with the fine Tournay de Noel.
Posted by Chuck Cook at 10:42 AM