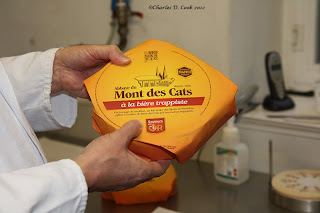 I know it's not about Belgium, and not directly about beer...
but here's a link to a little slideshow I put together from photos of
my tour at the Trappist Abbaye du Mont des Cats Fromagerie
in northern France. French Flanders, to be exact.

One of their four cheeses is made with their beer, which is
brewed at Chimay.

They also have a shop and a tavern/cafe/brasserie on site
where you can purchase both their cheeses and beer. It's
well worth the visit if you love cheese and beer, which yours
truly surely does. The shop's website is here

Danny Van Tricht and I visited on a cold December day. A
day when both the main roads were closed due to construction,
and the last remaining road coming from the Poperinge area,
just 15-20 minutes away, was a winding, narrow country lane at
best. With snow or ice on the ground, it would be nearly impassable.

Brother Bernard-Marie greeted us in the Abbey, where we talked
about cheese and beer. He told us that the Abbey was founded in
1826, and cheese making began in 1849. There was also a
brewery as well from 1848 until the First World War, when the
German army took away the copper kettles.

We then headed to the Fromagerie, where we donned white
lab coats, hair nets and special rubber shoe covers. Tours are
rarely given at this cheese-makery. In fact, I'd say the
workers were shocked to see visitors, especially those toting
cameras.

The tour was quite fascinating, and seeing cheese ripening
is becoming a welcome site for me. The milk is provided by
local farms, and most of the Mont des Cats cheese is sold in the
local region, while a small portion makes it to Paris and also
to Belgium.

For more info about the abbey and their products, see here
Posted by Chuck Cook at 5:32 PM