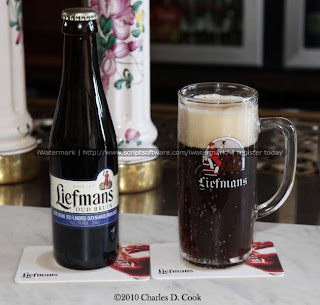 I visited Liefmans, the iconic brewer of sour brown ales and respected kriek brews, on Thursday, June 3rd. It was a beautiful, sunny day, with a high around 80 degrees and low humidity. Was I really in Belgium? 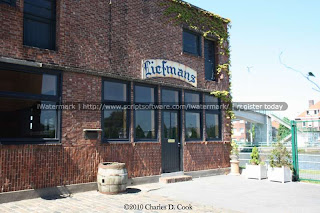 A week after my last visit, in December 2007, a bankruptcy court had forced Liefmans to stop operations and close. Fortunately for the beer lovers of the world, Brouwerij Duvel-Moortgat made the best offer for the brewery site, equipment, brands, and beer stock about six months later, and now owns Liefmans. 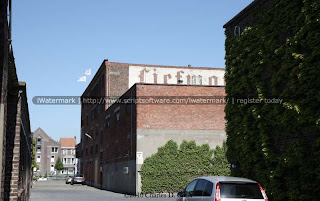 Duvel-Moortgat brews a quality wort at their headquarters in Breendonk, and then transports it by tanker truck to the Liefmans site in Oudenaarde. The wort-or unfermented beer-is then placed into two huge open copper fermenters (with a capacity of 230 and 460 hl) where it spends a week maturing. It is then transferred to closed fermenters. The Riva Group, which formerly owned the brewery, used the same process from 1991 till 2007. 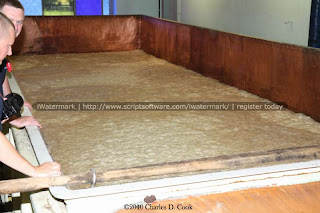 Photo, above: open fermenter at Liefmans 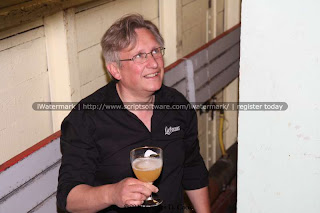 Photo, above: site manager Marc Coeessens with a glass of
wort, right from the open copper fermenter

Sitting in the open fermenters for a week exposes the wort to whatever wild yeast strains may inhabit the brewery, and lends a pleasant tartness to the beers. “It’s really a mixed yeast culture here” Site Manager and tour leader Marc told us. “There are the ale yeasts used to brew the wort, and the wild yeasts that produce a lactic acid bacteria which gives the beer its tartness,” he added. 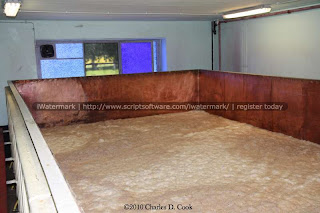 The Oud Bruin is aged for a minimum of two years, and both it and the Goudenband are a blend of older and younger beers. 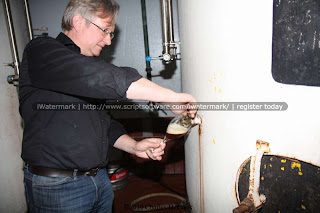 Photo, above: site manager Marc Coeessens pouring a glass of
Oud Bruin from a fermenter 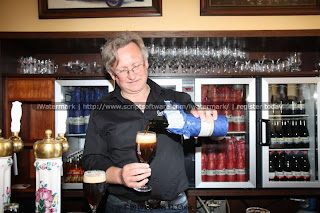 Photo, above: Marc pouring a Goudenband in the tasting cafe

My group (which included Belgian journalist Danny Van Tricht, as well as Christophe and Stefanie from De Bistronoom, Ostende’s great new beer cuisine restaurant) were given samples of the wort from the copper fermenter. Yum! “This wort is for the Kriek” Marc told me. “You’ll taste the finished product soon!” he added. 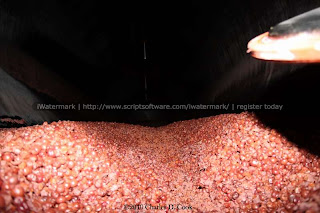 Photo, above: cherries in a fermenter

And indeed we did. Off to the Kriek/Cuvee Brut fermentation hall we soon went, where we tasted several versions of unsweetened Kriek, dating from 2006, 2007 and 2008. It was absolutely fabulous, especially the 2006 and 2007 vintages. The 2009 was not being used yet, so we did not taste that one. Each of the 18 massive fermenters in this hall holds 700 hl (about 587 US barrels) of beer, for a total capacity of nearly 13,000 hl. 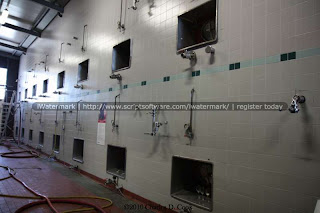 Photo, above: the fermentation hall where the Kriek/Cuvee Brut matures

However, the tanks are never completely full of beer, as the cherries take up a lot of space. In fact, each fermenter holds about 9,000 kilos-nearly 20,000 pounds- of cherries when full. The tanks with the aged vintages held about 400 hl worth of beer at our visit. 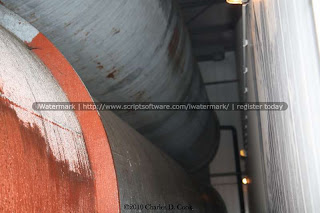 Most of the cherries used are grown in Belgium, but some are sourced in Denmark. When available, that is. These cherries are of the Stevens variety, and are a bit hard to find: “They are very dark red in color, and very similar to the ones from Schaarbeek, near Brussels” Marc told me.

Unsweetened Kriek to return in Belgium (!!!)

I have good news for those living in or visiting Belgium: the Liefmans unsweetened Kriek is set to make a comeback, on draft only, at a few selected cafes. Hotel/Restaurant Erasmus in Brugge may be the first.

Erasmus used to have the unsweetened Kriek on draft from time to time in the last decade. It’s quite possible that Bierhuis Kulminator in Antwerp may again have this tart, satisfying, complex brew on tap soon as well. In fact, Marc told us that Duvel-Moortgat won’t offer the beer at the Duvel Depot, but only to a few select places. When I mentioned why not have an outlet in Brussels, Ghent or other cities as well, he did not seem opposed to the idea: “We will not make any publicity about the unsweetened Kriek. You will have to be a beer lover than knows about it. We are limited in production and don’t want to publicize it world-wide” Marc continued. 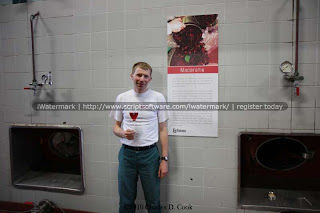 Photo, above: Elfried (who handles the fermentation) with a glass of
unsweetened kriek, right from a fermenter

As to the possibility of brewing again on site, Marc told us: “We did consider re-starting the brewery, but the adaptations and changes that would have to be made to it to make it meet the modern food safety rules are too extensive to make it worthwhile. So we will continue to brew the wort at Duvel-Moortgat.” 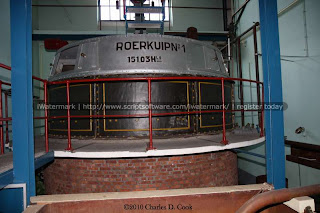 Photo, above: one of the brewkettles in the original 1930 brewhouse 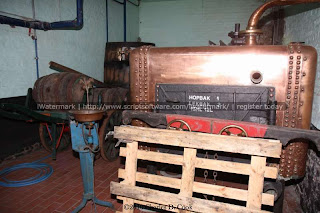 Photo, above: the hopback form the 1930 brewery


5,000 hl of beer was produced at Liefmans in 2009, mostly of the Cuvee Brut. “We intend to double the production soon” Marc added. “We will even start to advertise the beers on TV and in print” Marc mentioned. 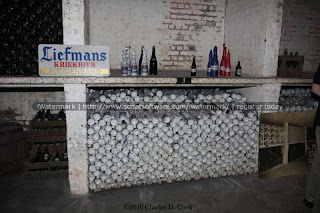 Even as Liefmans looks to the future, it looks to the past. We toured the cellar, as I had done in 2007, and looked over the hundreds, nay, more like thousands, of bottles of past vintages of various brews, primarily the Goudenband. 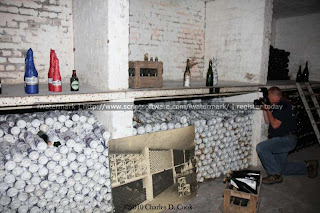 “We’d like to take the beers out and refurbish the cellar a bit, perhaps paint it” Marc told us as we marveled at 37.5 cl, 75 cl and Magnum-sized bottles of aged treasure. “and then put them back in.” 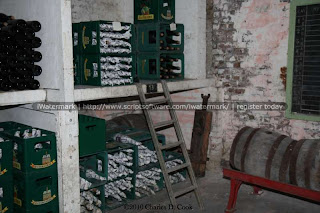 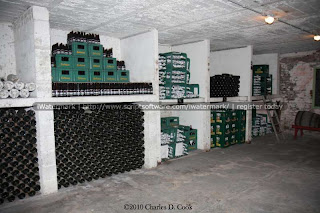 As to the huge tasting hall/restaurant space at Liefmans, replete with a bar full of Liefmans beers on tap, it’s now rented out to a company that holds weddings, parties and other events. 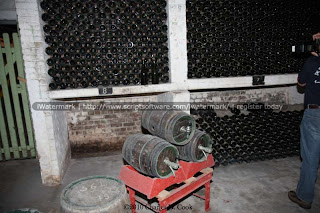 Sounds like I need to book a stay at the Hotel Erasmus. I'm so glad they are releasing those beers, even if its really limited.

Great to hear what our friends are up to. Need to get over there when I can get some of the unsweetened kriek.

Is that open fermantaion method similar to how Gueuze is produced?
Thanks for a very informative and interesting read. I am a great admirer of Belgian beers and spend five days there every year, from the UK.

Hi Bazza, the primary fermentation for the Liefmans beers takes place at Brouwerij Duvel/Moortgat in closed fermenters. So it is not exactly like Gueuze, though the week spent in open fermenters at Liefmans does add a nice tartness to the beers.