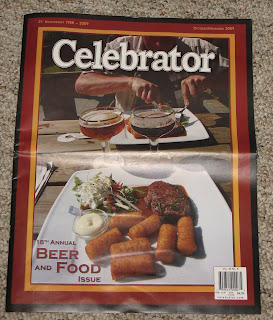 Things are breaking fast and furious these days, as I recently had several articles published. More are on the way in November and December!

The most recent is the October/November issue of Celebrator Beer News.

My article "Eating and Drinking at Two New Trappist Cafes" is the cover feature.

In fact, the cover shot is a photo I took of a meal at the new "proeflokaal" or tasting room, at La Trappe (Koningshoeven) in Tilburg, the Netherlands. It was taken on a beautiful spring day in late April, sitting outside on the patio. The Dutch would call it the terrace...

That's Trappist beer lover Danny Van Tricht enjoying a meal of Trappist-raised beef and croquettes on the cover. I ordered the same dish, and my lunch is front and center in the cover photo. It was a sumptuous meal!

The article also covers the new Cafe Trappisten at Westmalle, and a fine meal I savored there a few days later, in the company of my friends Craig and Mary from Milwaukee, and Gunther Bensch, who acted as "Bob" that day (aka designated driver!)

There is also some other interesting information thrown in...but you'll have to read the nearly 900 word piece to find out what!

Celebrator can be found at better beer bars, breweries and other beer destinations. For subscription info, see: http://www.celebrator.com.

For anybody that has ever asked me why I lug around a Canon digital SLR on many trips (as it is much bigger and heavier than a point and shoot) this cover shot tells the tale.