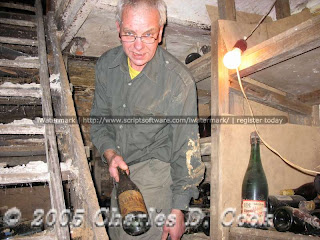 Well, two weeks without a post. As you might guess, I have been incredibly swamped lately.
I am writing a number of Belgian beer and brewery reviews for a new book due out later this year. I've written over 6,000 words in the past two weeks, and have about 3,500 more due within a few weeks.
I also am working on a big 2,500 word feature article on Brouwerij Girardin.
I'll be at SAVOR in D.C. this weekend, so I'll be writing during the week.
I also have another 3,000 word feature due for a new magazine by mid-June.
My Belgian beer blog at Beer Connoisseur on-line should go live in a couple of weeks.
Did I mention I was busy? Phew.
One of the beers I am writing about for the book is Moinette Blonde. The photo with this post is Dirk Van Dyck in the cellar of the Bodega cafe, with a Moinette from the 1970's.

Thanks Chuck, hang in there. It's always a pleasure to read your writings and worth waiting for.

I'm interested to hear what you have to say about one of my favorite beers, Moinette Blonde.