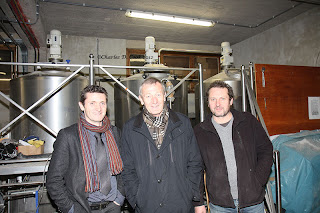 (Photo, above: from left, Dr. Filip Delvaux,
Dr. Freddy Delvaux, and Peter Delvaux,
inside the new but still under construction
brewhouse, at Brouwerij De Kroon.)
There are a lot of very interesting projects going on in the Belgian beer world
right now, and I’ve had the privilege of visiting many of them in the last couple
of years.
One that really stood out during my December 2012 trip will be a major
destination spot for beer lovers from around the world. The principals involved
are big names in the Belgian beer world, and internationally.

(Photo: the site before renovations began.)

Professor Emeritus Freddy Delvaux of the Katholieke Universiteit Leuven, and
sons Dr. Filip Delvaux and Peter Delvaux, are working on a multi-purpose site
called Biercentrum Delvaux and Brouwerij de Kroon.
This translates as "Beer Center Delvaux and the Crown Brewery." 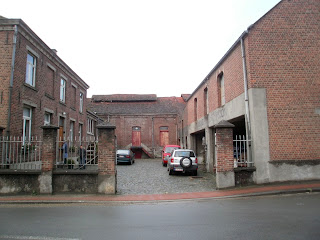 (Photo: a look from the street.)

Dr. Freddy Delvaux is an expert on brewing science, quality control, and recipe
creation who worked at what is now AB-Inbev in Leuven for 17 years, and then
went on to create a laboratory of brewing science at the University in Leuven,
where he has worked to this day. The lab began with a 60-liter test brewery and
was later expanded it to 500 liters. Courses on brewing science are offered, and
the brewing school at KU Leuven has awarded over twenty doctorates.
His son Filip was awarded his Ph.D. for his studies on Belgian witbier, and
has worked at the University lab for 15 years himself. The two formed a
consulting company where they perform quality control, recipe creation, and
lab analysis for about twenty breweries, most of which are in Belgium. 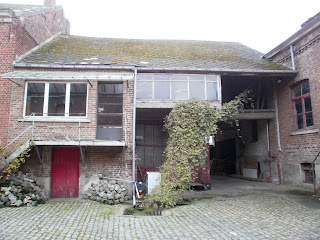 (Photo: part of the brewery complex prior to
renovations.)

During my visit on 14 December, Filip told me: “I usually visit each one
of the breweries we consult for about once a month, to discuss the results of
our analysis from the previous month, and to pick up new samples for testing.
So we always have fresh beer here.”
That’s certainly a nice advantage of visiting breweries on a regular basis!
Freddy then mentioned: “About 3 or 4 years ago, we started thinking about
doing something different, as normally I would have to retire at age 65 in
Belgium. I’m past that by a couple of years now, and will likely retire from
my position at KU Leuven in the near future. So, we looked for a suitable
site for our plans and found this place.” 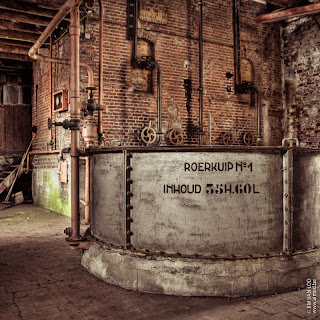 (Photo: a brewkettle in the old brewery.)

The locale is Brouwerij De Kroon (The Crown) in Neerijse, a little town
about 10 km south of Leuven. De Kroon opened in 1897, and closed in
1972. The German army took away the brewery’s copper brewkettles
during the First World War. The circa 1920’s to 1930’s brewhouse still
exists, with a mash tun, direct-fired boiling kettle, and a coolship. The
boiling kettle is 35 hl in size. 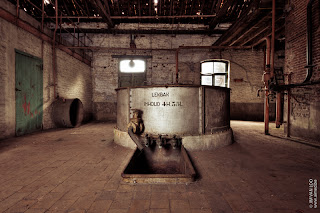 The old brewhouse still needs renovation, and will be a museum when it
opens. The last owner’s grandson still lives on site, and will conduct tours
of the old brewery. Look for a couple of 1955 Opel Blitz beer delivery
trucks to add to the museum experience. Very cool, it shall be. 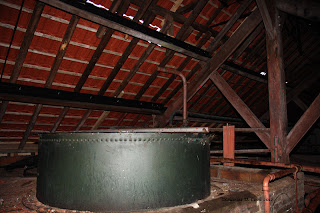 “Let’s see the new brewery now,” Dr. Filip Delvaux suggested. I agreed,
without hesitation. “This is a 5-hectoliter (about 4 U.S. barrel) Italian built
Velo system, where we will make many experimental beers. It is fully
automated, so we can do as many as three or four batches a day if we want,”
Freddy commented. He continued: “We will serve these beers in the brewpub
that will also be constructed here. We’ll have piping running under the brewery
to the brewpub, and there will be four duotank serving vessels there.”
Filip added: “We haven’t yet decided how many taps we will have in the
brewpub. But there won’t be too many, as we want to make sure all the beer
served here is fresh. At first, all our beers will be exclusively served on site.
Down the road sometime, maybe we will offer special cafes some of our beers.
But that is something we will decide in the future.” 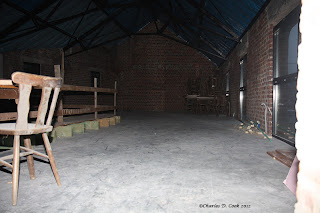 (Photo: this will be the second floor tasting room,
where tastings and lectures will be given. It is above
the brewpub's main floor.)

“We additionally have some old recipes from the old De Kroon brewery, and
we may try and recreate them on our new brewery,” Filip commented, smiling.
“We will also have guest beers on tap and in bottles from the breweries that we
consult for,” Freddy remarked. Some of the experimental brews may end up
being new beers at breweries that enlist the Delvaux’s services.
Above the brewpub, which will serve food, including beer cuisine, there is
a tasting room where courses/lectures about beer will be given. I suspect that
some of the brewers reading this article will be sitting in that room taking a
course in the not too distant future…and that you will be loving every minute
of it!!
Peter Delvaux ran an event management company for 15 years, and he will
manage the brewpub, marketing for it, and events associated with it.
Barrel-aging, you ask? Yes, indeed. Ask and ye shall receive: “It’s another
very interesting thing that we want to do here, and we will have barrels in
the cellar, aging various things. But we won’t tell you all our secrets about
that yet,” Filip commented, grinning. 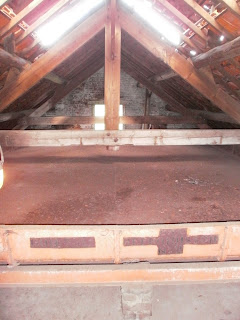 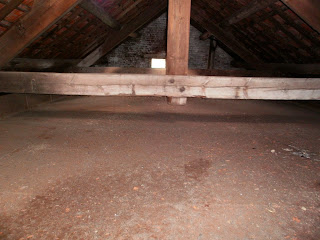 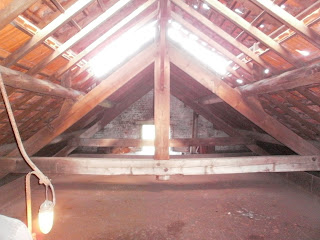 (Photos: the coolship/koelschip in the old
brewery.)

Hmmm, with a renovated coolship in the old brewery, and barrels in the
cellar…it makes one think of what goes on in places on the south and west
sides of Brussels. Places like Beersel, Itterbeek, Kobbegem, Lembeek,
St-Ulriks-Kapelle, and Vlezenbeek. But I won’t mention the “L” word here.
Neerijse is in the Province of Flemish Brabant, as is the Payottenland.
Will spontaneous fermentation be a part of Brouwerij de Kroon? Only time
will tell, but my fingers are crossed for the answer to be….yes! J 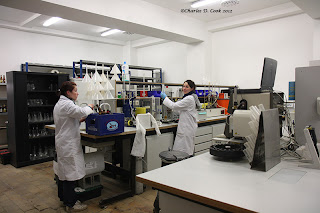 (Photo: inside the new lab at Biercentrum Delvaux.)

The lab that Drs. Freddy and Filip Delvaux ran at the University in Leuven
was moved to the new site in mid-November, and it is now officially named
Biercentrum Delvaux. “Beer starts and ends here. So, we got the lab up and
running first,” Freddy remarked. It is definitely a high-tech laboratory, as
demonstrated by the equipment I saw inside. Two women were conducting
labwork during my visit, late on a Friday afternoon. I had the feeling that
sipping a Belgian beer wasn’t too far off in their future that evening. 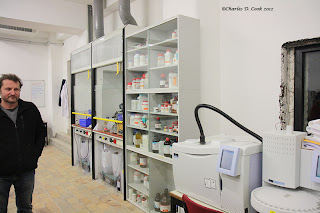 (Photo: inside the new lab.)

“This is what we call a beer center. Science, tasting, history, and brewing,”
Freddy said, beaming. Filip added: “To summarize, Biercentrum Delvaux
is the brewing lab which serves the Belgian brewing industry with technical
consulting, an analytical lab, product development and research. Brouwerij
de Kroon will encompass the old museum brewery, the new, small-scale
brewery, and brewpub with tasting room. There, you can learn about ancient
and modern brewing, and taste house-brewed beers, and a selection of
Belgian specialty beers. In short, it will be the place to be for Belgian beer
lovers!” 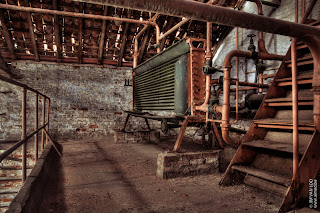 (Photo: a baudelot/heat exchanger in the old brewery.)

As is obvious from the photos, the project is still a work in progress. The
Delvaux’s began brewing on February 12, and plan to open to the public
on April 22nd. That, my friends, is the weekend before the Zythos Beer
Fest (ZBF), which is Belgium’s biggest. 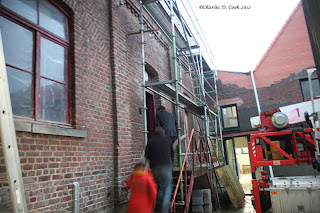 (Photo: the old brewery under renovations.)

“We started work here on 28 April 2012,” Freddy told me, as we sipped
a brew after my visit. “It would be nice to be open within a year, especially
by the time of the ZBF weekend.”
Happily, it looks like that will happen! However, please note that the
April 22nd opening date is not an absolute guarantee. You never know what
can come up at the last minute when opening a new brewery, restaurant, and
the like. 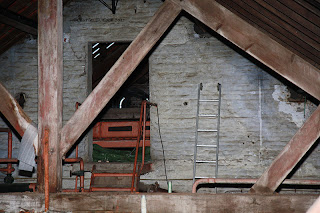 (Photo: on the second floor of the old brewery,
where the coolship is.)

I have even more good news for those taking public transport in Belgium:
there is a bus that runs from Leuven and stops at the brewery, which runs
till 11 pm weeknights, and till 2 am on Friday and Saturday nights. It takes
about 15 minutes. I’m not going to tell you which one, yet, until the marvelous
new beer destination is open to the public.
Cheers to Biercentrum Delvaux and Brouwerij de Kroon!! 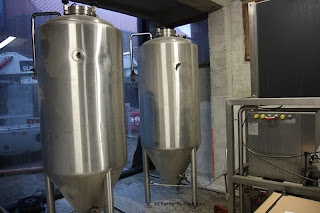 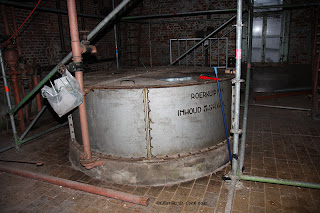 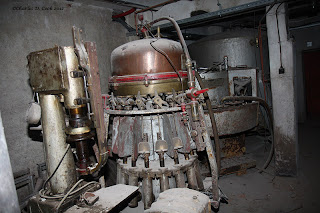 Thank you for your outstanding Belgiun beers. My friend Frank Peeters from Hombeek brought me there. my name is Robert Kump and I was there on your opening day. What a privilege. Peter took us on a tour of both the old and new breweries. I am from California I will spread the word, so you can expect visitors from this part of the world
Please keep me informed of latest developements in the brewery. My E-mail address is kumpfam@me.com
Thanks again Robert Kump Nipomo, California USA