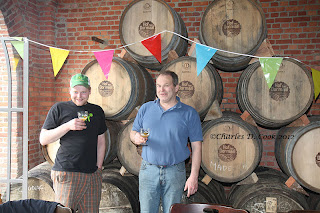 
Yours truly was just there to check it out. 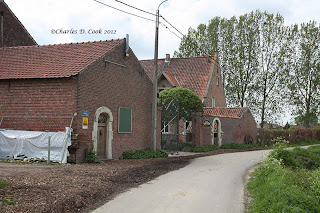 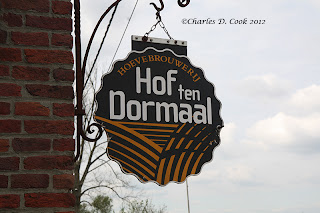 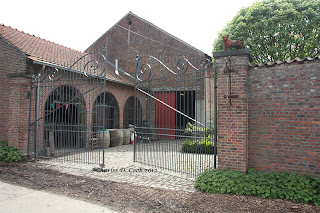 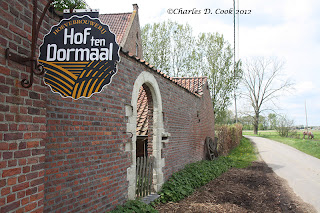 (Photos, above: Brouwerij and farm of Hof ten Dormaal.)

Hof ten Dormaal, located near Tildonk in the northeastern part of the Province of Flemish Brabant, near Haacht, has added new blond and dark ales to their lineup. Both are 12% abv. What’s even more exciting is that these beers will be aged in barrels that recently contained Armagnac, Cognac, Jenever, Madeira, Port, and Sherry! 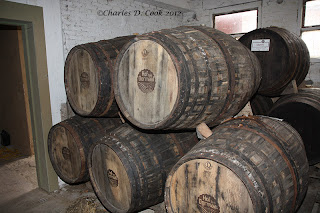 Owner  André  Jannsens told me during my visit on May 1st: “I went to France, Germany, Italy and Spain in search of freshly used barrels. It’s pretty easy to find good used wine barrels, but hard to find Cognac and Armagnac. I developed a relationship with a small producer of those in France, and I was there when these were emptied.” 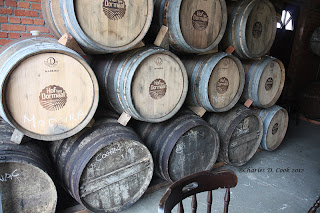 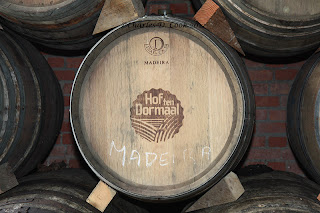 André’s son Dries, Hof ten Dormaal’s brewer, went to Portugal in search of Madeira barrels. “There is a firm that builds these barrels (new) in a little town about 30 km from Porto. They sell them to the Madeira makers, and then buy them back once used a few times. The firm, J. Dias & CA, SA, then sells the used barrels to whiskey producers, and us, as you can see. They even branded the barrels with our logo.” 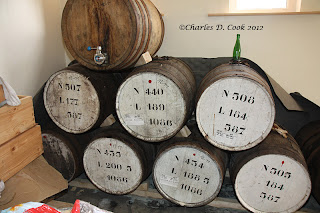 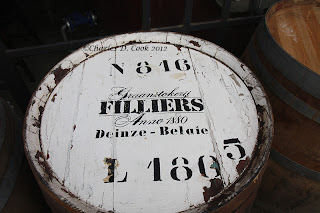 (Photos, above: former Jenever barrels. They were also former wine,
then whiskey barrels.)

The former Jenever barrels were first used by a winery many years ago, then by whiskey makers for over 50 years. They then held Belgian Jenever for 20 years. Now, they will contain beer. That’s a great run of…alcohol maturation! 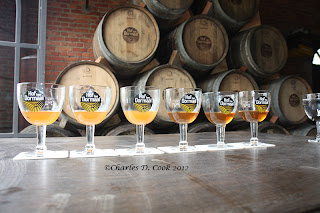 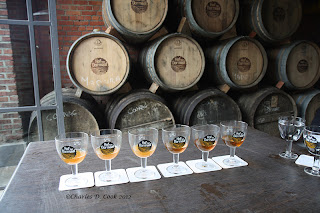 (Photos, above: a tasting of six different barrel-aged beers
in the brewery tasting room.)

The same base blond and dark ales will be used for all the barrel aging: “The only difference will be which barrel the beer is aged in,” André commented. As the nuances from these brews will come from the barrels, the hop content is very minimal: “These beers only have about 1/3 the hops of our Amber and Blond Saisons,” Dries mentioned, as we tasted a sample from each of the six different barrel-aged brews. 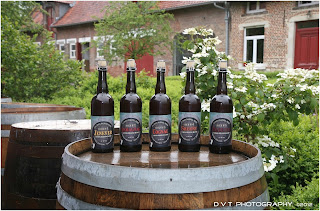 “We will age the beers for about 2 months in the barrels, then they will be put into 75 cl corked bottles. A small amount of sugar will be added at bottling to spark a refermentation,” Andre told me. There will be about 2,000 to 3,000 liters per bottling for each of the different barrel types. So that makes somewhere between 3,000 and 4,000 bottles for each flavor, so to speak. Most of Hof ten Dormaal’s barrels hold between 400 and 600 liters each.

Why two months as maturation period, you ask? “Professor Freddy Delvaux, who is the Head of the Center for Malting and Brewing Science, at the Katholieke University of Leuven, recommended this. He advised me that with freshly emptied barrels, it should take about that length of time to impart the character of the former wine or spirit into the beer within the barrel,” André told , as we sipped a delicious Cognac-barrel aged sample. 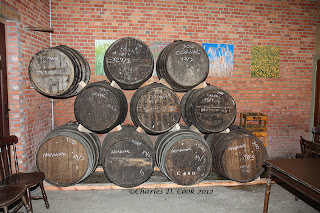 Only the Armagnac, Cognac and Jenever versions had reached full maturation at the time of my visit, and I was very impressed by them, especially the Cognac version. I hear Prof. Delvaux liked the Armagnac version best.  The rest of the samples only had about 2 to 4 weeks aging time, so they were young, but with great potential, I think.

An early bottle run took place in mid-May, just a few days ago. The beers will be labeled as: Beer Nr. 1-Jenever; Beer Nr. 2-Armagnac; Beer Nr. 3-Cognac; Beer Nr. 4-Sherry; and Beer Nr. 5-Madeira. No beer from the Port barrels have been bottled yet, but that would assumedly be Beer Nr. 6. 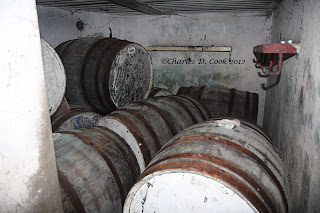 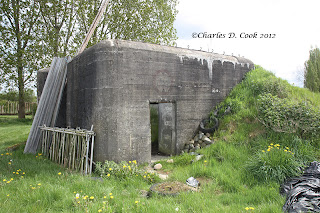 (Photo, above: former cider barrels in an old WW II blockhouse
on the farm. They are not being used at this time.)

“I also bought some used Aquavit, Grappa and Sauternes barrels, and I even have some used cider barrels as well. But I have not decided as yet what to use these for,” André remarked.
“Also, I think I have found the perfect place to store our barrels. As you can see here, we have no cellar at the brewery, and we don’t have an extensive amount of room. There was an old Abbey one kilometer from here, and the cellars are 200 meters long, and 5 meters wide. That is a huge space. So, I think we will relocate our barrel-aging project there, and also possibly install a small bottling line in the future. The reason for this is that we want to limit the possibility of infection in the brewery. So, we will keep our Saison beers and barrel-aged beers separate,” Andre stated.

It may be some time this autumn before we see these brews stateside. They will be imported by 12 percent imports/Brian Ewing. See here

Hof ten Dormaal is also adding a new bottling line soon. They had just poured a new concrete floor in the room where the bottler will reside before my visit on Belgium’s Labor Day, a national holiday. In fact, at least 25 cyclists stopped and asked if they could pop in for a beer on that warm sunny Tuesday, as the country backroad is popular cycling area. 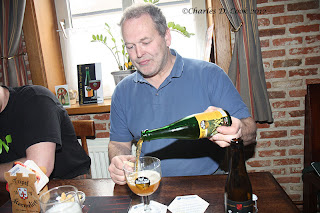 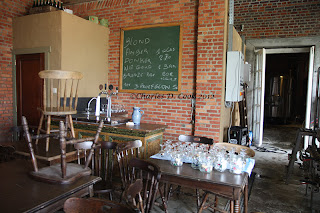 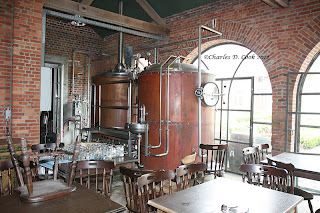 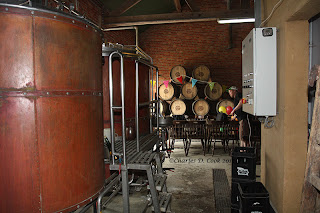 (Photos, above: inside the brewery.)

The brewery is best known for its Blond and Amber Saison/Farmhouse ales, as well as the Witloof beer. Witloof is Belgian Endive, considered a delicacy in Belgium. They also craft a winter brew in season. 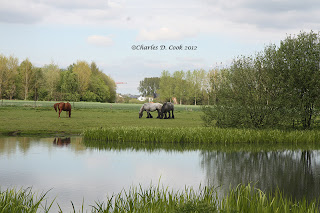 (Photo, above: the pond and Belgian draft horses
on the right.)

Hof ten Dormaal produces all the hops and malts needed for their beers on their farm. They even have a pond and pasture across the road, with several authentic Belgian Draft horses. It’s an incredibly serene and beautiful spot, and its tasting room is open from 1 to 5 pm most Saturdays. They are also open for beer sales from 6 to 8 pm on Tuesdays and Thursdays. See here for more info. 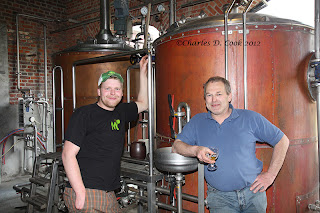 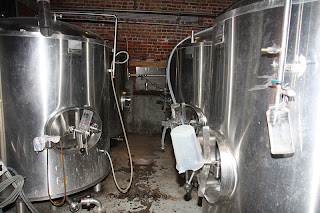