Gunther Bensch...anyone stateside looking for a Belgian brewer? Plus Girardin and Bienvenue a Montaigu 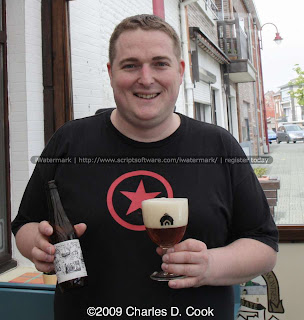 Gunther Bensch, 32, knows a thing or two about lambic beers. He represents the lambic brewery, Girardin, at several Belgian beer festivals throughout the year. The Girardin Oude Gueuze 1882 is one of the great lambic beers of Belgium. “My mother used to give me a table beer from Brouwerij Haacht, instead of cola, when I was very young” Gunther told me, as we talked after our tour of Girardin in April 2009. “She said beer was healthier than a sweet cola” he continued. Table beer is typically about 1 to 2 percent alcohol by volume; a good training wheels beer.
“Later, I drank Horse ale when I was about 14, and then someone shared a bottle of the Girardin with me when I was 16. By then, I knew I really liked beer. I worked at an Interbrew plant for three summers, beginning when I was 16. I became a disc jockey when I was around 20, and spent a few years doing that. When I was 26, I enrolled in brewing courses at CLT in Ghent. I also joined beer appreciation clubs and started homebrewing. Then in 2004, I first visited Girardin. I really like lambic beers” Gunther said, smiling. “In 2006, I created the world’s first Tripel Gueuze. It was a blend of Girardin White Label Gueuze, and Dilewyn’s Vicaris Tripel, which is brewed at De Proefbrouwerij. Nowadays, my beer is Bienvenue a Montaigu, which I have brewed to my recipe at ‘t Hofbrouwerijke in Beerzel. It has 7.5% abv, and uses some wheat in its recipe. So, it has more body than a normal Tripel, yet is a little lighter in alcohol. You can have two of these in an evening.”
Gunther’s future plans? “I really like the USA. I would like to get a job as a brewer somewhere there, and stay and build a life.” Anybody need a Belgian brewer? Shoot me an e-mail. Seriously. 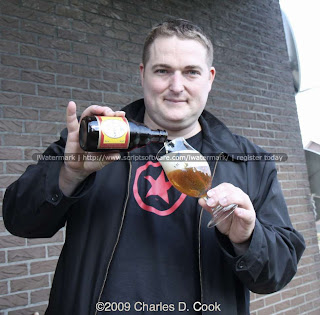 “My mother used to give me a table beer from Brouwerij Haacht, instead of cola, when I was very young” HAHA, that is an OUTSTANDING quote.

Had beers with Gunther last night at Max's in Baltimore, MD kicking off Beer Week. Hell of a nice guy. I'm a home brewer and as you might imagine, had plenty of questions. He answered all of my questions graciously, and, we drank loads of great new beers (including one of his Triples. What a treat!