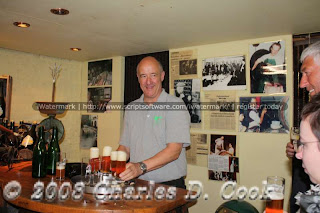 
The best time of the year is upon us-Autumn-and it's also time for me to return to Belgium, for the 18th time.
I'll visit about ten breweries, the Brugge beer fest (http://www.brugsbierfestival.be/en/beer_festival_bruges-1.html) and the Quintessence at Cantillon. See http://www.cantillon.be/br/Cantillon.php?lang=3&page=18.
I'll also visit quite a few Belgian cafes that are far off the beaten path, which is always fun.
The Brugge beer fest this weekend with feature about 200 beers from 55 breweries.

As I've been so busy planning for the trip, I did not have time to post about my articles in the October/November issues of Ale Street News and Celebrator Beer News.

I had an article on Rodenbach, as well as my "Belgian Babble" column and a short piece on the Manhattan Cask Ale fest at Chelsea brewing, in Ale Street News.

I had lunch with Rodenbach owner Jan Toye in NYC in September, and he told me that a second batch of the Vin de Cereale is in a foeder (oak barrel) aging. We should see bottles of batch 1 (375 ml size) in the US at some point. He also gave me some other possibly exciting news: the brewery is considering direct bottling from some foeders with no blending.

This is important, as each indivual foeder has its own microflora and distinctive flavor. Brewmaster Rudi Ghequire gave me and two friends, Daisy Claeys of Brugs Beertje and Stephen Lipps of Mid-Atlantic Brewing News, tastes from half a dozen foeders during our tour May 22. Each was very different, and two really stood out as superb. Given there are 294 of these oak barrels at Rodenbach, perhaps there are more of these gems. I hope this idea becomes a reality

Rodenback Grand Cru, and the Foederbier served at places like Belga Queen in Brussels and Ghent, are typically blends from several different foeders. Rodenbach has never bottled a batch right from a single foeder, as far as I know.

I also had an story called "Beer and Food Celebrated in Belgium" in Celebrator Beer News, where I wrote about the excellent Belga Queen in Ghent, which has superb beer and food. I covered the world-classic Drie Fonteinen restaurant, brewery and new LambikOdroom tasting cafe in Beersel as well, and the excellent Brasserie Erasmus in Brugge.

Did I mention I'll be returning to Drie Fonteinen?

More about trip 18 after my return! 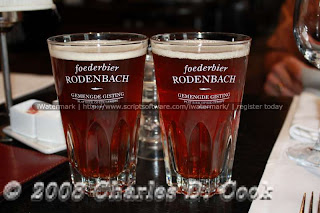