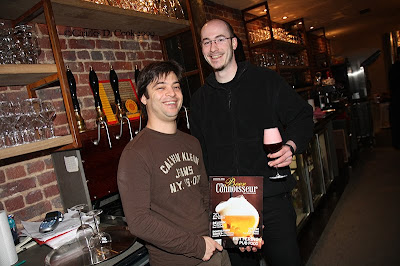 (Photo, above: Nassim Dessicy (left) and Andy Mengal
(right) behind the bar at Moeder Lambic Fontainas.) 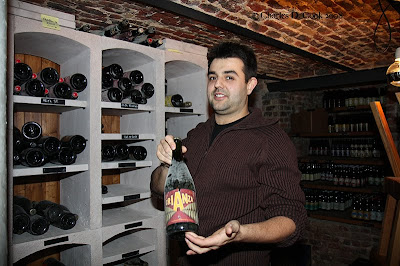 (Photo, above: Jean Hummler in the cellar of
Moeder Lambic, Ixelles.)

When Nassim Dessicy and Jean Hummler purchased the
original location of Chez Moeder Lambic in 2006, they
wanted to transform it into a top class beer cafe, where
the staff were always knowledgeable, friendly and helpful. 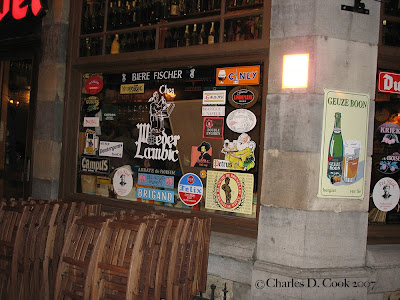 They also decided to offer over 400 well-chosen Belgian brews
by the bottle, and five on draft. Chez Moeder Lambic, in the
Ixelles neighborhood of Brussels, was regarded as one of the city's
top beer cafes within just a couple of years. For more on the
history of this Brussels icon, see: Moeder Lambic Ixelles

Wanting to follow their great success in Ixelles, the pair, along with
partner Andy Mengal, opened Moeder Lambic Fontainas
on October 30, 2009.

The new location, at Place Fontainas #8, is a ten minute walk
from Brussels' famous Grand Place. It is in a much larger space than
the original, hence many more beer lovers can be accommodated. 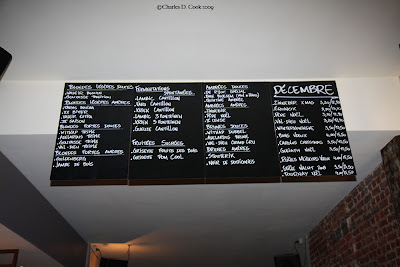 (Photo, above: the beer board.)

Nassim, Jean and Andy also wanted something else to distinguish
themselves from the EU capital's other specialist beer bars. So,
rather than following the usual Belgian model of huge bottled beer
lists, the trio decided on having a large draft list (for Belgium) of
40 taps and six cask beer engines, of very special brews.
There is no crap on tap here.

The new formula has met with fabulous success, as Moeder Lambic
is known as the place to taste many rare and not-often-seen-on-tap
beers in "The Beer Country." (Photo, above: Dupont's Cervesia is one of the bottled brews
available at Moeder Lambic Fontainas.)

"We do have about 50 Belgian beers in 75 cl bottles, as these are
great for people to share," Andy told me during a visit in December
2009. 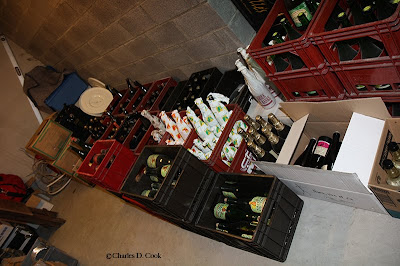 (Photo, above: beers in the cellar at Moeder Lambic.)

The only beer available in a small bottle: Orval. 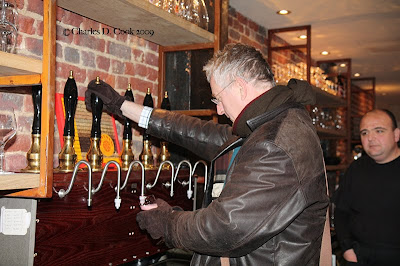 (Photo, above: Tim Webb, author of "The Good Beer Guide
to Belgium" trying his hand at pulling a lambic from a cask.)

Here's a really special draw of Moeder Lambic, especially for
fans of sour beer (such as....me.): the six cask beer engines
almost always have lambic or kriekenlambics on. Want a
Cantillon straight lambic or faro? You can get it at the brewery
or either location of Moeder Lambic, and nowhere else.
3 Fonteinen is another favorite, as is De Cam, when
available. 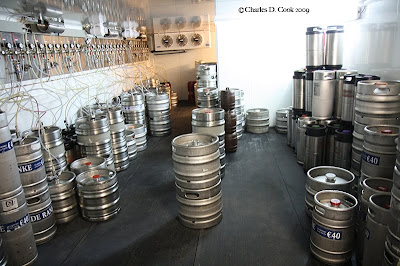 "About our draft lines," Andy told me, as we toured the keg
cooler. "They are only about 4 meters (about 13 feet) long,
whereas the lines at many bars are 20 to 30 meters long.
The short length makes them very easy to clean. Also, we
change them quite regularly. Cleanliness is of utmost
importance, so the beers we offer will taste as fresh as possible." 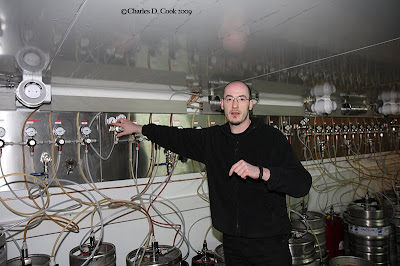 (Photo, above: Andy Mengal in the keg cooler.)

He added: "The temperature in the cooler is about 5 degrees

The vintage beers as well as the handpumped brews are served
at 12-14 degrees Celsius (54-57 Fahrenheit.)

Due to their years in the beer business and contacts throughout the
Belgian beer world, Moeder Lambic's 40 taps always have many
interesting choices. You can find beers from respected breweries like
Brussels own De la Senne, as well as Jandrain-Jandrenouille,
De Ranke, La Rulles, Blaugies, Cazeau, Contreras, De Ryck, Dupont,
and many more.

Moeder Lambic also offers brews from other countries, such as Italy,
Spain, Germany and Denmark from time to time, and seasonal beers
are popular as well. 11 Christmas and winter brews were on draft
during my visit in December 2009. 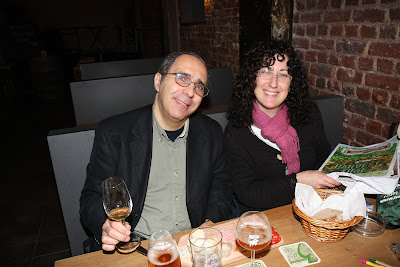 (Photo, above: these beer lovers are all smiles at
Moeder Lambic.) 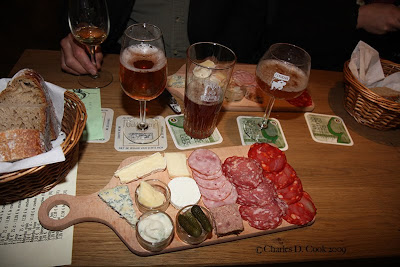 While not a restaurant, Moeder Lambic is not lacking for sustenance.
The plate of delicious local cheeses, meats and bread really hits the spot.

I think I'll have one when I visit again in March. Along with a few bieres.

Good review Chuck:
I just went there at the beginning of last week, never been there before and it was a tremendous afternoon with a lot of beer :-)
I am probably luckier than you: it takes only 2 hours for me to have a beer there :-)
Best
Michael

Fantastic review! The pictures of the keg cooler are stunning! I'm headed to Belgium in May for the first time and can't wait. You have an excellent website too.

Michael, no doubt that selection of Belgian beers on draft there is amazing.

Holzbrew, you are in for a treat in May!

Will have to add this to my list for my Belgium trip in the summer!! I've ordered my Belgian Beer book too :)

These are great places indeed! I'll probably be at Fontainas tonight... By the way, the other one is not in Ixelles but in St Gilles (8, rue de Savoie)!